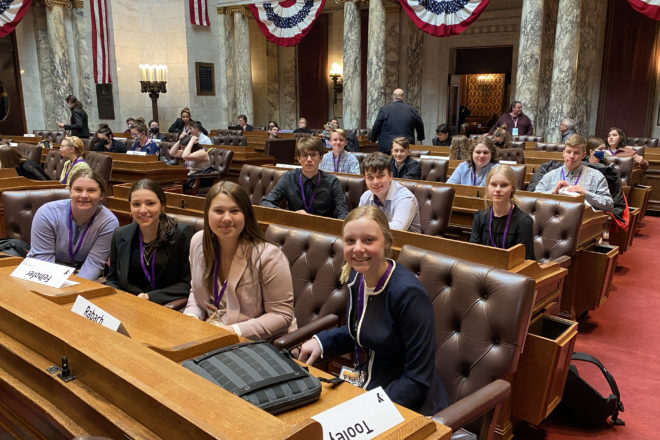 Members of the Door County Y’s Youth in Government program participate in the Model Government Weekend at the Capitol in Madison March 4-6. Submitted.

Scout Feldman signed up for the Door County Y’s Youth in Government program for the same reason so many teenagers sign up for things: peer pressure.

“My sister had done it, and she promised she was going to do it with me,” said the senior from Sturgeon Bay High School. “Then she didn’t.”

Feldman was a nervous, scared middle schooler at the time, but what began as a way to hang out with her sister became a horizon-broadening experience in building confidence, empathy and appreciation for how the guardrails of the world she’s growing in are shaped.

“I’m politically involved,” Feldman said, “but I definitely don’t want to go into political science – just because I’m someone who avoids conflict. But being involved in Youth in Government definitely makes me more aware of how to go about conversations the right way. And advocating for the things I am passionate about.”

Feldman is one of 25 local students who participated in the Door County Y’s Youth in Government program this year, 15 of whom made the trip to Madison in February for the Model Government session to debate bills and form a functioning government in the chambers of the state Capitol.

Jacqueline Barlas, Malia Bicoy, Abi Tooley, Conor Waterstreet and Feldman all had bills signed into law by the student government. Southern Door’s Yana Zenefski was elected to serve as next year’s speaker of the Assembly, and Sevastopol junior Alana Rabach was elected lieutenant governor.

Rabach said the experience in Madison was a thrilling experience.

“It allowed me to voice my opinion more and be more comfortable voicing my opinion,” she said. “I’ve been a lot more confident in myself in the classroom and in life in general. It helps you be a stronger person – not be afraid of what others think.”

Rabach has had dreams of going to law school since she was in fourth grade, and her time in Madison debating bills and standing up and speaking before her peers solidified her aspirations.

“One could say I’m a pretty argumentative person,” she said. “I like sticking up for what’s right. I love the legal aspect of it.”

Feldman and Rabach said their biggest takeaway, however, wasn’t how to fight for their own views, but to listen to and understand others.

“Listening is one thing, but one of the hardest things is listening and asking to know more,” Feldman said. “If you don’t understand something, to ask for clarification, and ask why it is that way, if it can be changed, how it can be changed – actually understanding what people are saying.”

Students learn parliamentary procedures, rules of address and how to communicate professionally without making personal attacks on those with differing opinions.

“You learn how to advocate for your position without ignoring other opinions and to allow your own opinion to be changed,” Feldman said.

Her comments can’t help but make you think the program might be good for the other folks who occupy the chambers of the state Capitol.

“It really makes you have an open mind,” Rabach said. “There’s a totally different thing of criticizing someone, and respectfully disagreeing.”

Feldman said going from the peninsula to Madison to debate people from around the state was eye opening.

“Just having exposure to all those different people, from different backgrounds and hearing what they have to say is really cool,” she said. “What’s happening in Ukraine was a big topic, and everyone was behind Ukraine when we were there. But when you talk about what people should be doing about it, there are vastly different opinions about what might happen.”

Rabach’s father, Casey, said he was impressed with the impact the program had on his daughter.

“She came home talking about it, and I haven’t heard one negative aspect,” he said. “Through the program, she got to know Judge David Weber and make connections with him, and [Door County District Attorney] Colleen Nordin is part of the program. It’s a really great learning experience.”

Tyler Powell is the program and innovation executive at the Y and has been involved in coordinating the program for six years.

The program culminates with Model Government, where students get to use the state Capitol; sit in the chambers of the Senate, Assembly and Supreme Court; and debate bills, argue cases and cover proceedings.

“Model Government weekend is one of my favorite weekends of the year,” Powell said. “The adults are really not involved. To see these students running a functioning government, it gives you some hope for the future.

“The attitude people have in general in politics is divisive. This is a really important program for our own general public discourse.”

Powell said for Rabach to be a first-year participant and be elected to statewide office is unheard of, but it’s a version of a growth progression that he sees annually from kids in the program.

“Watching the students progress from their first day to the end of the year and through years of the program is inspiring,” Powell said. “Just to see them able to stand up and speak comfortably about a subject is so amazing. Scout has done this since eighth grade, for example, and it has been fun to watch her progression.”

“Our kids come from very diverse backgrounds,” Powell said. “Sometimes students will argue for a position they don’t agree with, but they do it to learn to debate and speak and be empathetic – to put themselves in other people’s shoes.”

The bill Feldman authored that passed at the session was an example of that empathy. It sought to expand accessibility to emergency services for those with hearing or speech disabilities by mandating text-to-911.

Her interest in the topic grew out of studying sign language. Seven years ago, a friend wanted to learn sign language but found it was incredibly difficult to learn on your own. Feldman joined her and has continued to study since, and she plans to become certified when she attends college at UW-Eau Claire.

“I spend a bunch of time thinking about what they’re experiencing,” she said. “Right now those with hearing or speech disabilities can make a call and then hope they can track their phone. Otherwise, it’s incredibly difficult for them to have the same access to services as the rest of us.”