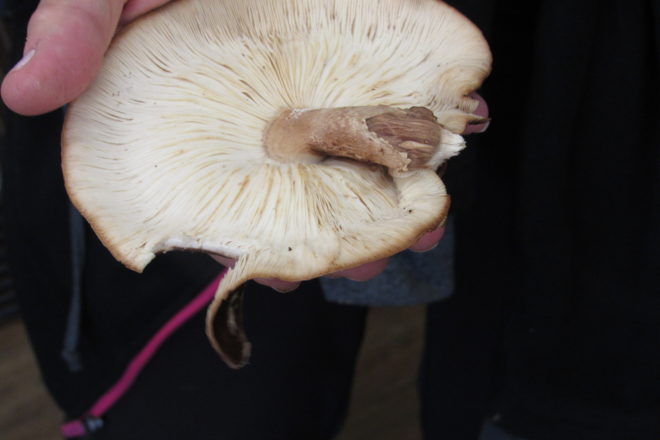 A shiitake in the hand of M.J. Jansen, who assisted her husband, Steve Shapson at a mushroom-cultivation class. Photo by Craig Clayton.

There’s nothing as lovely as a tree stump to mushroom hunters.

At this time of year, they’ll tramp to secret spots in the woods and tolerate mosquitoes, mud, thorns and perhaps poison ivy in search of oyster mushrooms on stumps or treasured morels near dead elms and in leaf litter in the woods.

But a dozen fungi fans ventured Saturday into the great indoors, a Ridges Sanctuary classroom, to learn how to grow their own.

Shapson, a cheesemaker and former photojournalist, has been cultivating mushrooms for personal use for more than 12 years.

“We preorder and inoculate hundreds of logs,” the Mequon resident said. “The ones that are wood-grown, I feel like are more flavorful.”

“You can buy a toilet paper kit,” he noted. “It’s not very sustainable to keep inoculating a toilet paper roll to grow oyster mushrooms. So then I graduated to logs.”

Demaris Martinez and her daughter Antonia are from the state of Oregon but also have a place in Sister Bay and were among the people learning to grow mushrooms in their backyards. They told Shapson they mainly hunt for chanterelle mushrooms and were hoping to learn to grow some others. He said he’s jealous, because they’re so easy to find in the woods in Oregon. 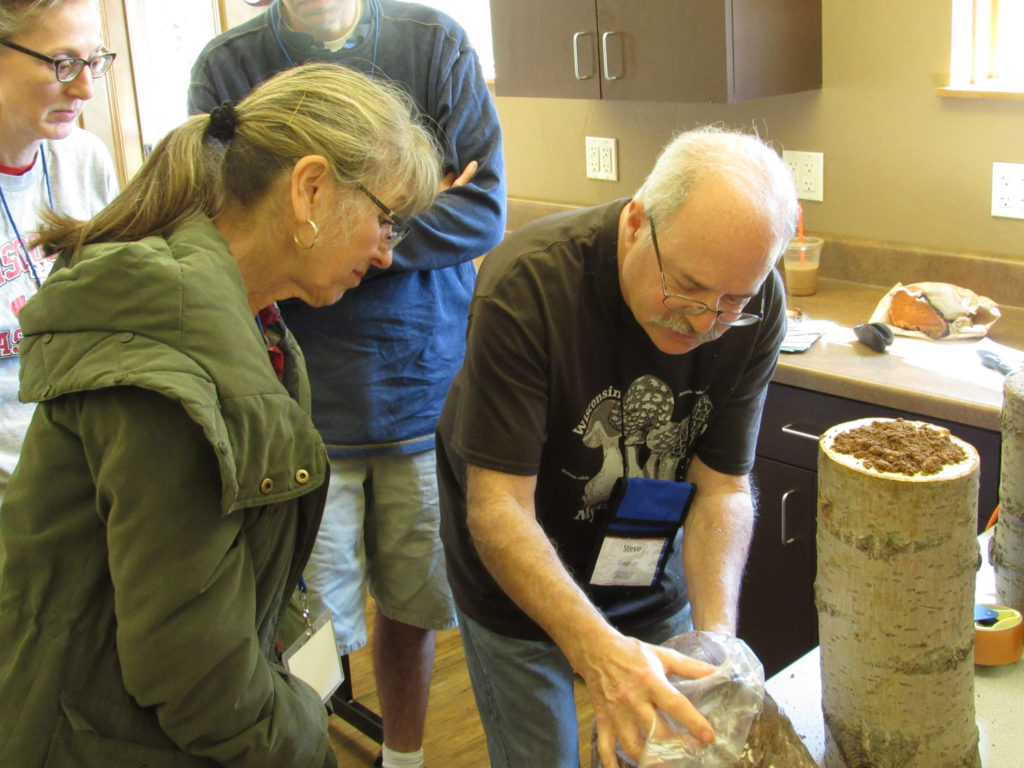 They watched closely as he made finger-width, inch-deep holes into a white oak log with a drill, not one of those wimpy battery-powered drills, using a high-speed auger bit. He then had class members, including Antonia, press sawdust infused with mycelium strands that will make shiitake mushrooms into the holes, and then they dabbed melted wax from a warmer over the holes.

Shiitake in Japanese means, roughly, mushroom of the oak. But he grows them on ironwood and sugar maple in addition to white oak and red oak. How do you identify ironwood? Not with a metal detector. Of course, look it up in a field guide or online. But seminar student Marjorie Andrae of rural Egg Harbor said the bark looks like elephant skin. Shapson said ironwood trees are quite common in Wisconsin.

“Usually mushrooms fruit the following year,” he said of how long he has to wait after infusing a log to produce a delicacy.

Saturday’s class was free, but mushroom cultivation isn’t a free activity. For some classes, Shapson charges a fee, but that covers the cost of a log or two and a volleyball-sized bag of spore and spawn in moist sawdust. He gets his for about $16 or $20 from Field and Forest of Peshtigo (fieldforest.net) and says it will produce a whole lot more than $20 worth of mushrooms.

Because he inoculates so many logs, (and then piles them strategically in a log-cabin-like configuration, near a sprinkler) he also buys a $36 metal inoculator tool to quickly collect a plug-shaped sample of sawdust from the bag and then to pop it into the drilled hole.

Field and Forest also sells wood furniture pegs affected by the mycelium. They can be hammered into the hole.

The class learned how to drill holes in poplar, aspen or cottonwood logs to make oyster mushrooms, too. Shapson also showed them how to spread some of the mushroom dust on the cut end of a two-foot-long aspen log, cover that with a sheet of aluminum foil, tape that down, and then do the same with the other end.

He then puts that into a black plastic bag to speed the development, and stacks another similarly treated, slightly smaller log on top of that in a totem-pole setup.

Mulch from a store likely won’t work as well for growing wine cap mushrooms. He said a bag of material for wine cap mushrooms can be spread and mixed into the equivalent of a 20-by-20-foot, 3- to 4-inch-deep bed of wood chips, which might be in a flower garden with varieties that can tolerate moist but not soaked soil.

He said the wood chips need to be unpasteurized and not chemically treated. He tries to make friends with tree services so they’ll give him chips – or for the inoculation method, to get 4- to 7-inch-wide logs that aren’t usually sold as firewood and would likely go right into the wood chipper.

If the power company is out trimming trees, he’ll ask them to leave behind some of the chippings or logs. The chips should be mainly from the aforementioned deciduous trees and contain no more than 25 percent pine – too acidic. The mushrooms pop up to propagate. He said you don’t have to keep adding mycelium once the wood chip bed is affected; he just adds more wood chips the next year.

Most important, he said, the logs and chips should come from cuttings when the tree is dormant, such as March. That way, the sugars have been stored in the log, not out in the leaves. He also said for poplars and relatives, those trimmings or logs can be used if they’re cut (or fell after a storm) after they’ve had their annual growth spurt — usually after July.

Dan Andrae of rural Egg Harbor said he has several old poplars that he plans to use for mushrooms.

“I spend thousands of hours working on invasives,” he said of his on-property war against aggressive autumn olive and honeysuckle bushes. After munching on a shiitake morsel sautéed by Shapson’s wife, M.J. Jansen, he said of mushroom growing, “This might be a hobby, too.” 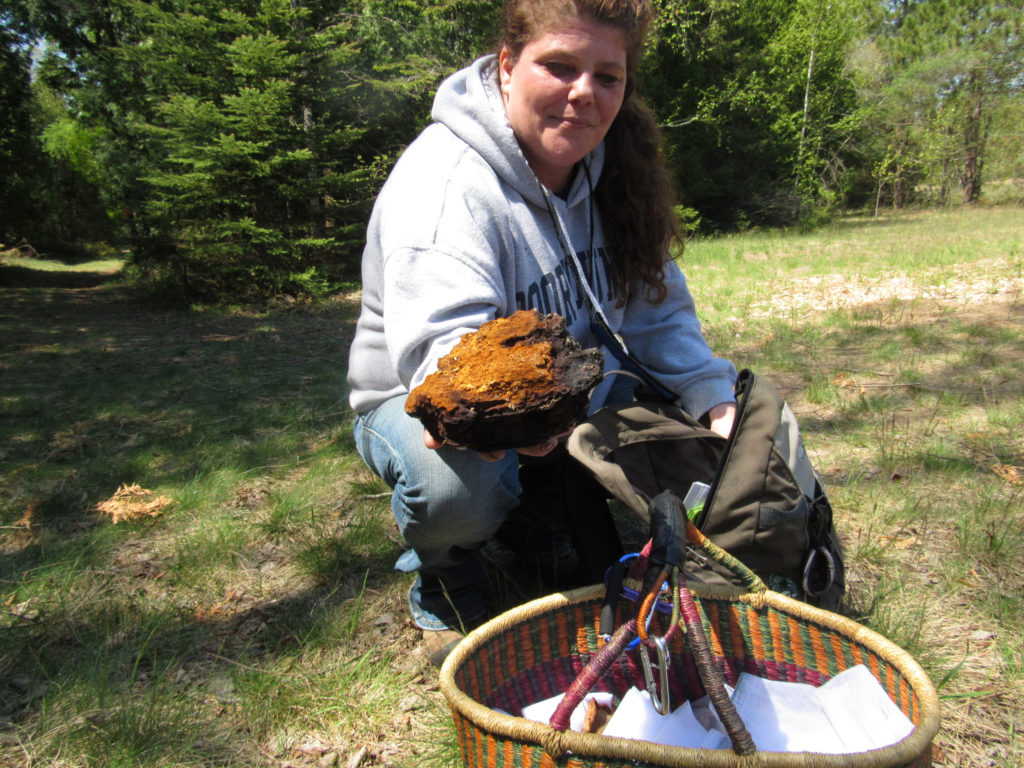 Shannon Pump holds a chaga mushroom she found on a birch tree during a foraging hike with visitors to the Door County Festival of Nature at Ridges Sanctuary. Photo by Craig Clayton.

She helped them find oyster mushrooms on trees in the poplar family as well as an unusual mushroom, a chaga, which looks like a chunk of rotten lumber attached to birch trees.

She makes tea from chaga, putting a fist-sized mushroom in a four-quart crockpot with water overnight, and steeping it on low. It makes two pitchers of tea that tastes of coffee and vanilla.

She told the group the mushroom is believed to help with memory, immunity and more.

In addition to oyster mushrooms and chaga, she said she often finds morels in Door County into early June. The county has one of the longest seasons she knows of for morels, starting in late April.

She finds wild mushrooms from spring into late fall. She sells them sometimes, and some years are better than others. Drought years are the worst.

“The one thing about having this business (Wild Door) is I’m at nature’s mercy,” she said.

M.J. Jansen talked to a group of fungus fans about a different way to make a batch of small, personal-sized pizzas using a relatively large shiitake mushroom as the “crust.”

Remove the stem. It can be dried and ground up to use in sauces later.

“Just grill the shiitake with a little olive oil and kosher salt,” she said.

Then sprinkle it with fresh herbs of your choice, basil, oregano, pizza sauce, fresh tomatoes and add cooked sausage (or any other favorite pizza toppings).

Add cheese and then put it under a broiler until melted or turn down or move it away from the hot part of the grill and close the lid until it’s ready.