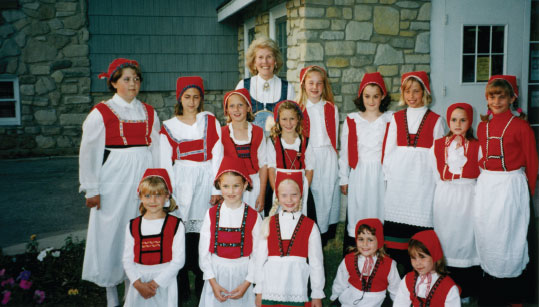 Each year on the weekend closest to the summer solstice, the Village of Ephraim undergoes a transformation. Normally a tranquil lakeside community, known for its pastoral atmosphere and deep sense of history, during this weekend the village unfolds into a flurry of activity for ‘Fyr Bal’—one of Door County’s best known, if least understood, cultural traditions.

This year, on June 18th and 19th, Ephraim will celebrate Fyr Bal for its 50th time. As in years past, locals will don traditional Scandinavian garb; young children will dance and sing to Norwegian music; artists, craftsmen, and food vendors will set up tents for their wares; fireworks will fill the sky; majestic bonfires will be set ablaze on the shores of Eagle Harbor; and a chieftain will be crowned following a ceremonious arrival by sea. On the surface, Fyr Bal seems to be an unusual little festival – as rare and charming as the village of Ephraim itself. A deeper look, however, reveals that Fyr Bal isn’t so obscure after all. In fact, it is a modern-day interpretation of celebrations that have occurred across the globe and throughout the centuries.

Fyr Bal, Norwegian for ‘bonfire,’ goes by many names in other cultures – St. John’s Eve, Sankhansaften, Litha, Kupalo, Jonsok, Juhannus, Pluneria Hiera, and Midsummer’s Eve, to name a few. These celebrations, though manifested differently in various cultures, share some fascinating historical connections, most obvious of which is their common observance of the summer solstice, when the sun reaches its most extreme northward position (or southward position in the Southern Hemisphere).

According to one historian, “the earliest [recorded] event that can be confidently said to have occurred on summer solstice [was] in 246 B.C., when the Greek, Eratosthenes, …happened to be at Aswan during the summer solstice. Looking into a well, he noted that the sun was absolutely, directly overhead.” By comparing this to a previous observation made on the same day hundreds of miles to the north and by applying his understanding of the earth’s shape and size, Eratosthenes was able to pinpoint with astounding mathematical accuracy the sun’s motion in relation to the earth’s equator.

Interestingly, historians have also determined that even older civilizations attained a profound comprehension of the sun’s motion – most famously at the Druids’ Stonehenge, but also in cave drawings dating back more than 16,500 years.

Throughout the ages, various tribes on the European continent independently began summer solstice celebrations, with a striking level of similarity between their customs. In pagan traditions, it was believed that lighting bonfires on Midsummer’s Eve helped to scare away evil spirits and was a necessary means of asking good fortune from the heavens, to which healthy harvests and fertility could be attributed.

Christian church, which created an official religious holiday, fixed on the 24th of June, to honor John the Baptist. In one interpretation of this pagan ritual re-appropriated into Christianity, an historian writes, “It was John who baptized Jesus in the River Jordan – for which service Jesus referred to him as ‘a burning and shining light.’ Accordingly, the Church could in good conscience instruct congregations to light their midsummer fires as they had always done – if only they would turn their thoughts to St. John instead of the sun.” So it was that the solstice celebration made this particular crossover into a new age, and continued into modern times as a significant and time-tested mythology.

The pagan roots of Midsummer’s Eve celebrations, however, proved to be difficult to fully eradicate, and picked up new symbolic elements throughout the centuries. Many cultures would set large wheels on fire and launch them from a hilltop down toward a river or lake. The distance the wheel traveled before the fire extinguished was said to be an indicator of luck to come. Other cultures constructed maypoles, and still others would burn ‘witches’ on the bonfires or send people, livestock, and other objects through the smoldering fire beds to appease their respective gods.

Present day celebrations throughout Europe have kept these age-old traditions alive, and in many countries official government holidays have been reserved for Midsummer’s Eve. In Sweden, the maypole and fertility rites are especially prevalent, as are feasts of pickled herring, schnapps, and beer. In Norway, where the holiday is called “Sankhansaften,” (a variation of “St. Johannes,” “St. John,” or “Jonsok”), mock marriages take place, also as a demonstration of hope for fertility. Finland’s celebration, called Juhannus, is characterized by dancing well into the night and feasting on traditional smoked fish cuisine.

Which brings us to present day Ephraim, where one of the few American versions of a Midsummer’s Eve celebration occurs. Fyr Bal borrows most heavily from Scandinavia in its customs – though, one could say, with less fanfare. Absent are many of the superstitious and macabre aspects of the early pagan and Christian rituals. Instead, Ephraim’s festival carries a nostalgic romance for the town’s original settlers, many of whose descendants comprise the town’s population today.

But, the overlap is there. Each year, roughly a dozen bonfires are lit around Eagle Harbor – and those who’ve seen the ceremonial fire lighting will tell you that the fires aren’t your ordinary campground variety. Large branches and logs are piled together, anywhere from 8 to 12 feet high, in the shape of tee-pees; and, just as Ephraim’s Scandinavian counterparts do, a ‘witch’ (in this case a small cloth doll) is burned on the main fire in front of the village hall to symbolize the death of winter and the triumph of light and warmth.

The similarities between the festivals of Scandinavia and Ephraim’s Fyr Bal are also evident in the crowning of the chieftain. Weeks prior to the event, villagers cast their votes to select a man or woman of the town who has demonstrated particular service to the community. Many famous Ephraim names can be found on the list of past chieftains, available at the Ephraim Foundation. The chieftain’s identity is kept secret, except to the person tabulating the votes, until he or she arrives by boat moments before the main bonfire is lit. Music, dancing, and singing commemorate the occasion as the other bonfire attendants follow suit around the bay.

Joyce Gerdman, owner of the Evergreen Beach Hotel and granddaughter of Edward Knudson, an early Ephraimite, has been an organizer of Fyr Bal since its first year in 1964 (the name “Fyr Bal” wasn’t decided upon until 1965). She remembers that the first festival commenced when many of the people in Ephraim realized “there was something worth preserving with the Norwegian background, even though by that time there were many other [ethnic] backgrounds here.” Joyce also speaks fondly of her experience being selected as the chieftain (an honor also bestowed on her father) in 1993. For the occasion, Gerdman purchased a “bunad” – an elaborate Norwegian dress, sewn with traditional symbols. The tradition of Fyr Bal has continued with Gerdman’s daughter, Diane Jacobsen, current head of the Ephraim Business Council, who is also involved – both in organizing the festivities and in training the young girls to sing and dance to traditional Norwegian music.

In reviewing the long history of the summer solstice celebration, it’s clear that Ephraim’s Fyr Bal is more than an ordinary summer event. With this 50th anniversary, Ephraim reaches a milestone – one that not only guarantees it a place in the history books, but also confirms its lively sense of heritage.

Come June,
Friends and strangers,
Women and children,
Gather in vague observance
Of antiquated Pagan ritual
Shedding no tears
For the Winter Witch
They cast her to the flame.
Behold the burning
Of the frozen effigy!
Rejoice in bursting
Of Summer’s
Glowing golden warmth!

Come June,
I journey
To the forest’s tower
And watch the ritual’s glow.
Under silent stars
Flames burst
In twinkling splendor
Along the water’s edge.
My sight stretches
Beyond the limits
Of my eyes.
One after another
Fires are lit
Around the harbor
While children dance
And scream —
Cheering symbolic death.
And all stand round
In solemn respect
As the pyres fade
And crumble—
Scattered embers
Floating off
On the water’s patina of light.
Though the fires die
The warmth remains,
Flooding the onlookers:
For this is festival time —
And Summer yet remains!

Come June
Cycles begin anew:
The flaming of another Witch,
The celebration of another Summer.
Though there’s always
Another Winter
Festivities continue —
Unquenchable —
For there will always be Summers
Waiting to follow;
And so, there will always
Be Junes!