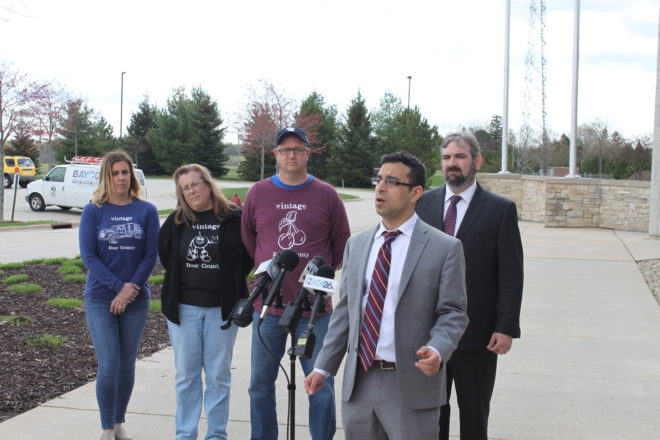 Milad Emam of the Institute for Justice outlines the case against the Town of Gibraltar at the Door County Justice Center. Behind him from the left are Jessica Hadraba, Lisa Howard, Kevin Howard and Robert Frommer. Photo by Jackson Parr.

The owners of the food truck at White Cottage Red Door may pursue litigation against the Town of Gibraltar if the town board does not rescind a town ordinance that was modified last year to prohibit food trucks throughout the town.

Meanwhile, the town may be pursuing legal action against the Door County Planning Department for issuing a zoning permit for the food truck.

In a press conference at the Door County Justice Center on May 10, attorneys from the Institute for Justice, a Virginia-based law firm, said the food truck ban was unconstitutional, and questioned the motives of the town board in adopting the ordinance.

“The Town of Gibraltar, at one of its board meetings, mentioned food safety, but this rationale makes no sense,” said Milad Emam, attorney with the Institute for Justice. “White Cottage Red Door’s food truck satisfies all of Wisconsin’s requirements for restaurant safety. That’s why Wisconsin gave White Cottage Red Door’s food truck a mobile restaurant license and no town can ban what the state licenses.”

Gibraltar town board chair Dick Skare declined to comment before speaking with the board and legal counsel.

“We just received [the notice] yesterday so I’m not in a position to say anything right now,” Skare said on May 10.

But the town’s attorney, Robert Gagan of Green Bay-based O’Neil, Cannon, Hollman, DeJong & Laing S.C., sent a letter to the Door County Planning Department on May 3 demanding revocation of the food truck permit.

Gagan’s letter was in response to an Oct. 2, 2017 letter from planning department head Mariah Goode, which outlined the reasoning for the issuance of the permit.

Goode said the food truck is considered a restaurant in a principal use structure, which is allowed in White Cottage Red Door’s zoning district.

“Your zoning permit of a mobile food truck in the Town of Gibraltar was issued in error and the Town requests that you rescind the permit,” Gagan wrote. “Please notify me whether your department will be rescinding the zoning permit or whether the Town will need to take further legal action.”

Goode responded to Gagan on May 11, explaining that the town had 30 days to appeal the permit. That clock technically started on July 28 when the permit was granted, but the town may not have been made aware of the permit at that time.

The latest the 30-day clock could have started was in September, when Skare visited the food truck and saw the state and county permits that were issued. The town then sent a letter to the planning department Sept. 19 asking for the permit to be revoked. Goode said the letter did not constitute a formal appeal, which has an application form and fee.

“Simply put, the time for appealing the decision at issue here has long passed,” Goode wrote in her response to Gagan.

The Institute for Justice bills itself as the nation’s only libertarian, civil liberties, public interest law firm. The firm has successfully litigated in support of food trucks in San Antonio, El Paso and Louisville.

Emam claimed the motives of the Gibraltar town board were protectionist for existing businesses.

“Gibraltar can’t run White Cottage Red Door and other vendors out of town just to line the pockets of established businesses,” Emam said. “Politicians should not be in the business of protecting restaurants from competition.”

Emam cited comments made in a Jan. 3 Gibraltar town board meeting, when Supervisor Steve Sohns said, “I can see how a restaurant should be up in arms over stuff like this.”

At that meeting, other board members clarified that protectionism was not the intent of the ordinance.

The Town of Gibraltar has 120 days to repeal the ordinance. If the town does not, White Cottage Red Door owners Lisa and Kevin Howard will formally file a lawsuit. It is unclear how any legal action from the town against the county will impact this timeline.

The Institute for Justice is working with Randy Nesbitt of Pinkert Law Firm as a local legal counsel.