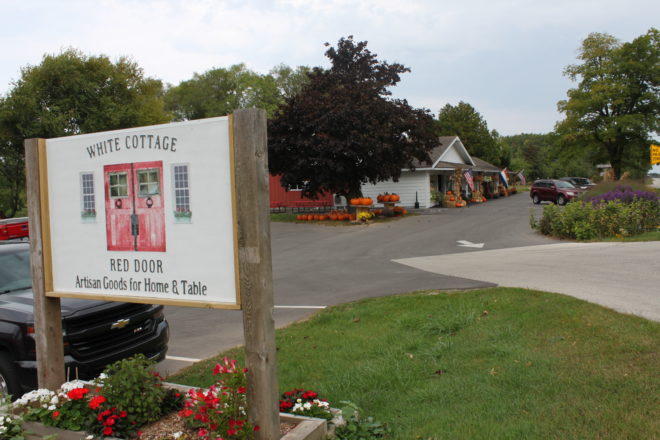 A food truck owned and operated by the new owners of White Cottage Red Door could become a victim in the Town of Gibraltar’s ongoing battle with the county planning department. Photo by Jackson Parr.

Door County Circuit Court Judge D. Todd Ehlers ruled that the Town of Gibraltar’s ordinance prohibiting food trucks was unconstitutional and had been enacted as a way to protect restaurant owners from competition. The Sept. 3 decision wipes the 2018 ordinance and subsequent 2019 amended ordinance off the books.

“I conclude that this systematic campaign to basically eliminate mobile vending within that area and to severely hamper it generally was nothing less than illegal and unconstitutional economic protectionism,” Ehlers wrote in his opinion.

The owners of White Cottage Red Door, a retail store on Highway 42 south of Fish Creek, brought the lawsuit against the town when, in 2017, the town shut down the food truck that the store owners operated on the property. The town then adopted an ordinance prohibiting food trucks, which the owners of White Cottage Red Door claimed was specifically intended to limit competition for existing brick-and-mortar restaurants.

Ehlers agreed, citing text messages between town board members and restaurant owners, and the town’s lack of evidence for claims such as traffic impacts and safety, loss of property-tax base or historic preservation.

The ruling does not restrict the power of municipalities to regulate private businesses or prohibit food trucks within their boundaries, but the purpose for such regulation must be related to some government interest such as public safety, zoning or aesthetics. Importantly, that interest must be clearly stated at the outset of the regulation and not as an argument before a judge during a lawsuit after the fact.

“I’m so excited about this victory, which has been years in the making,” said White Cottage Red Door owner Chris Hadraba in a press release from the Institute of Justice, the law firm representing Hadraba. “All I wanted to do was make burgers and barbecue to feed hungry customers. I’m so glad that the court’s decision to declare Gibraltar’s ordinances unconstitutional lets me do that again.”

Ehlers’ opinion states that the food truck at White Cottage Red Door has been sold, and the permits for operation are expired.

Gibraltar Town Board Chair Steve Sohns declined to comment, saying the case was not yet finished. The town may appeal the decision to the Wisconsin Court of Appeals.