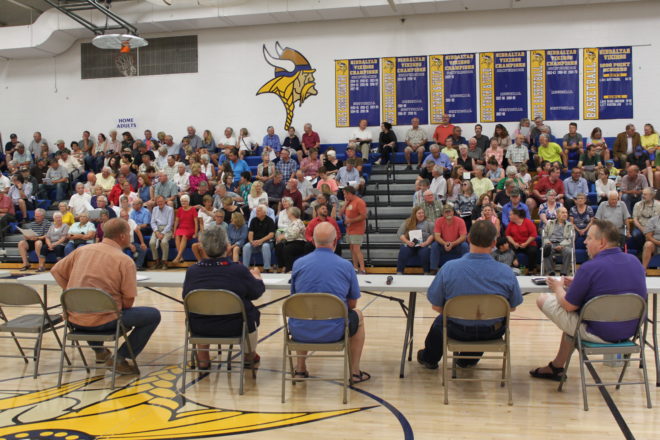 Gibraltar town electors rejected construction of a bathhouse at the Fish Creek Beach Monday night by a vote of 153 to 58.

“It’s back to the drawing board,” town chair Dick Skare said after the vote tally.

The proposed bathhouse would have cost approximately $850,000 and many voters spoke of sticker shock during the public comment period.

“We need toilets, and it would be nice if they would flush,” said one town resident. “I think you need to cut some of this other stuff out and just give us a bathhouse in Fish Creek.”

The total cost of the town’s proposed improvements at the beach comes to $2.1 million, including construction of a new pier, planning and engineering, but under state law town electors only get a say in the bathhouse portion of the project. The five-member elected town board will vote on the balance of the projects outside of the bathhouse.

At times the meeting, which brought together more than 200 residents and even more property owners into one room with a goal of unanimity, descended into chaos as people in the audience began yelling “Motion!” and “Second!”

One motion to approve construction at a price not to exceed $650,000 died after the second withdrew, citing the microphone that cut out as her reason for withdrawing.

In the end, the motion that rose above the cacophony was to approve construction of the bathhouse at the original $850,000 price tag, which failed.

Many residents called for a smaller and less expensive building while still being in support of the project’s concept.

“We did look at a smaller building footprint and it was $150,000 to $200,000 less,” said Pat Fehrenbach, engineer with the town’s contracted design firm, Short Elliott Hendrickson (SEH). “The discussion that led to this is that we’re never going to be able to build it this cheap again.”

Some of the talking points harkened back to a decade before, when the town expanded the town offices behind the post office at a cost, according to town board member Steve Sohns, that was six times greater than what it would have been had the town opted in for the expansion during construction of the post office years earlier.

“It gives everyone a little perspective on not thinking ahead to the future and how much it will cost us down the line,” Sohns said.

But town residents felt Gibraltar’s beach would never be large or popular enough year round to demand the size and scale of the proposed structure.

“We’re not going to be a beach town,” said Gibraltar resident Bruce Hill, calling for a less expensive structure. “We do other things in Gibraltar and we do them really well.”

Town electors will be called together again to approve construction of a bathhouse should the town pursue a new design. The town board is expected to proceed with votes on the pier, which will help manage stormwater.