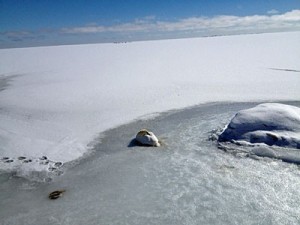 Vinni Chomeau sent this sad photo of a Mute Swan trapped in ice at Newport State Park. To the left, you can see where a duck was frozen in the ice, and the coyote tracks in the snow around the area.

One of the unexpected consequences of the severe winter was its effect on wildlife, particularly diving fowl that require open water to feed.

Last Friday, Paper Boy delivery driver Jerri O’Malley came across a weak Common Goldeneye and brought it to the Pulse office, where we discussed what to do about the injured duck. At first we thought it should be delivered to the closest wildlife rehabilitator, which is Bay Beach Wildlife Sanctuary in Green Bay. But when the duck seemed to perk up, Jerri said she would release it on open water.

We sent out a Pulse Picks about the Goldeneye, along with a story by naturalist Roy Lukes about how hard this winter has been on wildlife, which prompted replies from others who have witnessed disturbing situations for wildlife recently.

“Last week I hiked the shoreline at Cana Island and at Newport State Park,” wrote Vinni Chomeau in an email. “The ice was beautiful, but at Cana Island I observed a duck stuck in the ice still alive and several that had died stuck in the ice – their feet frozen solid into the ice. They were past the ice mountains or frozen waves in deeper water with thin ice which made it unsafe to walk out to them. Then at Newport State Park in a one-mile stretch of shoreline I found three more dead ducks with their feet stuck in the ice and a swan stuck with its feet frozen into the ice that was still alive.

“The water was deep and the ice in plates that were not frozen together so I could not walk out and try to help it. I could reach over the frozen wave formations with my ski pole and I tried to break up the ice to help release the swan but it was too solid around its feet. I called Newport State Park and let them know. It was a really sad thing to experience. I noticed coyote tracks around what remained of the dead ducks and I imagined the fate of the swan. At least another creature was making the best of the situation.”

Cy Turnbladh sent this email:  “On (March 6) at the junction of County F and Hwy 42 there were two flocks of (Common Goldeneye) ducks circling and circling, must have been 1,000-plus animals, with what looked like nowhere to go. They are migrating North according to the sun or whatever they do and it is not spring and there is not open water. It was weird and disconcerting at the same time.”

Roy and Charlotte Lukes then forwarded a message from Scott Diehl, manager of the Wisconsin Humane Society Wildlife Rehab Center in Milwaukee:  “We have admitted numerous divers in the last several weeks. The day before yesterday, nine ducks came in. Yesterday, I believe at least a dozen ducks came in. We also got in a Red-throated Loon yesterday.

“Every one of the many birds we had admitted and cared for thus far have been significantly underweight, and some very seriously emaciated. This is not avian botulism. This is caused by a lack of sufficient food intake, almost certainly caused by extensive icing on Lake Michigan and adjacent harbors and canals.

“In addition to being underweight or emaciated, some of these birds have fractures or other injuries caused by contact with roads or from being hit by motor vehicles.

Mike Reed, director of the Bay Beach Wildlife Sanctuary, said they have taken in more than 30 Goldeneye that are starving because they can’t find food.

“These are diving ducks that need to dive under the water and dive to the bottom. They need open water to get down there, but there is so little open water, they’ve exhausted the food supply,” he said. “We’ve been getting them in regularly. Last week we got a half-dozen. With warmer temperatures, we’re really hoping it will open up and things will change.”

One of the emails we received was from a state park naturalist who said we may have broken the law by trying to help the duck, but Reed said that’s how most of the 5,000 animals Bay Beach treats annually come to them, from people who have found injured or weak animals.

“Technically, it is illegal to keep wildlife, but there is a Good Samaritan clause,” Reed said. “So if you find something injured and you are bringing it to a licensed rehabilitation facility or the DNR, then you’re covered. We really prefer that they call first so we can help give them direction on how to properly do it, for their safety and for the safety of the animal.”