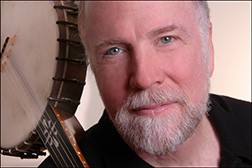 A Wisconsin native, McCutcheon has emerged as one of the country’s most popular and respected folksingers. He is a master of a dozen different traditional instruments, most notably the rare hammer dulcimer. His songwriting has been hailed by critics and singers around the globe and his 36 recordings have garnered numerous awards, including seven Grammy nominations.

McCutcheon, who last performed at the White Gull in 2011, has produced more than 20 albums of other artists, from traditional fiddlers to contemporary singer-songwriters to educational and documentary works. His books, instructional materials and workshops have introduced thousands of budding musicians to traditional American music and his commitment to grassroots political organizations has put him on the front lines of many current issues.

His apprenticeship to many of the legendary figures of Appalachian music imbedded a love of not only homemade music, but a sense of community and rootedness. The result is music, whether traditional or from his huge catalog of original songs, focused on place, family and strength. It also created a storytelling style that has been compared to Will Rogers and Garrison Keillor.

Besides his usual circuit of major concert halls and theaters, McCutcheon is equally at home in an elementary school auditorium, a festival stage, or at a farm rally. In the past few years alone he has headlined more than a dozen different festivals in North America (including repeated performances at the National Storytelling Festival), recorded an original composition for Virginia Public Television involving more than 500 musicians, toured Australia for the sixth time, toured Chile in support of a women’s health initiative, appeared in a Woody Guthrie tribute concert in New York City, gave a featured concert at the Smithsonian Folklife Festival, taught performance art skills at a North Carolina college, gave symphony pops concerts across America, served as president of the fastest-growing Local in the Musicians Union, and performed a special concert at the National Baseball Hall of Fame.

With his deep roots in American Traditional music, his approach to writing reflects both simplicity and a layered complexity that creates songs that are always more than they seem.

“He is a master at the difficult craft of the ballad,” touted the Boston Globe.

“Storytelling with the richness of fine literature,” added the Washington Post.

“One of our country’s best songwriters,” said the late Pete Seeger.

An optional pre-concert fixed price dinner will be served at 6 pm for a cost of $20.95.

The White Gull Inn folk concert series debuted in 1984 with six monthly concerts from November through April. In those days, according to White Gull Innkeeper Andy Coulson, they were called “house concerts” because they were usually held in the home of someone who provided lodging, dinner and breakfast, and took up a collection at the door for the artist.

Although not strictly a house, The White Gull had the rooms and the meals, Coulson said. Before long, the series gained popularity and began attracting artists such as Tom Paxton, Bob Gibson and John McEuen.

“It took awhile, but the artists who came the first few years liked being here in winter and spread the word,” Coulson said.

Besides McCutcheon in November, future concerts this season will feature the bluegrass band Special Consensus on Dec. 10, Jake Armerding on Jan. 21, Michael Johnson on Feb. 18, Cheryl Wheeler on March 25, and Jonathan Byrd and Sally Barris on April 15.

Tickets and more information on the concerts and the optional dinners can be obtained by calling the White Gull Inn at 920.868.3517 or toll free 800.624.1987, or visiting the inn’s website, whitegullinn.com. If still available, concert tickets can be purchased at the door, although many concerts sell out, so advance ticket purchase and reservations for the pre-concert dinners are recommended. Tickets for the 8 pm concert are $20.