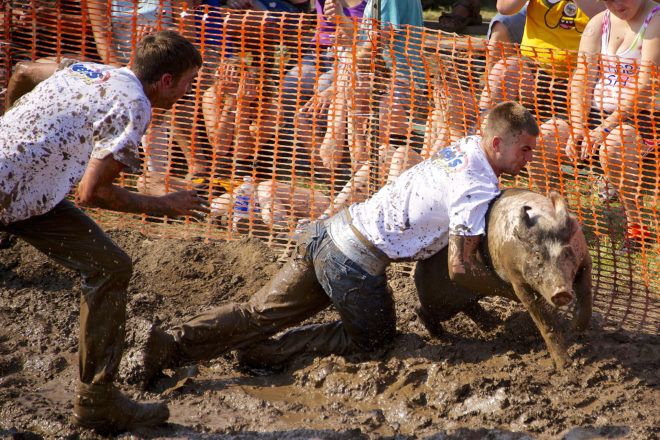 An email arrived in the Pulse inbox last week from a woman identified only as Beth. The subject line read: STOP.

Her message said this: “Your pig wrestling event must not take place. Pigs ARE sensitive, they FEEL, they are SMART. The public DOES NOT CONDONE ABUSE AND NEITHER SHOULD YOU. Please change your current plan of abuse. Thank you.”

Since the Pulse has no plans for a pig wrestling event, we had to assume Beth was referring to the pig wrestling that takes place on the last day of the Valmy Thresheree, Aug. 21. 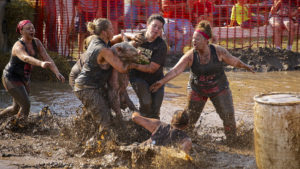 It turns out Beth and more than 50,000 other people have signed a petition on change.org to stop pig wrestling at the Thresheree. The petition was started by the Madison-based Alliance for Animals and the Environment.

“We’ve been working on pig wrestling this whole summer and looking at what events are still happening in Wisconsin,” said Sara Andrews, executive director of the Alliance for Animals and the Environment. “There has actually been a huge decrease in these events. It’s dropped from 14 a few years ago to just four or five now.”

The group began its summer campaign against pig wrestling by focusing on an annual event held at the Stoughton Fair. A petition with more than 8,000 signatures prompted a Stoughton alderman to propose a resolution that was passed unanimously to ban the pig wrestling event. The resolution included an offer of $6,000 from the city to help offset money the event raises for the fair, but there was also a motivation from the alderman who said if the organizers did not voluntarily stop the event, he would introduce an ordinance that would ban pig wrestling.

“We’d really like to see pig wrestling stopped in the whole state of Wisconsin,” Andrews said. “I think one of the biggest issues is that the [state] cruelty law is written very broadly. I think the idea of cruelty, unfortunately, is somewhat objective. What we see, as people who care deeply about animals, as cruelty, others don’t define as such. It’s kind of clear that it’s cruel, but there’s different perspectives on that. We would like to see a very clear law like the one in Minnesota that specifically bans pig wrestling [Minnesota has had a law in place since 1971 that makes contests of chasing pigs, chickens or turkeys a misdemeanor].”

On Aug. 2, the group sent a letter to Door County District Attorney Ray Pelrine, asking him to stop the event under Wisconsin statute 951.02, mistreating animals.

“I just don’t see what I understand to be pig wrestling to be something that fits the definition of cruel maltreatment,” Pelrine said. “I just don’t. To be honest, if it did, my goodness, there would be hundreds of people in every community in Door County guilty of that for what their toddler children do to their pets, or what adults even do to their pets or their neighbors’ pets.” 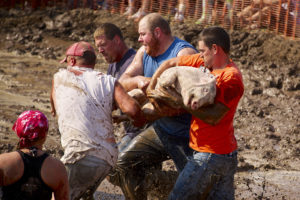 In addition to the letter, Pelrine said he has received “dozens of emails from people all over North America” asking that the event be stopped. He adds that he was not alone. He mentions an email exchange that all 72 of the state’s district attorneys are connected to in order to quickly ask questions and share information.

“Suddenly Monday afternoon (Aug. 1), numerous DAs are asking, ‘Hey, are any of you getting hit with people asking you to stop pig wrestling events in your county?’ It all happened right away,” Pelrine said.

And what does he intend to do?

“I’m going to be doing nothing,” he said. “First off, I’m an elected district attorney. I’m not a person who runs events or fairs or anything like that. It’s not my job to stop events. I just don’t do that. I also don’t prescribe conduct before it happens. For example, it used to be rather common for folks to contact my office and ask, ‘If we did this would it be legal?’ I’d have to say, no offense, I can’t be giving out legal advice, and I’m a criminal prosecutor, which means I review law enforcement investigations after things have happened. I can’t prescribe conduct for folks. So whatever conduct they’re talking about, it’s not my job to step in and say, ‘This is the DA calling. You’ve got to stop this’.”

“It’s not the first time. This happens every year,” said Ralph Bochek, organizer of the pig wrestling, about the petition. “It’s a few people, one tenth of one percent, that tries to control the rest of the world. It’s somebody who’s never been at one, somebody who’s never met us. I had one talk to me about six months ago who said dairy farmers are cruel for killing cows for their milk. That’s how uninformed they were. Most of them are really, really uninformed. They get on a bandwagon somewhere. We really do take care of our hogs.”

What does he say to those who claim pig wrestling is cruel?

“Well, we take better care of the pigs than the wrestlers. We’ve never had a pig that was hurt,” Bochek said. “And, by the way, these pigs are on the way to the slaughterhouse. We give them a week reprieve. If it wasn’t for us, they’d be in the cooler. But guess what? They’re going to be there Monday (the day after the event).”