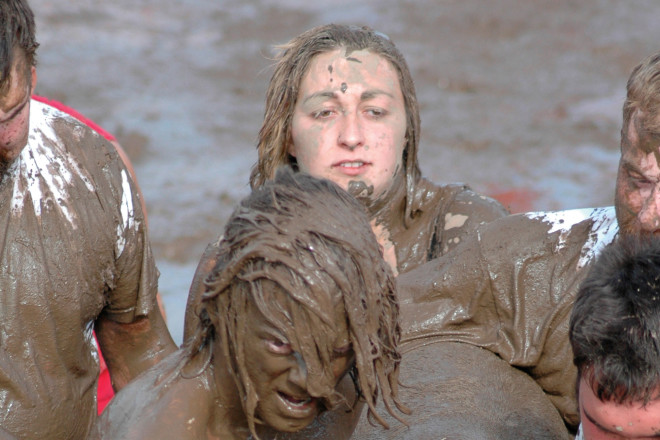 A team brings in a pig in the pig wrestling competition at the Valmy Thresheree. Photo by Dan Eggert.

Perhaps the most popular event at the Valmy Thresheree weekend is the Pig Wrestling Competition. Each year, 15 to 20 teams in men’s and women’s divisions compete in a foot or two of mud for cash prizes. Teams have come from as far away as Iowa, Southern Indiana and Milwaukee for a shot.

Teams of four have one minute to corral the pig and place it on top of a 55-gallon drum in the middle of the pit. If they don’t get it done in a minute, the pig wins.

To have a chance at the money, a team has to finish in less than 15 seconds, says Ralph Bochek, the director of the event. The record for the guys is 9.2 seconds, by a team from Dart Farms of Brussels in 2009. The Geisel girls are in the running every year, and they’ve tapped out at about 11 seconds.

Though there’s some technique involved (Bochek says it helps to have a plan for who is going to grab the pig where, and to work as a team in corralling it) it’s also a bit of a crap shoot. “Some pigs are more lively than others, and some are heavier,” Bochek says. “To some extent, success comes down to the pig your team draws.”

Each pig runs once in the men’s competition and once in the women’s. They usually come in between 180 and 240 pounds, with a 150-pound minimum, but sometimes they run a little large.

“The largest we used was 375 pounds,” Bochek says. “A team of guys couldn’t corral it, but a team of 120-pound women did it fast enough to get fourth place.”

Greg Ebel of the Greystone Castle in Sturgeon Bay has been one of the event’s biggest boosters, Bochek says, but he almost scared Ebel away before he got started.

“We brought in an 800-pound pig and told him that was his pig to wrestle,” Bochek recalls. “Ebel turned around and went running for his car.”

Folks need not worry about the pigs, Bochek says. His pig handlers pride themselves in treating the pigs better than the wrestlers.

“We don’t prod, don’t kick,” he says. “And if any of the wrestlers tries to or is cruel to the pig, they’ll be disqualified.”

Dos and Don’ts of Life in the Pig Pit

To Get in the Mud

Prizes:  Winner takes half the pot, second place gets 30 percent, and third place gets 20 percent.