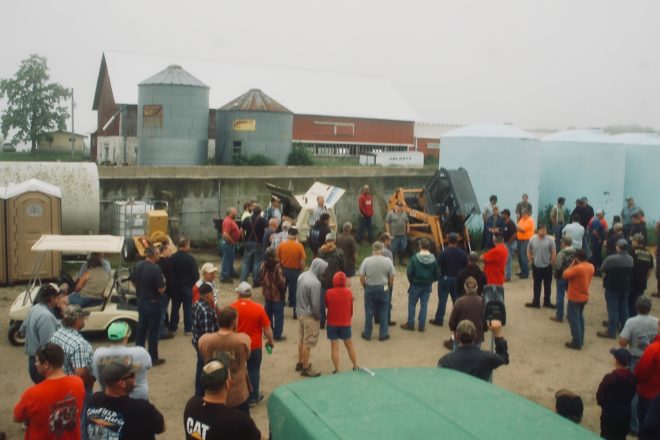 The equipment auction at the Haberli farm on a foggy June 28 brought out a crowd. Photo by Jim Lundstrom.

A farming dynasty in central Door County came to a sad end on a foggy Friday, June 28, when the Haberli family farm and its equipment was auctioned off, ending the operation that has been farming on Egg Harbor’s Memorial Road since 1948.

It comes at a time when Purdue University’s Ag Economy Barometer finds farmers across the country in an embattled mood due to torrential flooding, lowered prices, dairy surpluses and the ongoing trade war with China. The Ag Economy Barometer comprises interviews with 400 farmers. One year ago, 35 percent of respondents said they believed their equity would decline in the next year; in May 2019, that number jumped to 55 percent.

In between helping with equipment specifics at the auction, Jay Haberli said it was a combination of things – including regulations and dairy prices – that led the family to decide to end the farming operation and auction off the farm and its equipment. The stress of dealing with it all was the final straw, he said.

“Prices are too tough,” he said. “It ain’t worth the headache anymore. You can tell no one wants the farms up here anymore. After five years of winding up negative, it doesn’t pay.”

The Haberli farm is 425 acres – more than double the size it was when the late Joseph Haberli bought the original 200-acre farm from his father in 1962. The cash-crop operation at its height worked 5,100 acres, with much of that leased from 55 separate land owners.

Yoap & Yoap Auction and Real Estate of Peshtigo conducted the auction of the Haberli cattle, equipment and land.

The Haberli family was profiled in “A Life on the Farm: The Haberli Family” in the Early Spring 2012 edition of Door County Living magazine.