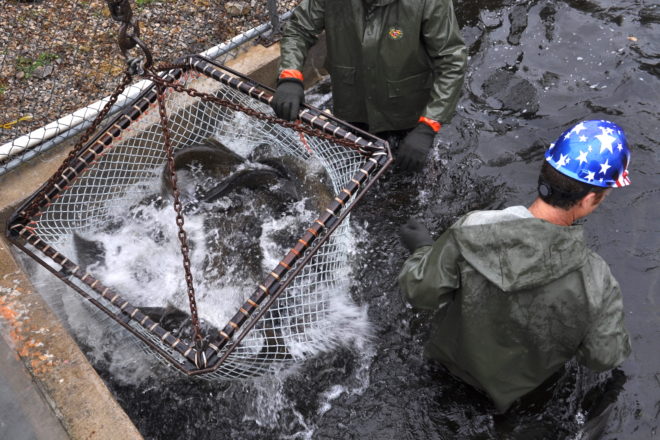 You don’t have to be an angler to get a look at a chinook in its fall colors. The DNR’s Strawberry Creek egg-collection facility will be packed with fish in late September and early October. Photo by Kevin Naze.

If you’ve been waiting for a shot at the heavyweight king of Lake Michigan, your time has come.

The next two weeks will offer the best chance at hooking up with a trophy-sized chinook salmon as the fish enter Lake Michigan tributaries or swim near shore, looking for love in all the wrong places.

Spawn-minded kings aren’t the smartest fish in the world, but they’ll make you look like a fool if you don’t have a quality reel packed with fresh, strong fishing line and heavy hooks that aren’t easily crushed.

Depending on your location, all the rain during the past week has salmon cruising nearshore areas, finning inside bays and harbors, and surging upstream on major rivers or even tributaries that are normally tiny.

Although egg-taking doesn’t normally heat up until the first of October at the DNR’s Strawberry Creek facility, there’s no stopping the kings’ instinct to head upstream to spawn – and, ultimately, die.

Chinooks aren’t the only Great Lakes trophies that spawn in the fall. Brown trout are moving in as well, and as the month wears on, coho salmon will join in on the fun.

You can sometimes tempt strikes with your favorite spoon, spinner or stickbait, but it’s hard to beat fresh or cured roe or spawn sacs drifted, floated under a bobber or suspended off the bottom with a piece of marshmallow.

Meanwhile, yellow perch action has been very good in many areas, from Dyckesville to Sturgeon Bay. Walleyes, bass, pike and even muskies are available, too, and that action can really heat up as the temperatures begin to drop later this month.

A majority of Lake Michigan anglers who attended meetings in Green Bay and Milwaukee last week told the DNR they want to see larger increases in salmon and trout stocking than what the agency is proposing for 2020 and beyond.

Angling Adventures Outdoors livestreamed both of the meetings, so you can see an archived copy of the Green Bay meeting on the Kewaunee/Door Salmon Tournament’s Facebook page.

Fisheries managers are planning to stock one million chinooks in 2020, up from an average of about 810,000 during the past seven years. In 2021, they’re proposing 1.11 million kings in option one; or 1.042 million chinooks, plus an increase in browns and rainbows, in option two. Most anglers said that if they had to choose one or the other, option two is better. However, many are saying they don’t think the increases go far enough.

Wisconsin stocked more than two million chinooks per year 11 times between 1978 and 1990. Nobody is advocating that, but many believe that in light of a huge increase in average size in recent years and far fewer salmon being caught, it’s time for a more significant increase.

Everyone has an idea of how many is enough – or too many. I’d love to see 1.3 million to 1.5 million chinooks and a half-million each of brown trout, steelhead and cohos.

The DNR is accepting comments on proposed stocking options until Sept. 30. You can email yours to [email protected]

Block ice for bucks and does

Mike Richard of Howie’s Tackle & Archery said that if you don’t have access to a walk-in cooler, you’ll want to have block ice available to expediate cooling of your deer’s carcass when the bow and crossbow seasons get under way. The long-term forecast shows high temperatures in the 70s the first week of the season, which begins Saturday, Sept. 14.

If you don’t cut your own venison, it’s a good idea to call ahead to make sure your favorite processor will be available to accept a deer carcass.

The fall wild-turkey hunt is also opening this weekend. There are still hundreds of leftover tags available for Zone 2, which includes Door and Kewaunee counties.

The group’s educational campaign is called the ABCs of Tree Stand Safety: Always remove and inspect your equipment. Buckle on your full-body harness. Connect to the tree before your feet leave the ground.

Apply for Wisconsin’s Council on Forestry

Gov. Tony Evers is accepting applications for the state’s Council on Forestry until Sept. 23. Nine seats are available. After reviewing the seats online, applicants should send a one-page letter to [email protected]. Email the council’s chair, Tom Hittle, at [email protected] if you have any questions about the council’s activities.

Fall migration is on

Many species of warblers and other colorful migrants are winging their way south, but hummingbird feeders are still seeing plenty of activity. Read the latest reports, or submit your own sightings at ebird.org/wi.