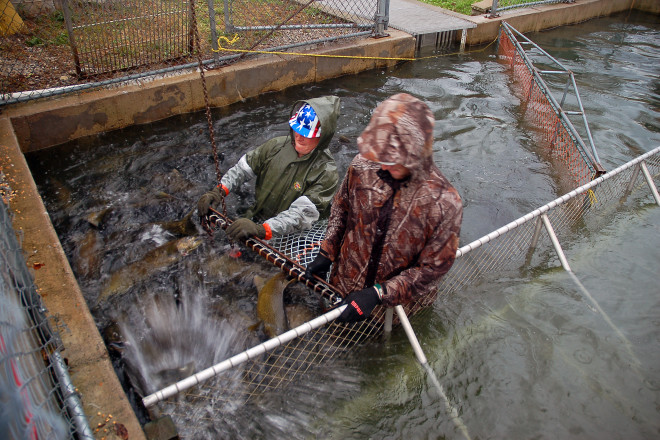 Two workers gather Chinook from the holding pond in a net.

If you want to see a sight that you are not likely to see many other places, plan to spend your morning on Monday, Oct. 19, or Thursday, Oct. 22, at the Strawberry Creek Chinook Facility in Sturgeon Bay for the fall salmon run.

There you will see an assembly line of Department of Natural Resources and U.S. Fish & Wildlife employees working alongside volunteers to collect data from Chinook salmon and harvest eggs for the 2016 stocking of Chinook in Lake Michigan.

“Our goal is to get 1½ million eggs for the hatchery in Wild Rose,” said Nick Legler, a DNR fisheries biologist, who was explaining the role of the facility to an ecology class from Sturgeon Bay High School on Monday, Oct. 12.

Legler began his tour by explaining why the DNR has a fish-stocking program, and why the agency began stocking salmon native to the Pacific Ocean – Coho and Chinook – in the lake back in the 1960s. In essence, the stocking program began because of invasive species from the Atlantic Ocean that entered the Great Lakes via the St. Lawrence Seaway, beginning with the sea lamprey, which decimated the native lake trout population, and then the explosion of Alewife without the trout to predate on them.

“Between predation by sea lamprey and overfishing, the native trout population was decimated,” he said. “Without lake trout in the system, the Alewife came in. Without a predator to control them, Alewife populations exploded. State agencies responded by stocking fish. We’ve stocked native fish like lake trout, but also non-native, Chinook, Coho, steelhead and brown trout.”

“Strawberry Creek was the first stocking location on the lake,” Legler said. “When you consider that they are native to the Pacific Ocean, this little small stream in Sturgeon Bay, probably less than half a mile before it dumps into the bay. It’s an artificial run, and maintained through stocking, but it’s one of the biggest runs in the lake.”

To help the big fish through the small stream, Legler said a diesel engine and water pump out in Sturgeon Bay supplement the tiny creek so the Chinook can make their spawning run to the collection pond, where the fish are hoisted up by a net to the processing area. First stop is a CO2 tank, where the fish are stunned, and then each fish is slid through a device with a pneumatic piston that kills them.

“They spawn once and then they die,” Legler said. “So all these fish are going to die anyway.” 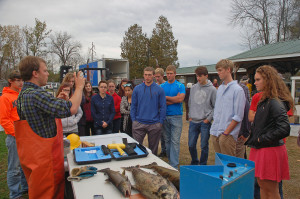 The next step has each fish sexed, weighed and measured. The female fish are hung on a hook and the body cavity is filled with compressed air to extract all the eggs.

“We’ll collect 100 percent of eggs we need for stocking right here in Strawberry Creek,” Legler said. “Our stocking quota is about 800,000 fish.”

Another area finds fish biologists from the Madison DNR office looking for abnormalities among the fish and taking tissue samples to check for viruses and ensure the health of the stocked fish.

Employees of the U.S. Fish & Wildlife Service man another table where, using metal detectors, they extract the tiny wire tag that was inserted into the young salmon’s snouts before they were stocked.

“All the fish stocked at Strawberry Creek have the same code,” Legler said. “We can look at how the fish are moving, where they were stocked, look at which stocking locations are doing best.”

Legler explained that tagging used to be done on a much smaller scale by hand, but since 2011 every Chinook has been tagged before stocking thanks to a mobile automated system that can process up to 8,000 fish an hour. The fish are dumped into tubes, sorted by size and automatically cycled into a machine that clips the adipose fin to indicate that it is a tagged fish, and then the tiny wire tag is inserted into the snout.

“There are a lot of neat things we can learn from the coded wire tag,” he said.

Once the fish have been tagged, the whole process of stocking begins again.

“We’ll stock right here in this pond about 120,000 fish,” Legler said. “The hatchery will raise the fish to fingerlings, and then we stock them into the pond. We’ll hold and feed those fish in this pond for about four to six weeks. The whole idea is to get them to imprint. When they mature as adults, they’ll be able to find their way back to spawn.”

The Chinook that were being processed on this day looked very dark. Legler explained that is because of all the stress of spawning.

“These fish are not feeding actively,” he said. “In the lake they are silver. When they come into the creek for spawning, they put all their energy into that and begin dying.”

He also noted that although 20-pound Chinook are fairly common, they haven’t been seeing many of them this year because of a lack of Alewife in Lake Michigan, which he attributed to the filter-feeding Quagga mussels hogging up all the plankton that the Alewife eat. 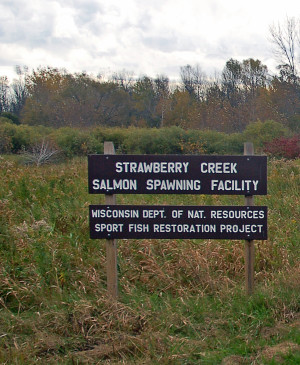 “We’ll know once we crunch all the data, but I think a 20-lb. fish will not be that common,” Legler said.

The question on everyone’s mind was what happens to the tubs of fish carcasses?

“Nothing goes to waste here,” Legler said, explaining that the Chinook carcasses are used three ways. The bulk of the carcasses are sold to Dramm, a fertilizer plant in Manitowoc where the fish are turned into organic fertilizer. Some of the smaller fish in good shape are sent to area food pantries, where fillets are distributed to users of those services, and some go to raptor rehabilitation centers.

They also collect way more eggs than they need, so the extra eggs are sold to Atlas-Mike’s Bait of Fort Atkinson, where they are turned into fishing bait.

To visit the Strawberry Creek Chinook Facility, take County U off of Hwy. 42-57 for about one mile, then turn left on Strawberry Lane, where you go for about another mile. The facility is on the right side.