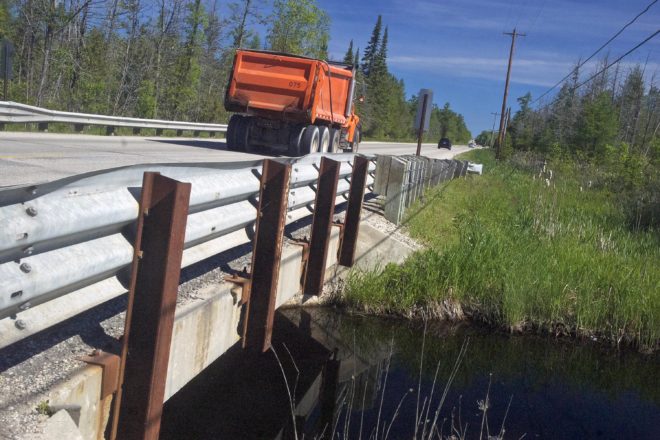 A county truck passes over Mudd Creek. The replacement of this bridge will cause a detour on County Q in the fall. Photo by Jim Lundstrom.

It was déjà vu all over again Tuesday evening when representatives of the Wisconsin Department of Transportation explained plans to begin the resurface of Hwy. 57 from the southern intersection of County Q to Sister Bay.

The very same meeting was held on Feb. 27, 2014, when the DOT explained that the project would begin August 2016 and be finished in November of last year (doorcountypulse.com/highway-57-resurfacing-plans-detailed). 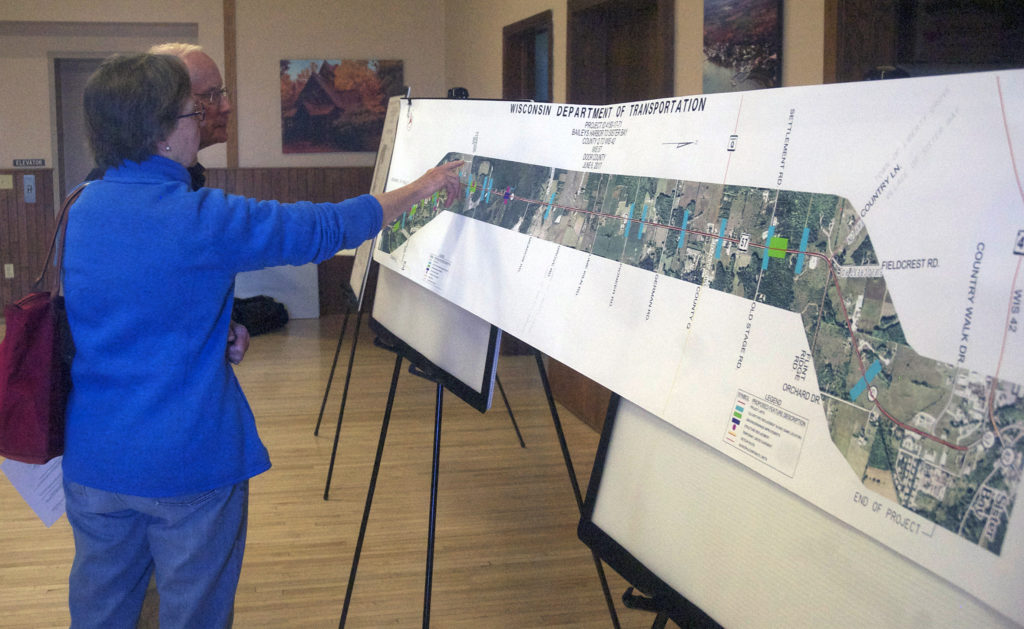 Bill and Kathy Wolff look at the map of the Hwy. 57 project during the public meeting on June 6 at the Baileys Harbor Town Hall. Another meeting with the contractor will be held in August. The project is scheduled to begin after Labor Day. Photo by Jim Lundstrom.

Obviously, that did not happen. Priorities shifted. Now this northernmost section of Hwy. 57 is back on the DOT radar, explained Project Manager Jeremy Ashauer to about 30 people at the Baileys Harbor Town Hall for the presentation on June 6.

Same project. Same plan, with a couple of differences. Now the project will not start until after Labor Day (on or after Sept. 5).

Ashauer said another meeting will be held in August with the contractor for more specific dates on the project, but he said the main effort in the fall will be to replace the bridge over Mudd Creek, which will require about a six-week re-route of traffic on County Q. That work will be completed the weekend before Fall Fest (Oct. 13-15), Ashauer said. He added that the bridge work had to be done in the fall in order not to disturb the spring spawning season, and summer is entirely out of the question for the closure of Hwy. 57.

The actual highway resurface will not take place until the spring of 2018. Ashauer said the project will be completed by the end of June 2018. The resurface will remove two inches of asphalt and replace it with four inches of new surface.

Ashauer left project renderings at the town hall for anyone to see. The DOT has also created a project website at projects.511wi.gov/wis57. Business owners along the corridor are advised to use the “In This Together” website to assist in planning for road closure signage and marketing, wisconsindot.gov/Pages/projects/in-together/default.