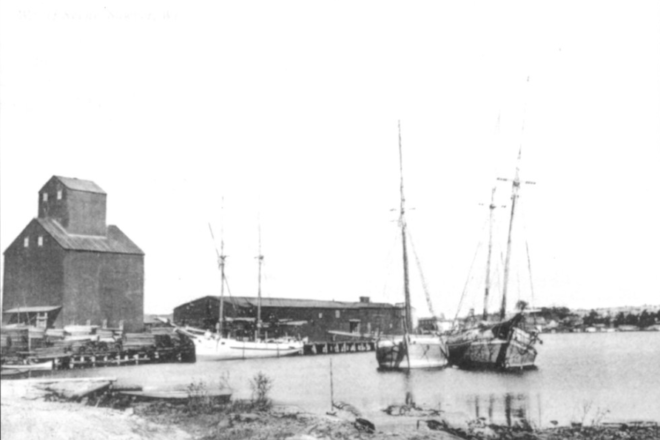 The Teweles and Brandeis Grain Elevator as it looked in the early 1900s, before it was wrapped in metal sheeting and surrounding waters were filled. Image courtesy of the Door County Historical Museum.

The Sturgeon Bay Historical Society introduced the principal project leaders for the restoration of the Teweles and Brandeis grain elevator March 9.

Sturgeon Bay engineer Mike Till will lead the project onsite. James Dallman of the Milwaukee firm La Dallman is the chief architect, and Sturgeon Bay native Jeff Beane of Silman is the project’s structural engineer. If the city and historical society are able to hammer out details on an agreement, the building could be moved back to the west side by late fall of this year.

“We’re contributing a historic building and hoping the city is inspired to add to this in the future,” she said.

The building will not be conditioned for year-round use, but it will be clean and structurally sound and will feature a first-floor gathering space and new windows and doors. It will not include heating, air conditioning or restrooms. Fairchild said it doesn’t make sense to take up space in the building for restrooms or the duct work required for heating and cooling, but those facilities could be included later in an attached addition.

“We’re committed to making this the most useful space we can with the dollars we have,” Fairchild said.

An anonymous donor’s $1.25 million gift will fund the move and initial restoration. If funds remain after the restoration is complete, they could be used to pay for additional upgrades.

James Dallman presented concepts for the renovation and surrounding grounds. The structure will retain the vertical grain bins, which visitors will be able to view from the first floor. He suggested including a winding staircase and elevator so visitors could ascend to the top of the granary to take in views of the city and waterfront. That would likely require additional fundraising, but Weber said she’s confident the project will not use taxpayer dollars for future phases beyond restoration.

“I don’t believe the city will have to pay for anything,” she said, adding that she has identified 10 state and federal grants the city could apply for beyond additional private donations.

Beane presented a long list of major projects he has worked on in New York City, including the Domino Sugar Refinery and much-lauded High Line urban park project. He toured the granary in the summer of 2018, and he said that contrary to perception, it is in “really good condition.”

“The exterior is weathered wood, not bad wood,” Beane said, though some sections have significant deterioration that will need to be restored.  “This could be the center of a new public space to celebrate the Great Lakes in Sturgeon Bay.”

Dalman said there may be flexibility to make some changes to the building – such as entryways and windows – that would still allow it to maintain its historic designation. “You can create a protocol where every change is new, but respectful,” he said.

One of the biggest questions in the process, Dallman said, is figuring out which era of the granary’s past should be pinpointed as the basis for restoration. That determines whether the outside retains a wooden exterior or is clad in metal sheeting.

Before the introduction of the project team, historian George Evenson gave context about the importance of the granary to the city’s past. Evenson, who celebrated his 90th birthday after the event, said Sturgeon Bay was a farm town long before shipbuilding and tourism arrived, and he called the granary a valuable representation of that history.

“In Sturgeon Bay there were food-processing plants, grain elevators, six implement dealers, harness stores,” he said. “Changes demand that we restore something to memorialize it.”