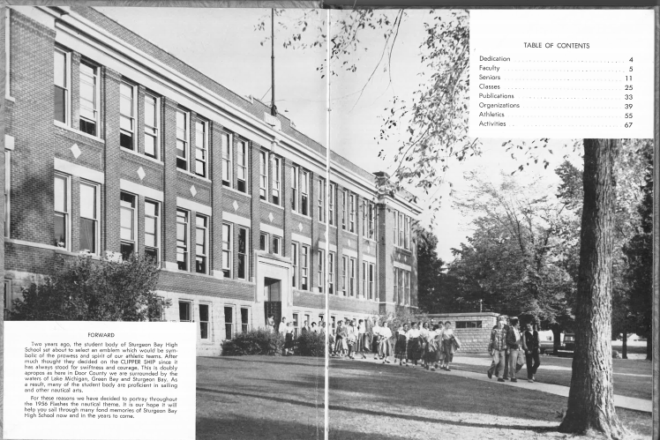 The new nickname for Sturgeon Bay’s sports teams didn’t immediately have a firm grip on fans, but The class of ‘56 tried to put the matter to rest in the forward to the 1956 High School Yearbook.

During the first half of the last century, the name of Sturgeon Bay High School’s (SBHS) athletic teams and a moniker for many of the school’s groups and clubs was the Bays.

Neighboring schools touted more intimidating mascots. There were Wolves, Indians and Chiefs. There were Phantoms, Vikings, Pioneers and various Devils. But Sturgeon Bay – home to two radio stations, a semiweekly newspaper and the county seat – could only come up with Bays?

By the early ’50s, times were a-changing, and people wanted something more in a nickname. A demand to create a new and respected school team name bubbled to the surface in the fall of 1953. Some of the impetus came with the hire of Orland Radke as the new SBHS principal. He was young – not yet 30 years old – and innovative. He had served as a “frog man” during WWII and as a Golden Gloves teacher and boxer.

As best remembered, the search for a fitting mascot name began during an all-school assembly just after football season had ended or near the beginning of the basketball season, when each of the four high school classes was charged with recommending a new school mascot.

Each class had three faculty advisers who were to advise and steer the students during the selection process. Each class met and made a choice that an adviser then carried forth to the selection committee, which comprised an adviser representing each of the four classes, Principal Radke and Horace Freiman, who was a logical choice because of the various positions he held. He was the head track coach, the boys’ physical education teacher and the equivalent of today’s athletic director.

Within a week or so, a choice was announced.

The new name? The Clippers.

Immediately there was some confusion and disappointment among some students and fans. Where was the menacing animal or fear-inducing person?

The “Clippers” name had come from the Class of 1956, and at least four of the six faculty members had signed on to it. There was some stiff resistance, however – first advocated by Freiman, who put forth a strong and somewhat convincing argument against the name “Clippers.”

In addition to his other roles, Freiman was the public-address announcer for all home football games and explained that the term “clipping” describes a negative action on the football field that results in a major penalty for the offending team. Behind the scenes, during a heated moment, he supposedly said something along the lines of, “Who will force me to announce 15 yards due to clipping on the Clippers?” Freiman, especially in his role as athletic director, was not going to succumb easily to what he believed was a derogatory mascot name.

It should be noted that there was at that time – as well as for several years before and after that time – an east-side-versus-west-side rivalry in Sturgeon Bay. Freiman, two school board members, Radke and Mr. Keller, who was the superintendent of schools, all lived on the west side within seven blocks of each other. At the time, we teenagers had only scant awareness of the behind-the-scenes conversations and power brokering over the students’ choice for the name “Clippers” – a choice that likely evoked stronger feelings among recent SBHS graduates.

In early 1954, the following incident likely sealed the deal. East, West, Corpus Christi and Saint Joe’s played their grade-school basketball games on Saturdays in the high school gym. Those games generally ended in the early afternoon. When personnel reported to the high school on a Monday morning, a new painting on the center jump circle in the gymnasium greeted them: an amateurish, but genuine painting of a clipper ship.

That painting filled at least half of the center jump circle. No words were needed to explain it. Many viewed and accepted it as the final stamp of approval for the “Clippers” name, and to my knowledge, a request to credit (or blame) the responsible party or parties was never made. Within several weeks, a more professional and elaborate rendition of a clipper ship appeared in its place.

The first media recognition this writer has found for the use of “Clippers” was printed in the main sports page of the Feb. 16, 1954, edition of the Door County Advocate. In that article, the “Clippers” name appeared twice, and the term “Bays” appeared several times. During the next 12 to 18 months, both terms were used, as though writers and fans were waging internal and external struggles over the names, but slowly, the “Bays” name declined in usage.

Fred Peterson, founder of Peterson Builders, Inc., donated warm-up uniforms featuring a line drawing of his boat, the Utopia. In an effort to appease the opposition and smooth the transition, media outlets were urged to use the term “Bay Clippers.” That seemed acceptable to many media outlets in northeastern Wisconsin – at least for the short term.

In 1956, the Sturgeon Bay High School annual, Flashes, swung a final blow in its foreword.

“Two years ago, the student body of Sturgeon Bay High School set about to select an emblem which would be symbolic of the prowess and spirit of our athletic teams. After much thought they decided on the CLIPPER SHIP since it has always stood for swiftness and courage. This is doubly apropos as here in Door County we are surrounded by the waters of Lake Michigan, Green Bay and Sturgeon Bay. As a result, many of the student body are proficient in sailing and other nautical arts.

For these reasons we have decided to portray throughout the 1956 Flashes the nautical theme. It is our hope it will help you sail through many fond memories of Sturgeon Bay High School now and in the years to come.”

During the 50th reunion of the Class of 1956, we discussed the Bays-versus-Clippers issue and recognized that one of our female classmates was the student who was responsible for advocating the name “Clippers.” We also accepted that, in hindsight, she was more global and forward-thinking about the city and region than many of us who simply desired a fierce and foreboding symbol.

Through a democratic procedure, SBHS students proposed the mascot name that was accepted by the faculty and, eventually, accepted by the community. In the end, the Clippers beat the Bays.

Jerry Grassel is a 1956 graduate of Sturgeon Bay High School.