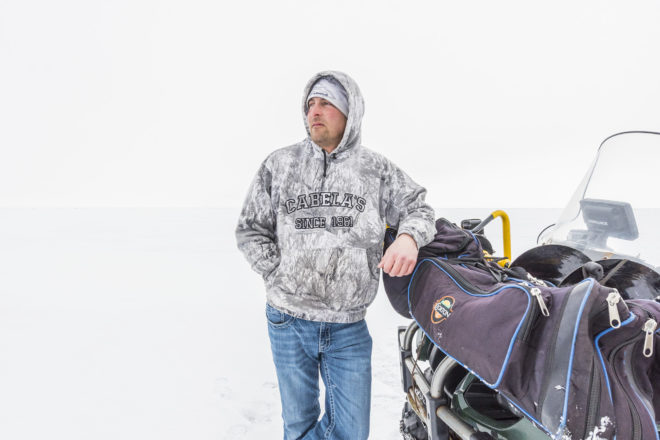 On a bitterly cold morning last February, I strolled onto the ice off Frank E. Murphy Park in Egg Harbor to check out a couple of ice shanties that were about a quarter-mile offshore. I was hoping to find someone inside the shanties for a story we have been talking about doing for this publication for the past couple of years on the shanty culture.

But no one was home.

I wrote a note and left a business card on one of the shanties, asking the owner to call me, and then I headed back to land. I was just about to get into my car when a guy came rolling off the ice on a four-wheeler and pulled up to the only other vehicle in the parking lot, a large pickup truck.

Thinking he might be associated with one of the shanties, I walked up to him and introduced myself. Turns out I was about to meet one of the most enthusiastic ice fishermen on the planet.

“I’m out there probably five, six days a week. I can’t sit in the house,” he said, explaining that he works a landscaping job that gives him winters off. “Nothing beats ice fishing. You’re in a controlled environment. There’s no waves.”

His name is Joe Koors, and besides being a dedicated angler, he is a genuinely friendly guy. Before our brief parking lot conversation was finished, Joe had invited me and photographer Len Villano to meet him in a few days to visit his shanty.

On the appointed day, Len and I met Joe in the parking lot at Frank E. Murphy Park and, somehow, we all piled onto Joe’s ATV for the long drive out to his lone ice shanty.

“I’m the furthest-most shack fishing offshore in Door County. I’m kind of the local guy out by himself trying to stay away from people. It’s nice just having the space to yourself,” Koors said. “I take pride in being the guy where no one else is going. I love it.”

Does he ever worry about being so far out on the ice?

“You really just have to check the ice conditions. I don’t like to come out this far offshore unless it’s 10 inches or more. The ice now is about 13 inches. We’re all about safety. You want to come home every night. When you’re fishing this far out, you have to watch the weather because it can change any day. The southeast winds are the worst.”

Koor’s shanty is a sleek aluminum-clad home on the ice that saw its first season in 2010. Before that he had a 30-year-old shanty that his father had built when he was a child.

“It was just all rotten and kind of had its time, so we decided to make a new one,” Koors said. “We’ve got about 1,800 bucks into it. If you had to pay somebody to build it, it would probably be twice that. It took a little bit of work to build this. We wanted to make sure it was solid because these things take abuse over the years. Big time.”

Koors gives his dad credit for getting him interested in ice fishing as a kid, but he has taken it to another level by getting to know the lake and trying to understand whitefish.

“I’ve spent many years in figuring these whitefish out. There is a lot of science involved,” he said. “I look on my underwater maps. Our phones have them now. You look for rock points. Right beyond this, its 100 feet of water, where the shallow meets the deepest water. Here it’s a real fast drop, almost like a cliff underwater. The whitefish hold to that. They really like that. They’re digging around for those gobies. So you look for that shallow water adjacent to the deep water. I take a jig like this and bounce it on the rocks on the bottom. It’s imitating the goby. That’s what brought these whitefish in. You jig in the rocks, and the whitefish are just mouthing around down there looking for gobies to eat. And there are plenty of them out here on these reefs.”

Koors said the 2015-16 winter was perfect for ice fishing.

“It hasn’t been this nice in a few years. Nice and flat,” he said. “Sometimes it’s just a nightmare out here. It can take as long as two hours just to reach the place safely.”

The flat ice also makes for easy transport of the shanty if Koors feels the need to move.

“I kind of move away from people,” he said. “Sometimes it depends on the fishing. Sometimes the fishing’s good but I’ll just move for the scenery.”

Koors said while he does not mind fishing alone, a typical day usually includes a fishing buddy.

“Sometimes we drink beer. Sometimes not,” he said. “We get music going. We cook food and hang out. Shoot the breeze with the guys. Different friends will come out. We were out here Friday. It was just one whitefish after the other. Absolutely incredible.”