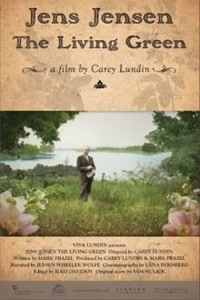 The Clearing Folk School and Door Community Auditorium are partnering to present the 2014 award-winning documentary film Jens Jensen The Living Green on Jan. 30 at 7 pm at the Door Community Auditorium in Fish Creek. Six years in the making, the film follows the career of Jens Jensen, noted Danish-born landscape architect, conservationist and founder of The Clearing Folk School in Ellison Bay in 1935 at the age of 75. Many consider Jensen to be the most important American landscape architect and The Clearing his “great work.”

The 55-minute documentary, narrated by Jensen’s great-granddaughter, Jensen Wheeler Wolfe, follows the life of Jensen as an advocate for the preservation of lands and sensitive ecosystems for future generations, including the design of Chicago’s Humboldt, Garfield and Columbus Parks as well as the prairie style of landscape design he became known for as he created the grounds surrounding the mansions of the Armours, Florsheims and Fords. Immediately after the film, a question and answer period with current Executive Director of The Clearing, Mike Schneider, will take place.