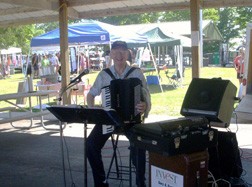 The Jacksonport Farmer’s Market will feature the music of Jerry Voelker on July 17. Voelker, well known musician and bandleader, will play for the crowd from 10 – 11 am. Jerry and Rosie Voelker reside on Clark Lake and Voelker volunteered to play on July 17 and August 14.

Voelker was recently presented with a Lifetime Achievement Award in Milwaukee with the Wisconsin Polka Hall of Fame. Jerry Voelker and The Jolly Gents have toured many states and have even played internationally; he will continue his touring next year in Europe.

Voelker has been on WTAQ Radio in Green Bay for 44 years and has a wide audience who love his music. He also has 18 CDs, which will be for sale at the market.

The market is held every Tuesday from 9 am – 1 pm at Lakeside Park through October, weather permitting.