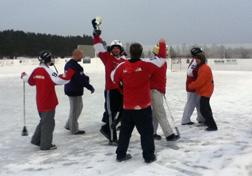 The oldest team in the Northern Door Broomball League outlasted all the rest to take home the Hilander Cup Feb. 20 at the Teresa K. Hilander (TKH) Community Ice Rink.

JJ’s LaPuerta, a league member since its founding, defeated the Sister Bay Bowl in the championship game for its first ever title. TKH workers scrambled to lay down ice for the tournament after the final week of play was canceled due to a mid-February warm spell. A thin layer of ice provided solid conditions through the semifinal matchup, in which JJ’s recovered from a 2 – 0 halftime deficit to knock off an injury and vacation-decimated Pulse squad 4 – 2. In the other semifinal, the Sister Bay Bowl prevailed in a shootout to beat a much younger Husby’s squad.

But just in time for the championship, the snow arrived. Midway through the first half drifts of snow formed along the boards on all sides of the rink, slowing play and whipping snow into the faces of competitors. JJ’s proved a little fresher in the title game, jumping out to a 1 – 0 lead, gaining inspiration from the Willis Reed-like comeback of veteran broomballer Tim Iding, who was sidelined by foot surgery just a month earlier.

As the final seconds ticked down, a scene akin to the confetti pouring down on the Packers in Super Bowl 45 erupted on the ice (well, maybe not so much like the Super Bowl. More like a half dozen semi-athletic guys whooping and throwing helmets around the ice).

Finally, JJ’s had the Hilander Cup.