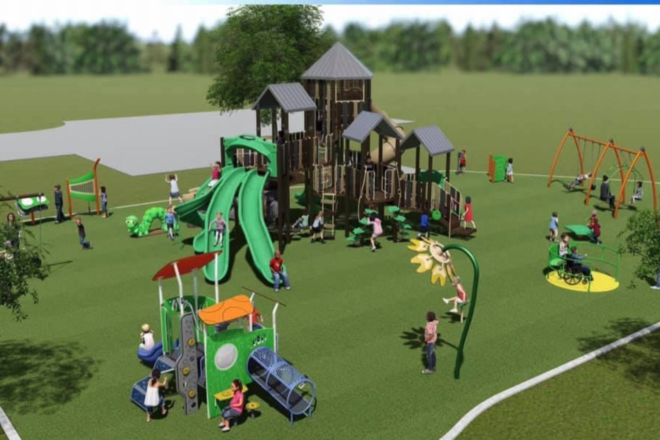 A rendering of the proposed improvements to the Kendall Park Playground in Baileys Harbor.

Sandy Weisgerber said her daughter, Kendall, had always wished she had a park with a swing set to play on. When Kendall drowned in 1991 at the age of 6 in the water off the town’s marina, the Weisgerber family knew they had to make Kendall’s wish come true for other children in Baileys Harbor.

The Kendall Marie Weisgerber Memorial Playground, constructed in 1992 next to the Baileys Harbor Town Hall on County F, has become a landmark for multiple generations of Baileys Harbor children and their families, said Kari Baumann, Kendall’s older sister.

“We have so many people come up to us, and they’re like, ‘My grandkids played in that park, and now my great-grandkids are playing in the park,’” Baumann said.

Weisgerber recalled that creating the memorial playground took $15,000 in donated funds from friends, family members and community members, as well as approval from the town board. When her idea was approved and a location was chosen, she gathered local children and gave them pamphlets of park equipment to choose from.

“Six or seven little kids, all the kids in town sitting there, had come up sure that they wanted the big slide put into that park,” Weisgerber said.

The Future of the Park

The group formed a year ago when planning began for major improvements to the now-30-year-old park. That’s also when fundraising officially began for the Kendall Marie Weisgerber Memorial Playground 30th Anniversary Revitalization Project.

“It’s been a little bit more of an eye opening, the longer and longer that we go and see how outdated it really is,” Ryan Weisgerber said.

The project’s aim is to make the park more enjoyable for toddlers and more accessible for children with disabilities. To this end, the improved park will feature a separate area with equipment designed for younger children, ADA-compliant equipment, and a flat turf instead of wood chips. It will also feature a larger nucleus with slides and a climbing area.

The project’s fundraising goal is $500,000. The Ridges Sanctuary, the Wisconsin Public Services Foundation and the Door County Library Association have all made donations, as have area businesses. Premier Concrete has donated the concrete that will be necessary for the project, and Baileys 57 BP hosted a fundraiser, donating $.08 – up to $10,000 – for every gallon of gas sold. A campaign through which individuals and organizations could sponsor a brick to be placed at the new park concluded June 1.

Through such efforts, nearly $285,000 has been raised, Baumann said.

“We are able to purchase about three-quarters of the equipment that we need that we would like to see at the park,” she said. “But we’d like to get one more fundraising push to get the rest of the pieces of equipment purchased.”

The park will be constructed in phases, with the first phase creating the nucleus of the playground and placing ADA-compliant equipment. Workers will break ground this September.

Now with children of their own, Ryan Weisgerber and Kari Baumann understand the importance of having a free, accessible public space where their children can play.

“I just love to go there and to hear the kids laughing and to see Kendall’s spirit live on within those kids,” Baumann said. “I think we’re just going to be able to accommodate that more now.”

To donate to the Kendall Park Playground, call the community association at 920.839.2366. Its mailing address is P.O. Box 31, Baileys Harbor, WI 54202. The Baileys Harbor Community Association will match up to $7,500 of donations that come in now.