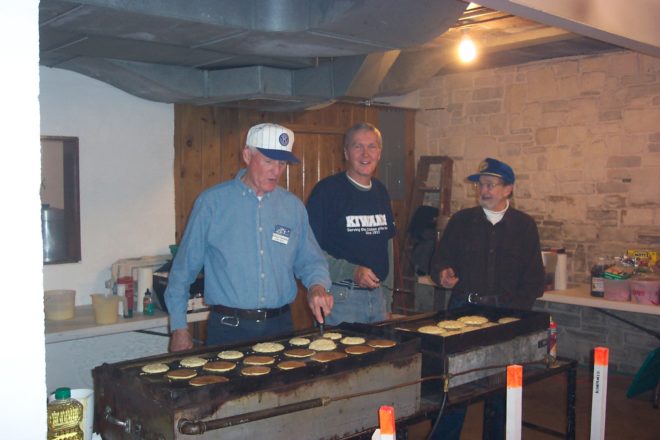 When French diplomat Alexis de Tocqueville made a nine-month tour of America in 1831, he marveled at the robust civic organizations he found doing much good work here.

As he wrote in his resulting book, Democracy in America, “Americans use associations to give fêtes, to found seminaries, to build inns, to raise churches, to distribute books, to send missionaries to the antipodes; in this manner they create hospitals, prisons, schools. Finally, if it is a question of bringing to light a truth or developing a sentiment with the support of a great example, they associate.”

But society has changed, and service organizations throughout the country are in decline. In fact, Door County has one fewer organization since the Kiwanis Club of Northern Door held its final meeting on Jan. 15, at which the members voted to disband the 49-year-old organization.

“I joined the club about 12 years ago when we moved up here. We had at that time 35, pushing 40 members. Now we’ve fallen down to 14 guys,” said John Skogsbakken, who has served as president and secretary of the organization. “Five of the 14 are in their 90s, four in their 80s. We were not really recruiting new people. It was hard to get the guys to come out. Maybe four of the 14 are snowbirds. Some of the guys can’t go out at night and are afraid to go out when it’s slippery out. We had real manpower issues.”

That included taking leadership of the organization.

“As these guys get older, nobody wants to take responsibility for leadership positions,” he said. “I’m the secretary now. I was the president previously for a couple of years. Our treasurer goes to Florida in the winter, so I’m doing a lot of treasurer and secretary work. I kind of got myself into a situation where I was doing 90 percent of the administration work. We’ve been thinking about it on and off the last few years. So I kind of steered the conversation and had some offline talks with some of the older members that maybe it’s time.”

The local chapter of this international service organization, whose motto is “Serving the children of the world,” was chartered in May of 1970.

“Kiwanis has had a strong and visible presence in Door County all these years, with its many fundraising and service projects,” Skogsbakken said. “Even with dwindling membership, nearly $13,000 was donated to local youth organizations and activities in the last two years alone. Much of this money went to college scholarships for Gibraltar High School graduates. A variety of community charities have also been supported.”

The Kiwanis had a presence at Marina Fest. The Fall Fest pancake breakfast was a fixture for many years. The winter Travelogue film-series fundraiser was discontinued several years ago. Members also volunteered for the Liberty Grove Historical Society Tractor Show and as bell ringers for the annual Salvation Army red-kettle campaign.

“We will continue to do some of the things as individuals that we were doing before,” Skogsbakken said. “Some of us will participate in the tractor show and ring the bell for the Salvation Army. We’re still a bunch of guys that may hang out together. What they suggest you do when you disband is point guys in other directions.”

Skogsbakken said they did talk with the Sturgeon Bay Kiwanis Club about a possible merger.

“They’re in the same boat as we are in some ways,” he said. “Kiwanis International have people who will come and try to do membership and development. Up here, I thought that would probably be fruitless. I saw absolutely no way there was any future in this. It just dried up for us. I don’t know how else to say it.”

Skogsbakken had one last thought to share:  “Thanks to all members past and present, and to all in the community who supported Kiwanis all these years.”