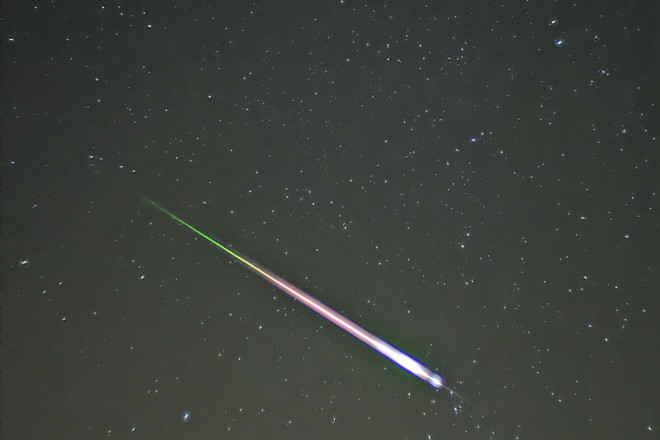 Actually, he originally put all of Russia on “summer time,” but that proved to be a disaster because, according to the BBC, “summer time created stress and health problems, especially for people in northern Russia where the mornings would remain darker for longer during the harsh winter months. [They cited] reports of increased morning road accidents in 2012 compared to previous years, and blamed them firmly on the 2011 time change.” So he reversed his decision. Big of him.

We still have Daylight Savings Time here in the U.S. until Sunday, Nov. 1 when we “fall back.” So throughout each spring and summer, Door County astronomers, amateur astronomers, and all lovers of dark skies must wait until the middle of the night to see the exquisite beauty of the stars. But soon, it will be dark before bedtime and because of decreasing day length, will still be quite dark when most of us wake up.

And that is good for sky watchers because from about Nov. 6 until the end of the month, the Earth will pass through the debris trail of comet Tempel-Tuttle. Consequently, we will experience the Leonid Meteor Shower. That means that throughout the month, anyone looking up into the night sky has a good chance of seeing a meteor or two. The peak this year will occur the night of Nov. 17 and the morning of the 18th.

Back in 2002, members of Door Peninsula Astronomical Society (DPAS) gathered on Crossroads’ Observatory Hill to watch the Leonids and we invited Jodi Brey, who at that time was the Outreach Director of the Peninsula School of Art. It was a magical night; crisp, perfectly clear, and we had an unusually good meteor show. It was so cool! Well, in reality, it was bone chilling, painfully cold, especially if one sat on the ground, as Jodi did.

Later that night, as she was thawing, Jodi came up with the idea of creating a sculpture on which people could sit while stargazing or meteor watching. She wrote a proposal to the National Endowment for the Arts and received a $10,000 grant to hire artist Jean Humke who, in collaboration with DPAS, astronomy students from Sturgeon Bay School District, and Peninsula School of Art, created our StarGarden.

Since that time, the Crossroads Astronomy Campus has become an “art park” where one can learn about science, or an astronomy center with a growing number of art installations.

Those interested in astronomy are invited to attend the monthly meeting of the Door Peninsula Astronomical Society at 7 pm on Nov. 3. The feature lecture, offered by Dr. John Beck, will be an update on New Horizons, the NASA mission that “is helping us understand worlds at the edge of our solar system by making the first reconnaissance of the dwarf planet Pluto and by venturing deeper into the distant, mysterious Kuiper Belt – a relic of solar system formation.” Refreshments and fellowship are a part of the DPAS tradition.

Then if skies are clear on Nov. 14 from 7:30 pm on, members of DPAS invite the community to join them for a Viewing Night at the StarGarden. There may be a few meteors and for sure, some stunning views of the circumpolar constellations. Both events will be at the Crossroads Astronomy Campus, 2200 Utah St. in Sturgeon Bay.