The Answer Was ‘Yes!’ 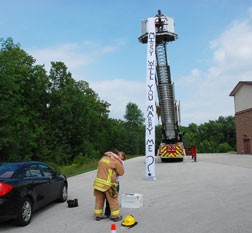 Ephraim Fireman Tim Penchoff surprised Missy Siebold with a 50-foot banner asking her to marry him. The banner was attached to a fire truck and raised as Missy drove into the fire station. Photo by Tad Dukehart.

Arrangements are pending for a Celebration of Life and will be made available when all the plans are complete. Caspersonfuneralhome.com.

Dr. James M. Sargent, 79, of Fish Creek, formerly of Appleton, died Aug. 25, 2014, surrounded by family at his home. Jim is survived by his wife, Madeleine, four children and their families.

A memorial mass will be celebrated at 11 am Sept. 5, 2014 at Stella Maris-Fish Creek site with Fr. Art Heinze officiating. Military Honors will follow at the church. Burial will be at Blossomburg Cemetery in Peninsula State Park. Friends may call at the church from 9:30 am until the time of service.

Wayne Joseph Rupiper, 68, of Washington Island, died on Aug. 24 in Green Bay. He was born in Green Bay and in 1971 he moved his family to Washington Island and became the rural letter carrier and eventually postmaster until he retired in 1992. He remained on the island until his illness made that impossible. A memorial service will be held at Trinity Lutheran Church, Washington Island, at 11 am on Saturday, Aug. 30. In lieu of flowers, the family requests memorials go to the WICHP Ferry Fund. Casperson Funeral Home is assisting the family.

Arrangements are being made with the Woodlawn Funeral Home in Forest Park, Ill., for Joan B. Shannon, who died Aug. 23, 2014. Casperson Funeral Home, Sister Bay, is handling arrangements locally. Caspersonfuneralhome.com.

JoAnn DeGrave, 75, of Sturgeon Bay died at Golden Living Center, Dorchester on Aug. 22, 2014. She was born Oct. 22, 1938, in Door County to William and Alvina (Rohan) Ploor. On Feb. 17, 1962, she married Clifford DeGrave in Institute; he preceded her in death on June 28, 1974. JoAnn worked for many years at the Fawn Restaurant and later for Econo-Foods. Funeral services were held Aug. 27, 2014, at Forbes Funeral Home, Sturgeon Bay. Burial will be in Schumacher Cemetery. 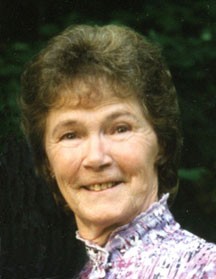 Jeanette “Jan” Meyer, 82, of Sturgeon Bay, died at home on Aug. 20, 2014. She was born on Oct. 19, 1931, in Sturgeon Bay to Harold and Leona (Copiskey) Fairchild. On September 17, 1949, she married Vernon R. Meyer at St. Paul Lutheran Church in Juddville. Jeanette loved being outside, working in her gardens, and fishing. Services were held Aug. 26 at the Forbes Funeral Home, Sturgeon Bay. Memorials may be given to Unity Hospice in her honor. Online condolences may be offered at forbesfuneralhome.com. 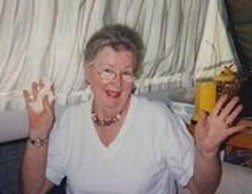 Joanne Joyce Roberts died May 16, 2014, at Southeast Georgia Health System hospital in Brunswick, GA, after a fall at home. She was the wife of James M. Roberts. She and James built a home on St. Simons Island and continued to spend summers at a second home in Sturgeon Bay. A service will be held at 10 am, Tuesday, Sept. 9, 2014, at the chapel at Bay Side Cemetery in Sturgeon Bay. Burial will follow in the cemetery. Huehns Funeral Home, Sturgeon Bay is assisting with burial service arrangements.