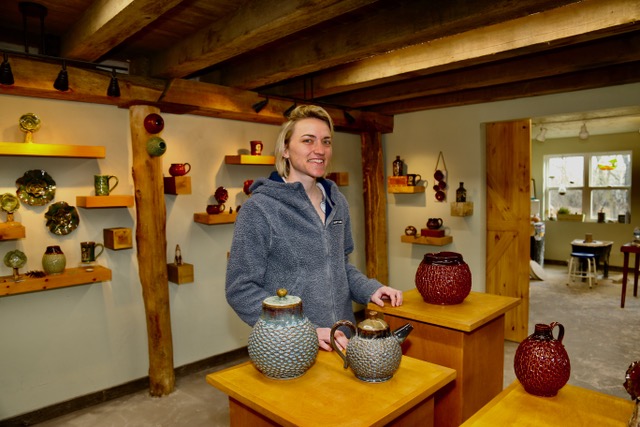 Liz Butler inside her new gallery. Photo by Tom Groenfeldt.

Liz Butler Pottery occupies the Door County version of a White Cube gallery: modern, white walls; polished concrete floor; sleek displays of her work paired with big, exposed beams; and sliding barn doors to separate her working tables and wheel from the display space. A partial wall sets off her kilns at the other end of the gallery. Shelves and pedestals display her mugs, vases, trays, pitchers and flower-shaped incense burners at the gallery, which occupies a third of the barn next to her home just north of Sturgeon Bay.

Butler moved to Door County in eighth grade with her mother, Dr. Karen Butler, and attended Southern Door School. At Loyola University in Chicago, she studied history with a minor in ceramics. When she returned to Door County, she apprenticed with Chad Luberger, the porcelain potter at Plum Bottom Gallery in Egg Harbor, then worked for him. There she learned about the chemistry of glazes and the importance of the feel of a mug’s rim on the drinker’s lips.

In 2015, Butler owned Kick Coffee, where she had worked previously and hung her art on its walls. After selling it in 2018, she and her husband, Ryan Gilbert, moved from town to their current home near his family’s impressive dairy farm on County T, and she moved her pottery operation from the basement – which she said felt like a dungeon – to the bright, cheerful barn studio and gallery.

Nature frequently makes its way into the drawing and carving that Butler does on her mugs, which pairs nicely with the modern aesthetic of her studio. She incorporates a crescent moon hanging over a fox, owls, ducks, nestled cats and snails, as well as other playful designs.

Butler works in distinctive styles, plural, because she’s not content to stay with a single design.

“I do have a tendency to kind of hop from this idea to that idea,” Butler said. “I think that is something people really like about my work – that it is always changing, it is always evolving. It stays somewhat constant in the sense of the textures and the colors, but it’s always changing, too. It’s just how my mind works.”

Over the years, she has worked with a variety of glazes, but now she has a few favorites that work for her.

“Keep things simple,” Butler said, though her work is known for strong color and lots of texture. She used to work in porcelain, but now she’s changed over to a stoneware body.

“It’s a white stoneware, so I get the same effects,” she said. “I like having a little more feel to the clay, and a little more grit.”

For Butler, the most important quality that she aims for in her mugs – which are safe for food, microwaves and dishwashers – is that they feel right.

“My pieces are meant to be loved and used,” she said. “I worked really a long time on those handles and have worked at making the rim comfortable. I learned a lot of that from watching Chad, and I had some really phenomenal teachers in college.”

Butler said 2020 was a pretty good year. With the pandemic canceling the city’s fine art fair and the Sturgeon Bay Art Crawl, she’s turned her energy online, selling through Etsy and promoting her work on Facebook and Instagram. She also sells directly by appointment, through social media and at The Pearl on the corner of 3rd Avenue and Michigan Street in Sturgeon Bay.

It was a good year personally as well. In May, the 30-year old artisan and her husband had a daughter, Lucy. Their four-year old son, Grant, has already taken a role at the gallery: drawing a name from among those who had entered the annual giveaway of a Valentine’s Day mug.

Butler’s studio is her sanctuary, she said. She works at her pottery in the morning, then spends the afternoons with her children.

“It’s kind of a blessing and a wonderful way to live,” she said.

Though some people told her she’d never make it on art alone – that she’d need a second job – she thought differently.

“Lizzie, you live in Door County,” she’d say. “You can do pottery. I have my regulars that just keep buying pottery, and you wonder where they put it all.”

And Butler finds that Door County is a great place to be an artist.

“I couldn’t have put myself in a better place,” she said. “The amount of talent in Door County, from potters to jewelry artists and more, is inspirational. There’s really no place like it.”Find Liz Butler’s art at lizbutlerpottery.com. Her annual spring sale will be held May 29, starting at 9 am.