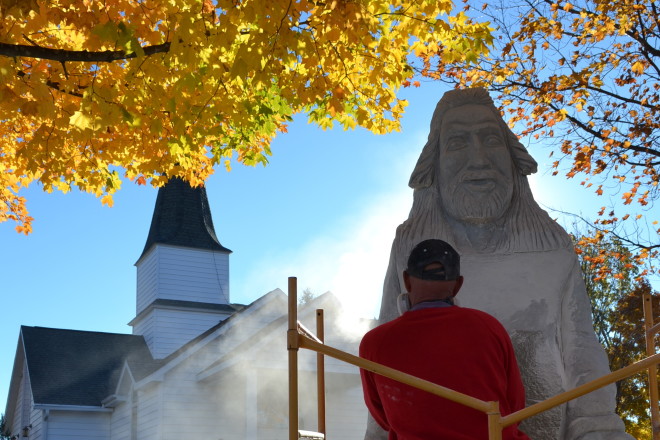 It is a crisp, sunny October morning and artist Jeff Olson is easing a tile cutter into a 5,000-pound slab of limestone in the parking area of St. Paul’s Lutheran Church in Juddville.

A half-face respirator covers his mouth and nose, protecting his lungs from the cloud of white-gray dust coming off the large piece he has spent the past four days shaping into a monument of the church’s namesake, Saint Paul. In just 10 days, on the first of November, the piece will be dedicated to the congregation and greater community.

At that time, nearly 50 hours of manual labor will have gone into shaping Saint Paul at the moment of his conversion on the road to Damascus, a moment Olson deemed of utmost significance in researching and creating the piece. 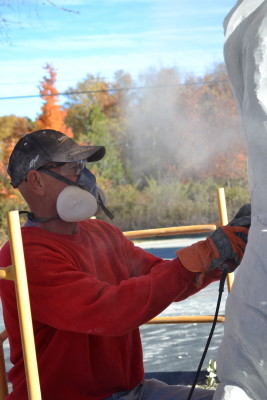 “It’s based on Acts 9 where Paul changes from Saul to Paul and changes from Judaism to Christianity,” Olson says during a break from carving. “It’s when he’s on the road to Damascus and Christ appears to him and he goes blind. He’s blinded and he confronts Christ and he confronts his past religion and what’s going to be his future calling. It’s at the point that I look at it that all Christians come to – you accept faith in what Christ teaches you.”

The limestone Olson carves into today came from The Quarry Mill in Sturgeon Bay and went through its own journey, from quarry to flatbed to front end loader, to land on the small swatch of grass in the church’s parking area. To date, he has carved off approximately 500 pounds while shaping Saint Paul’s head, arms, tallit, tassels and perhaps most importantly, his hands, open and facing forward.

It is a different form than what Olson had originally envisioned, showing me the initial sketch of Paul holding his hands up in a confrontational manner, though Olson admits to following Michelangelo’s philosophy that an artist leases the form from the stone.

“Rather than being confronted by Christ, I thought I would put his hands down to make it a more welcoming gesture and that’s kind of the same thing for the church,” Olson says. “It welcomes you into the church.”

It was an artistic liberty Olson felt free to take, having done his due diligence in researching clothing of the first century and the symbolism and tradition behind certain pieces of clothing, such as the tallit being considered “the visual word of God,” and the tassel foretelling “how many whippings [Jesus is] going to get.”

“Everyday I go out there and my response immediately is, ‘Wow,’” remarks St. Paul’s Pastor Frank Kauzlarich. “I can’t stop myself from saying, ‘Wow.’ … He’s a good artist and has a lot of passion, and he’s done his homework.”

A painter in his pre-retirement years, Olson has built a solid reputation as a sculptor since moving to Door County full time a decade ago.

He is the artist behind a number of carved structures in the county, including the 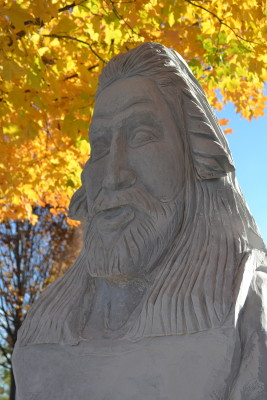 carved totem poles at Not Licked Yet, “Bubba” the wooden golfer at Stonehedge Golf Course, and the limestone carving, “The Performers,” at the Peg Egan Performing Arts Center, among others. He also sells sculptures at Edgewood Orchard Galleries and coordinates carvers for Sturgeon Bay’s annual Fire & Ice Festival, which he also participates in.

Pastor Kauzlarich, himself relatively new to the peninsula, recalls Olson being one of the first individuals to approach him with one very important question.

“He said, ‘What do you think Saint Paul looks like?’” Kauzlarich smiles.

“It’s a wonderful gift,” he says of Olson’s creation. “It’s what I think everyone is called to do – you have particular gifts, we all have varieties of gifts, we’re all members of the same body of Christ but we’re gifted by the Holy Spirit with different gifts. That is one of the many gifts that Jeff has and he was willing to share it. He’s being faithful in the call to share his gifts. You can’t beat that.”