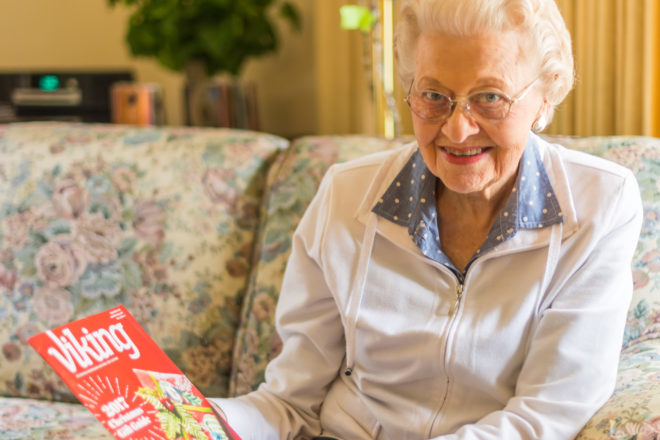 Lorraine Selvick holds Viking magazine, a publication from the Sons of Norway. Photos by Len Villano.

It’s not surprising that, along with men who are celebrated for their accomplishments in business, the arts, philanthropy and religious pursuits, Door County is also home to women with equally diverse talents.

For example, there is a woman who helped her late husband operate four successful businesses.

There’s a woman who turned a skill she learned as a child into a 13-year creative job with one of the county’s largest employers.

There’s a woman who loves the heritage of her ancestors so much that she founded not one, but four chapters of an international organization and rose to serve as the district director.

And there’s a woman who traveled alone to a foreign country with only a rudimentary grasp of the language, yet learned to speak, read and write that language so well that she now teaches it to others.

The surprising thing is that all these women are Lorraine Selvick.

Lorraine’s parents, Otto and Anna Olson, were born in Door County, but her grandparents were Norwegian. Born in Chicago, Lorraine attended the one-room school in Hainesville for four years during the Depression, but later returned to Chicago to graduate from Tuley High School (following in the footsteps of another Norwegian, famed University of Notre Dame football coach Knute Rockne). 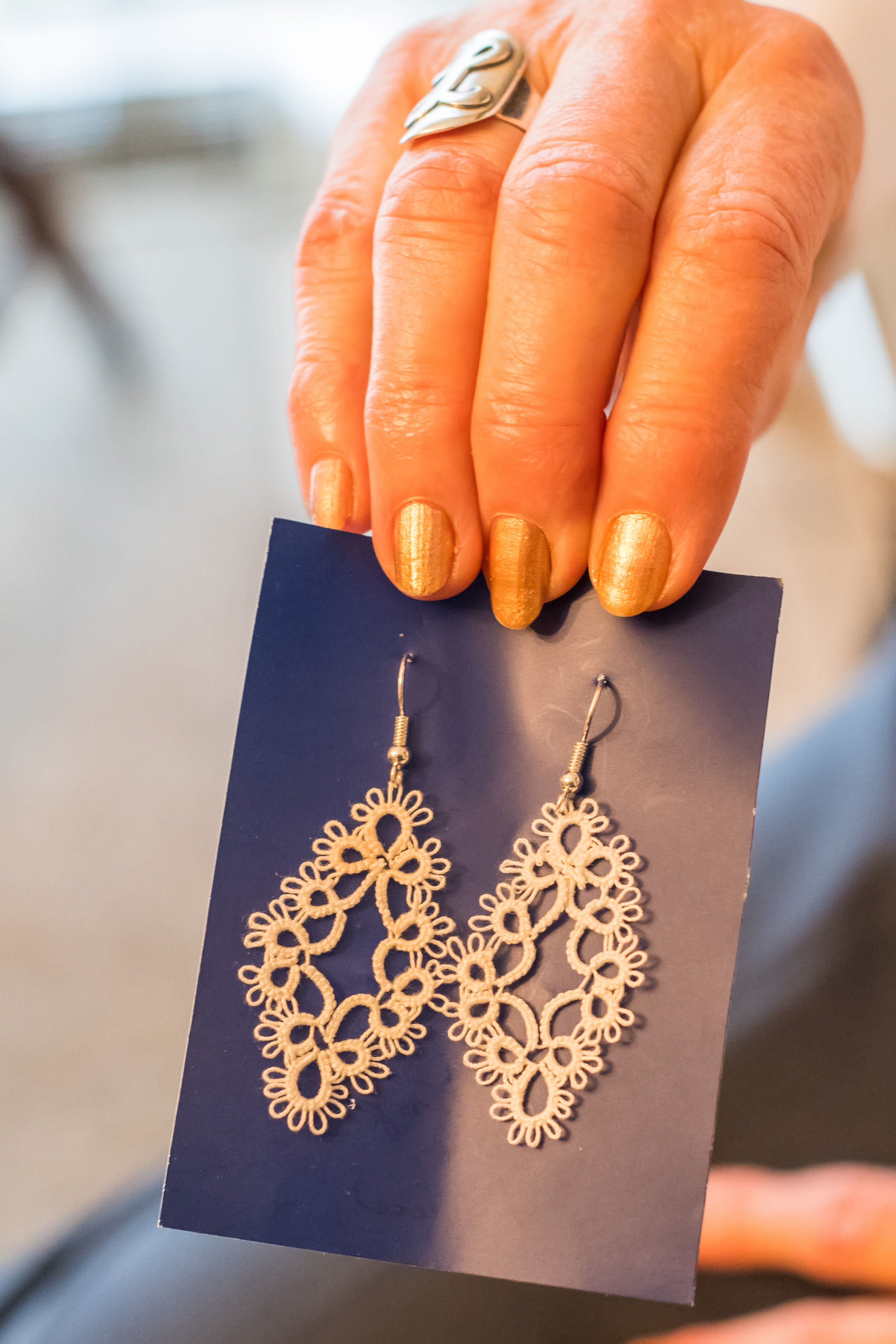 A pair of earrings Lorraine Selvick made with just thread.

When she was a senior at Tuley, Bernard “Bud” Selvick’s family stayed at Elms Resort, a resort Lorraine’s grandparents owned in Green Bay. Her cousin told her about “the cute boy” who was there and suggested Lorraine write to him. She wrote long letters to Bud for eight months, and received one-line replies! They were married in 1948.

Their first business venture was buying Cliff Dwellers Resort on West Duluth Avenue in 1949, when rent for the 10 original cottages was $6 or $7 a day; now it ranges up to $185. The Selvicks sold the resort in 1957 and moved to Florida to care for Bud’s dad. When he died a week later, they were at loose ends.

During the next 10 years, they operated a motel near Mount Dora, Fla., (“purchased by mistake,” Lorraine said, when an unscrupulous realtor lied about what they were signing) and were so successful selling vacuum cleaners that they bought the business in Sanford, Fla. In the back room of the store, Lorraine made draperies for friends. When the owner of the drapery shop next door saw her at work one day, he hired her to do all his custom work.

When she and Bud returned to Sturgeon Bay in 1967, she heard that Palmer Johnson was looking for someone to make draperies and bedding for their yachts. Lorraine took in a sample of her work, was hired on the spot and spent 13 years there. “They always ordered twice as much material as I requested ‘in case I made mistakes.’ I told them I didn’t make mistakes, and there was always all that material left over,” she said.

In 1975, Lorraine saw an ad in a local newspaper, asking people interested in forming a Sons of Norway Lodge in Sturgeon Bay to come to a meeting at the Scandia Supper Club. “It was me and six men at that first meeting,” Lorraine said, laughing. “But the idea caught on, and we started the lodge with 206 Door County members.

“When you’re a dedicated Norwegian and want to keep the culture going, this is what you do,” she said. “Sometime later, I heard that Norwegians in Sheboygan Falls wanted to start a lodge, but were going to call it something else. Bud drove me there and said he’d wait in the car to rescue me, in case I was thrown out. But when the meeting was over, Sheboygan Falls had a Sons of Norway Lodge.”

On the way back to Door County, Lorraine remembered that Bud’s doctor in Green Bay was Norwegian, so she left a note in his office, suggesting that Green Bay should start a lodge. “By the time we got home,” she said, “he’d left a message saying, ‘Let’s go for it!’”

Lorraine was instrumental in starting a lodge in Marinette, too, after several people from there had attended meetings in Sturgeon Bay, but it only lasted 12 years.

“We had so much fun at the Scandia Supper Club,” Lorraine recalled. “The owners were Norwegian, all the food was Norwegian and the buffet table was shaped like a Viking ship. When Scandia was leveled in 1991 to make room for the interchange of Highways 57 and 42, the lodge moved their monthly meetings to the First Baptist Church. Pastor Cory Dahl told us we were welcome to meet there if we promised to serve lutefisk dinners.”

When Lorraine was a child, her mother, Anna, spoke only Norwegian to her, but she never tried to learn the language. When she and Anna visited Norway in 1982, her mother did the talking. By the time Lorraine returned with Bud in 1984 to visit his relatives, she could speak a little. When she was a delegate to the international Sons of Norway convention in 1990, interpreters were provided, but when she visited afterward with Bud’s family, she was on her own.

“I was surprised to find how much I understood and could respond to,” she said. 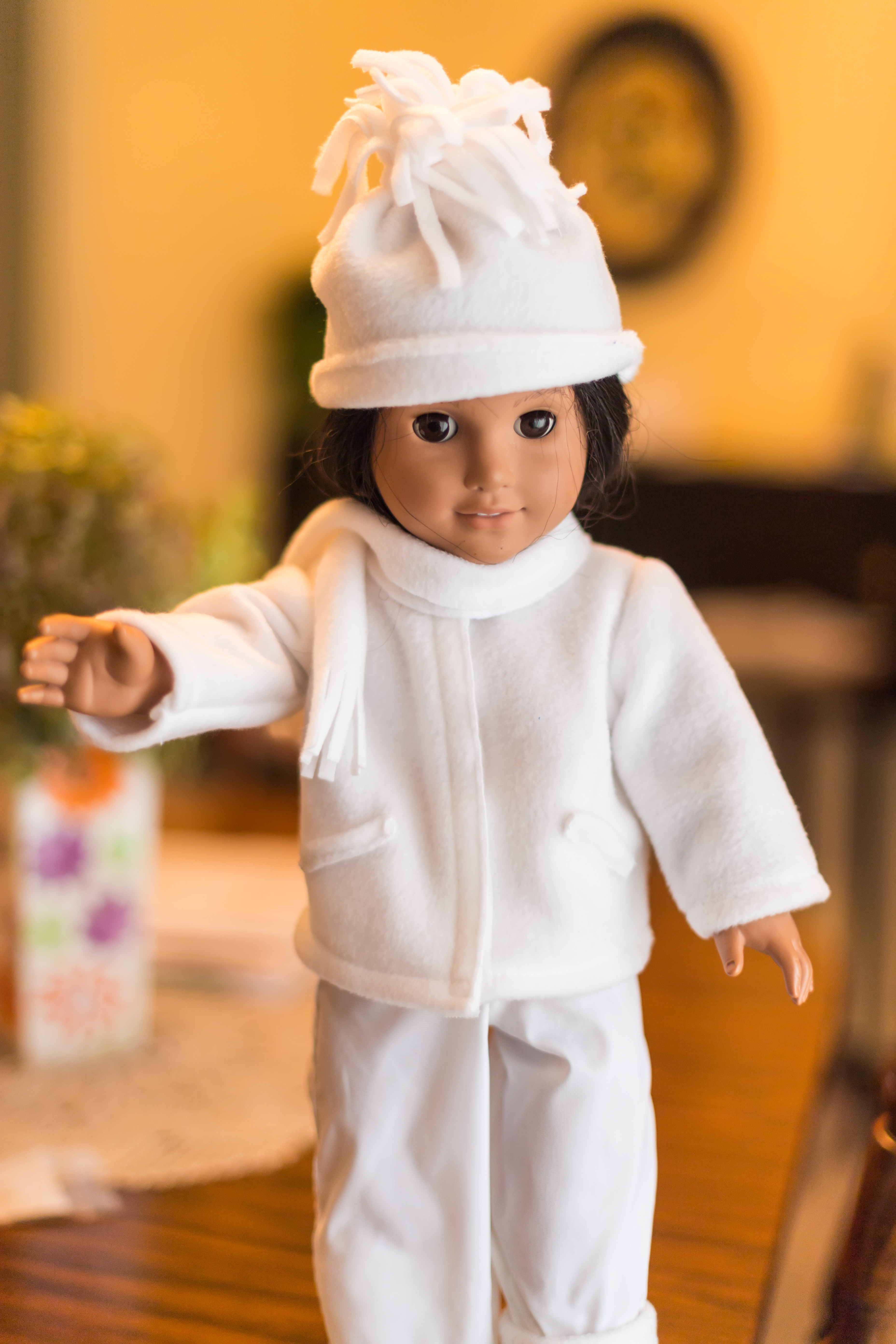 She returned from that trip eager to start a class to help others learn Norwegian. She taught for three years at Northeast Wisconsin Technical College (NWTC), using the book Norwegian in 10 Minutes a Day with a dozen students. “Norwegian is an easy language to learn,” Lorraine said. “It’s all phonetic; you just have to know where to put the accents.”

When Bud became ill, Lorraine discontinued the classes to care for him until his death in 2013. She’s restarted the free classes with eight students, meeting at the First Baptist Church, and would be happy to enlarge the group to 10 (contact her at 920.743.9600).

And the rest of the time, she makes items and food to sell at the Sons of Norway’s major moneymaking events – the annual Lutefisk dinner and Norse Fest, held every August at Sturgeon Bay High School. Lorraine prepares and bakes all the lutefisk for the Sons of Norway annual dinner, and creates items to sell at Norse Fest. She learned tatting from her mother, as well as hardanger weaving or hardangersøm, a form of needlework using counted-thread and drawn-thread techniques. The few people who still know how to use a tatting shuttle mostly create lacy borders for handkerchiefs.

“Too boring,” said Lorraine, who fashions delicate earrings and pendants. If the thread becomes knotted, the piece of jewelry she’s creating is ruined, but not wasted. The loops already formed become decorations on hand-made notecards. She also makes, in her spare time, American Doll clothes.

You’ve heard of the Renaissance man? He had nothing on Lorraine Selvick.