Carlin Hatch, a local woodworker, Ephraim resident and Door County native, operates out of the woodshop and studio adjacent to Fine Line Designs Gallery. Inside, Hatch gathers several different pieces of the Fyr Bal medallion he’s in the process of assembling. He lays them out on the table.

“I looked at my grandma’s as an example. She was Fyr Bal chieftain in 2008. Fred Bridenhagen made her medallion, and it’s ceramic,” Hatch says, contemplating his own work. “I looked at it to see what kind of expectations they had.”

Hatch’s design begins with a circular disk of maple with bird’s eye figuring. In the center of the disk are three curved pieces of Wenge wood, a dark Brazilian wood with distinctive patterning. The biggest piece hooks at the bottom and cradles a small ball. The image represents the traditional Fyr Bal symbol.

Hatch says, “I chose the Wenge wood because of its form, the movement of its grain and how it looks like fire. The maple kind of looks like a moonscape. When I finish, it will look even more exaggerated. I liked the lines of the Wenge against the patterned maple, which almost looks polka dotted.”

Six talons, three on each side, are arranged around the central piece. They are made of laminated cherry and walnut wood, and are asymmetrical. The wood on one side is stacked first with cherry, then walnut, and cherry again. It’s the opposite order on the other side, a happy accident, according to Hatch.

“This is my interpretation of Fyr Bal,” he says. “I wanted to give it a different life, a different look.” Continuing, “There’s kind of a tribal influence as well. It is the Fyr Bal Chieftain after all.” 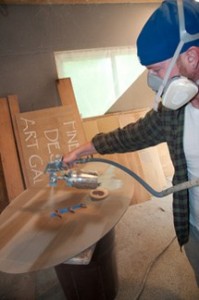 Now in its 47th year, the election of the Fyr Bal Chieftain has been a tradition since 1965, the year after the festival began. Starting Memorial Day Weekend each year, community members can place their votes for a fellow resident to honor at the festival.

For a number of years in a row, Fred Bridenhagen, owner of Water Street Gallery, made the medallions.

“Ideally, what we would like is to feature a different Ephraim artist every year and get exposure to different parts of the creative community,” says Rachel Willems, Tourism Administrator of the Ephraim Business Council/Ephraim Visitor Information Center.

While Scandinavian tradition runs deep here – the words Fyr Bal actually mean “bonfire” in Norwegian – Willems says, “The interpretation is completely up to that artist. That’s why we think it’s special to feature different artists, because each one brings something different to the making of the medallion.”

Audrey Hatch, who turns 94 in August, sits in her living room with a photograph of when she was elected Fyr Bal chieftain in 2008. She holds a bouquet of flowers and looks positively radiant, and her son and daughter, David and Donette Hatch, are pictured beside her.

The event begins with a pontoon boat carrying six boys aged first to fourth grade, dressed as Vikings. They depart from South Shore Pier and pick up the chieftain from a private residence on the north end of the village.

As the pontoon boat returns to downtown Ephraim, an Ephraim Business Council member reads a short biography of the chieftain, leaving folks guessing whom it might be.

“The night of the ceremony chieftain is supposed to be a surprise,” Audrey says. “I knew it, but the people who gathered in the hall waiting for the chieftain to come in didn’t know.”

Upon arrival, the Viking boys usher the chieftain across the street and up onto the stage in the village hall. Here the chieftan is formally introduced, given flowers, robed and awarded with the medallion.

“The ballot is completely open – it’s blank. There aren’t nominees. It’s all write-ins,” Willems says. “I think the community has an idea of who they would like. They buzz about it at the post office. Everyone says, ‘Ok, we’re going to honor this person.’”

Audrey says, “I think people get in cahoots [to be elected to chieftain]. The year before I had it, someone asked me, ‘Would you be offended if I would suggest your name?’ ‘Course I wasn’t offended.”

All previous chieftains are invited to attend the ceremony. They sit alongside one another in the front row of the town hall.

“When all the past chieftains come and are wearing their medallions you can see the progression and the different interpretations over the years,” Willems says.

After the Fyr Bal Chieftan gives a small acceptance speech, the Viking boys bring the chieftain outside and down to the main bonfire right across the street from the village hall. This is where the ceremonial lighting takes place, with the chieftain giving the fire its first breath.

“I was supposed to do it,” Audrey says. “But I’ll tell you a secret. Scottie Weborg did it! He was right there. He saw to it that it got lit. He said earlier, he had a paper bag that some brats had been in, so it was kinda greasy, he said, ‘I stuck that in there so that it would catch good.’ It’s gotta get lit!”

This year’s medallion – the 46th in the series – will be presented at the Fyr Bal ceremony on Saturday, June 18. The arrival and announcement of this year’s chieftain continues to be a special ceremony and an event that distinguishes a particularly involved community member. While the honor is taken seriously, the event is meant to be a fun time for all and a celebration of another glorious Door County summer on its way.