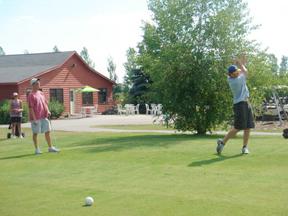 With some buzz in the local golf community, Stonehedge Golf Course has re-opened its doors as of July 3 of this year, under new ownership. Jon and Laurie Oswald, of Green Bay and Egg Harbor, purchased the 9-hole golf course and clubhouse, complete with restaurant and full bar. It all happened rather quickly and somewhat unexpectedly for the Oswalds.

“We were up here Memorial Day weekend and saw the For Sale sign,” said Jon. “We made an offer and before we knew it, we were signing papers.”

Since 1982, Oswald’s career experience was in the cable television business, 10 of those years co-owning Broadband Solutions, based in Green Bay. After his partner bought him out less than two years ago, Jon had been semi-retired and searching his way through a competitive job market.

“My partner wanted to go bigger,” said Oswald. “I was really looking to run a smaller operation.” Being visitors to Door County since the mid-80s, and homeowners in Egg Harbor for the past few years, the new endeavor seemed to be the perfect change the Oswalds were looking for.

Oswald feels that owning and operating his own business lends itself to running Stonehedge regardless of it being a completely different type of business.

“Business is business,” said Oswald “It’s all about the numbers and covering your expenses. I’m sure I’ll make some mistakes along the way, but I’ll learn as I go.” The new owners are making some minor changes as they move forward, with more emphasis on golf.

The restaurant and bar will have a scaled back menu, featuring simple bar food.

Although he humbly refers to himself as just an “average slicer,” Jon loves to golf and wants his guest to enjoy themselves at his golf course.

“We’re really catering to the kids and the families,” said Oswald. “We want them to know that they can come out, and they’re not going to get pushed. They can just relax and have a good time.”

An exciting opportunity awaits young golfers as Horseshoe Bay Golf Club opens its course to junior golfers in their Junior Championship, Friday, July 31. Boys and girls between the ages of 12 – 17 are eligible, with 12 – 14 year-olds playing the white tees and 15 – 17 year-olds playing the blue tees. A $50 entry fee includes 18 holes of golf and lunch. Tee times are between 8 and 11 am. Early sign up is encouraged, as the tournament is only open to the first 70 registrants. Registration closes at 5 pm on July 28. For an entry form or for further information, contact Horseshoe Bay at 920.868.4103.