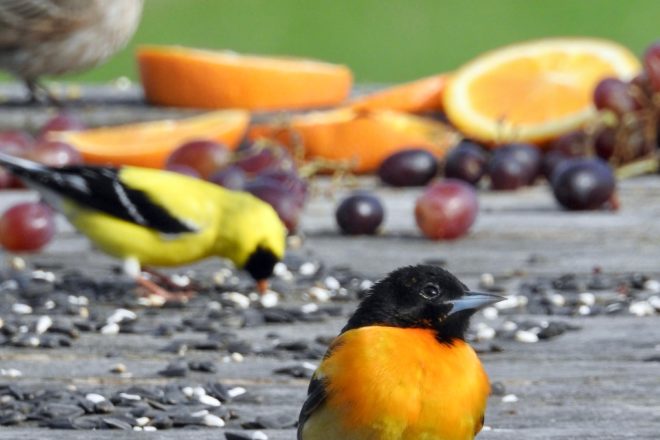 Because they concentrate bird populations in their yards through feeding, birders may not always notice the declines in migrating and local populations. Shown (front to back) are a Baltimore oriole, American goldfinch and female house finch. Photo by Kevin Naze.

Unless you’ve been off your devices this week or are on a break from reading newspapers, watching television and listening to the radio, you’ve likely seen or heard the dire news concerning North American birds.

But is it really that bad?

Before I get blasted by fellow birders, factory-farm opponents and climate-change activists, let me explain.

First, a recap of the news: According to research published online by the journal Science, wild bird populations in the continental U.S. and Canada have declined about 29 percent during the past half-century.

Even common birds such as sparrows and blackbirds are in decline.

Although I don’t dispute the findings from what they’re calling the most comprehensive inventory ever done in North America, I’m curious why they don’t point out that the majority of the decline – about 2.5 billion birds of the 2.9 billion estimated to have been lost since 1970 – took place before the turn of this century. It’s been bizarre to see climate-change activists jumping all over the report, even as the worst losses – nearly two billion birds – took place in the 1970s and ’80s.

Additionally, fear-mongering statements are accompanying many of the reports. One example, quoting Sciencemag.org: “The findings raise fears that some familiar species could go the way of the passenger pigeon, a species once so abundant that its extinction in the early 1900s seemed unthinkable.”

Researchers say we’ve lost about 90 million red-winged blackbirds in the past 50 years. Still, the study estimates a population of more than 170 million red-wings today – and we don’t shoot them for food as Native Americans and early immigrants did with the passenger pigeon.

Either way, there are many factors to consider. Habitat loss is huge, no doubt. And then there are cats. Yes, cats.

The American Bird Conservancy (ABC) goes so far as to say that predation by domestic cats is the number-one direct, human-caused threat to birds in the United States and Canada. In the U.S. alone, the ABC says tens of millions of outdoor cats kill an estimated 2.4 billion (yes, billion!) birds every year.

Other causes of death include collisions with human-made structures such as wind turbines, buildings and windows; disease; entanglement or entrapment in nets, pipes and the like; predation by other animals; starvation; and weather events, among others.

Among the data that exist for estimating bird populations is a century’s worth of Christmas Bird Counts, 50 years’ worth of the North American Breeding Bird Surveys and today’s eBird reports.

An international team of scientists from seven institutions analyzed population trends for more than 500 bird species and augmented its models with another source of measuring bird abundance: more than 100 NEXRAD weather-radar stations across the U.S.

Migrating birds can be seen on radar, especially when they’re high in the sky at night. Researchers concluded that the amount of “bird biomass” flying overhead has decreased by about 14 percent since 2007 and was steepest in the eastern half of the country.

Although there’s obviously no perfect way to estimate bird populations, researchers say they have reached a point where they trust the math. They also believe that habitat loss through development and agricultural practices is likely a driving factor in many declines.

There is a silver lining, however. In addition to reduced losses in recent years, some bird populations have increased. For example, waterfowl are up by 35 million, raptors by 15 million and woodpeckers by 14 million.

Conservation of key habitat and educating people about how they can help could slow or even reverse the decline in many species.

The backyard birder may not notice a big difference, but doing things such as making sure you regularly clean and disinfect feeders and keep your cat indoors – or monitor it while it’s outside – can help.

For tips about reducing window strikes, check out links at allaboutbirds.org and abcbirds.org.

It’s your last chance to provide input to DNR fisheries staff about the Lake Michigan salmon and trout stocking proposals for 2020 and beyond. Find background about the decision-making process by searching “DNR Lake Michigan salmon and trout meetings 2019” on the internet, or go to the Kewaunee/Door Salmon Tournament’s Facebook page to see an archived video from a recent meeting in Green Bay with sport anglers. Comments are due by Sept. 30. Email them to [email protected].

Salmon Run Is On

The DNR is firing up the pumps at the Besadny Fisheries Facility this weekend and is planning to carry out its first chinook salmon egg take Oct. 3. Besadny’s annual open house is Oct. 5, 9 am – 3 pm.

Strawberry Creek won’t be running its pumps this year due to extremely high water, but staff members will take eggs from fresh-run fish as needed. The DNR is planning to take data from the first kings next Wednesday.