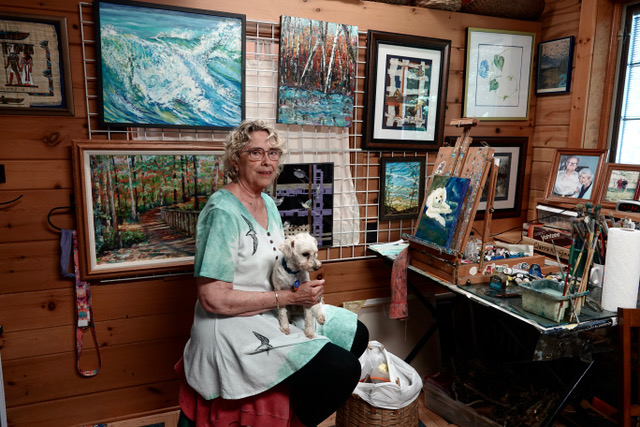 Marcia Nickols work can be seen at The Pearl and AMO, both on 3rd Avenue in Sturgeon Bay, as well as at Mill Road Gallery in Sister Bay.

The two aspects of Door County that Marcia Nickols likes most as an artist are the natural beauty and the camaraderie of the county’s many artists.

She and her husband, Tom, started coming to Door County from their home near Madison during the 1980s. After retiring from a 34-year career as a high school arts teacher in 2005 and buying a Door County residence shortly after, Nickols plunged into the Door County arts scene.

“One of the reasons I loved coming up here is we would go to all the galleries, and I got to know several of the artists,” she said. “When we moved up here, I started taking classes between The Clearing and Peninsula School of Art.”

Nickols also took courses taught by other artists, including Bridget Austin and Ed Fenendael, which helped to expand her skills and network.

“Then I joined the Door County Art League and got to know so many more artists,” she said. “I just kept learning, and my work blossomed because, maybe for the first time, I was doing what I wanted to.”

She went on three of Fenendael’s art tours, which took her to Ireland, Claude Monet’s garden at Giverny and most recently to Egypt.

“It was really cool,” Nickols said. “We learned so much.”

In addition to growing as an artist through classes and travel opportunities, she paints all year long – but she doesn’t place a lot of value on consistency. She’d rather break the rules than follow them.

“I am not a control painter,” she said. “I’m doing it because I have a great time and I am loving it.”

“Every time I see someone doing something that looks really cool, I want to try it,” she said. “It’s a learning thing again. I want to see if I can do it. That’s why you will see me go from one thing to another.”

That includes her art media.

“My favorite is probably water-based oil because I like how I can play with the colors in there,” Nickols said.

Water-based oils act like oils, but they don’t require turpentine for cleanup.

She’s also worked in wool felt to create critters for sale at The Ridges Sanctuary – herons, squirrels, bears, ducks and fish made of colored felt and mounted on pieces of wood that she finds on her walks.

One thing Nickols doesn’t do, however, is commission work.

“I don’t ever do commissions because it would never be in my head what they are looking for,” she said. “When I do it, it’s something so cool, and I want to see if I can do it. I don’t want a job. I just want to have a good time.”