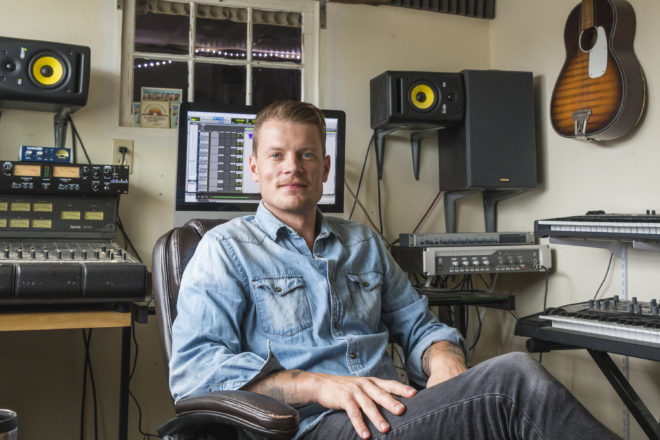 When music producer and drummer Marcus Trana came to Sturgeon Bay from his native Norway, he thought he was done with the music scene.

“I was burned out,” he says. Trana relocated to Wisconsin in 2013 with his wife, Charlotte Baierl, a Door County native, and the couple started Nistebox, Sturgeon Bay’s signature food truck.

The food truck was a success, but Trana found himself “antsy and kind of depressed.” It didn’t take long for the music to find him again. Little did he know he had landed in the midst of a burgeoning recording and performance scene.

“I met pat mAcdonald and then heard about this thing called Steel Bridge Songfest,” he laughs, referring to the Sturgeon Bay music festival that draws artists from across the country. At first, people thought of him as “just the burrito guy.” Then one night Trana sat in on drums at a local jam session. “After that, they thought I was okay.”

Since then, Trana has become enmeshed in Sturgeon Bay’s music scene as a producer, performer, teacher and songwriter. In 2014, he joined forces with other artists at the Tambourine Collaboratory, the “creative super-collider” that offers studios to creative types of all sorts. The Collaboratory houses Trana’s recording studio Painted Recordings, where he has worked with the likes of melaniejane, Marja Johnson, WiFEE and the HUZz BAND and Deathfolk. The building is adjacent to Sturgeon Bay’s Holiday Music Motel, headquarters for the Steel Bridge Songfest and related songwriting projects and events.

“It’s been a great creative space to be part of,” says Trana. “I didn’t pay any rent the first year — pat’s idea is to get the people here, and build on that.”

The studio is bare bones, but warm and inviting. The walls of the recording and teaching space are covered with cardboard egg cartons for sound insulation. “We will do something fancier someday, but egg cartons actually work really well.” A small office next to the studio is furnished with cozy vintage armchairs, table lamps, and at the center, Trana’s mixing board.

In the studio, he has recorded and mixed songs from Begging His Graces, the recent tribute albums to pat mAcdonald, including his own song, recorded under the pseudonym Sonamund (an homage to his mother’s maiden name). It’s also where he teaches his students, both individuals and budding young bands.

Trana fell in love with music at an early age. At 12, he and a group of friends formed a rock band. “We were just four buddies, figuring it out,” he says. “It was awesome.” His brother played drums too, and the boys’ childhood and teenage years were a series of band practices in the family basement. “My dad got to the point that he couldn’t sleep unless we were playing music,” he says.

Norwegian culture was a strong influence on Trana, too. His parents listened to everything from jazz to The Rolling Stones, and also exposed Trana to native Norwegian music.

“The Sami, our native people, have a chant-like music called Yoik that I love,” he says. He was also exposed to songwriter greats like Bob Dylan, and ‘90s German synth music — “moody, chanting, broad-brushed music,” as he describes it. All of it has influenced Trana’s style and his perspective on the world.

Trana grew up in the north of Norway, the land of the midnight sun, where for four months of the year there is no sunlight, and summer days never end. “We would just live these endless summer days, until we got tired, and then wake up and not know what time it was.” Born in Trondheim, the northernmost fishing village of mainland Europe, he describes Norwegian culture as very social.

“The saying goes ‘if you have a party and you don’t want your neighbor to come, you have to lock the door.’” Storytelling is at the heart of Norwegian life, where people gather in pubs and have storytelling jams.

Perhaps the extremes of dark and light explain why Trana loves his studio at the Tambourine Collaboratory — social opportunities abound with other artists just down the hall, but he can just as easily close his door and turn inward to focus on his music.

At 16, Trana and his family moved to Oslo, which, along with city of Bergen, is the center of the Norwegian music scene.

“It’s a really eclectic scene,” he says. “Jazz, hip-hop, garage bands. People are surprised, but Norway is the biggest producer of black metal.” He lent his drumming talents to several bands, including the girl band The Shitsez, and Simon Says No!, which Marcus describes as “shoegazy.”

The bands toured in Europe, Japan and the U.S. “But we only saw New York, San Francisco, L.A.,” he says. “Not the America in between. That’s what I think of as the real America.”

Then one fateful night in 2007, he met a girl from the “real America.” Out for a night on the town with his brother, he met Charlotte, a visiting anthropology student at the University of Oslo. “We were married six months later,” he says.

In Oslo, Trana shared his passion for music by teaching drumming and helping people discover the joys of the rock band. “I taught in a program just for girls,” he says. “It was great. We had attorneys, doctors, bartenders. They came in after work and made a band. These girls rocked.”

Now Trana’s teaching career has come full circle. “I love hanging out with kids,” he says. “They are so hungry for new things, and I’m always learning from them, too.” Trana’s protégés, a foursome of local boys called Radiobox, made their debut at Steel Bridge Songfest last summer. “It was just awesome seeing those guys up there.”

“When you love music, like I do, it’s like having another language you can speak, one that everyone who loves music shares. As a musician, I know I’ll never be lonely.”