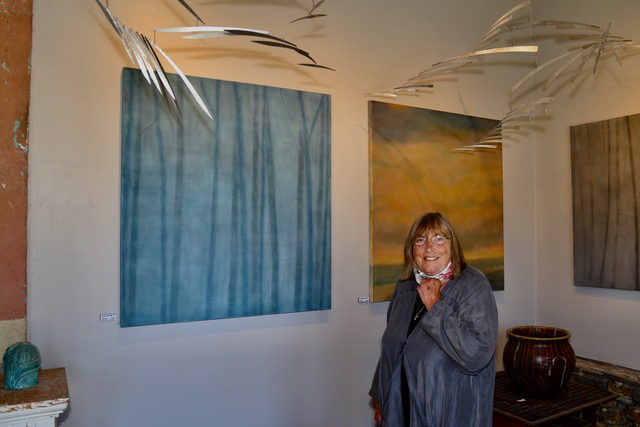 Margaret Lockwood at her studio gallery. Photo by Tom Groenfeldt.

Margaret Lockwood, whose gallery is on the corner of Michigan and 2nd avenues in Sturgeon Bay, is looking forward to a good year of painting – after a slow start. She’s been steadily at work since completing a commission for a woman in Dallas whose parents have bought her work over the years.

“I had three canvases primed and ready to go, and I was just waiting for the energy to come. They were close to the size the woman in Dallas wanted, but not exactly, so Allin stretched a canvas for me. Then once I did her painting, I was back in the groove, and I could go on and do the other three canvases that were waiting for me.”

Lockwood said she much prefers large canvases, often larger than 40 by 40 inches.

“I paint some smaller canvases, but I don’t love doing them,” she said. “It’s my big painting niche,” she added about her work’s place in the Door County art world.

“I think I am going to get a lot of painting done because I am in the mood. I found an article from about 2000, a little after I got here [to Door County] in ’94. They interviewed me and Joe Lopez and Franne Dickinson because we were doing work that was outside what everybody else was doing.”

Landscapes have long been the predominant subject of Door County painters. Lockwood was probably among the first to do abstract paintings and has encouraged others, particularly women painters, to be bold in their approach to art – to think outside the lighthouse, so to speak.

Lockwood has been working on a sketchbook from a Miller Art Museum pandemic project, the Sketchbook Challenge, which provided small, blank books for artists to fill with anything they wanted – words, pictures, graphics – and then turn in after they’d filled the volume. The results may become an exhibit when the pandemic subsides.

Lockwood paged through some tight designs; a sketch of what she imagined the virus might look like; an American flag in black, white and brown; and some images to commemorate the death of George Floyd, including some “I can’t breathe” quotes repeated on the page – things she put on paper shortly before the Sturgeon Bay march for Black Lives Matter.

“I’m not done, and we can’t turn it in until it is finished,” she said. She has seen on Facebook that at least one participant has already finished. Most of the pictures she’s seen for the books are influenced by what is going on now, she said.

Lockwood and her husband, Allin Walker, founded Woodwalk Gallery in Egg Harbor in 1994. It began in the old schoolhouse in Juddville that’s now Tony Staroska and Rebecca Carlton’s Juddville Clay Studio and Gallery.

Lockwood and Walker bought the Egg Harbor Woodwalk Gallery property of 11 acres in 2004 to accommodate what became a list of more than 60 artists, and they sold it to Jillaine Burton and her husband, Andrew Seefeldt, in 2015.

With the move to Sturgeon Bay and the new Lockwood Gallery, they have simplified the business. Now Lockwood is the only painter exhibiting, but her gallery also carries pottery by Prisca Benson-Fittsher, Renee Schwaller, Bob Davis and Rebecca Bodmer; sculpture by Dan Bresnahan; and jewelry by Angela Lensch.

The gallery is open Thursday – Sunday, by appointment or by calling Lockwood – she’s usually around. With less foot traffic this year, she looks forward to having more time to paint.