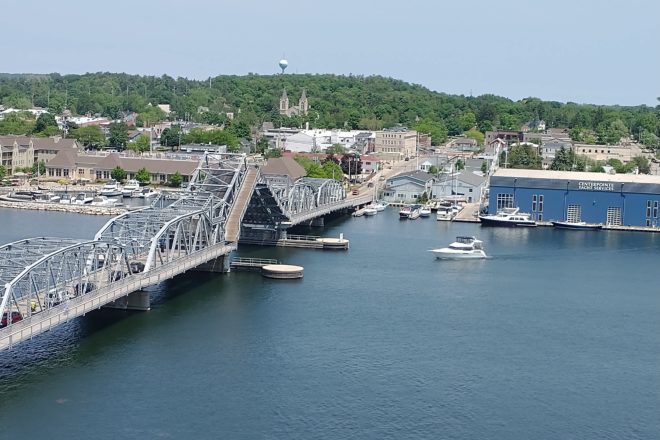 The Michigan Street steel bridge opens to let a boat pass through. Photo by Jessica Gatzow.

The idea for a lighthouse tower grew out of the museum’s need for more exhibition space 20 years ago, and today, the $7.2 million construction project provides a way to educate the public about Sturgeon Bay’s grand maritime involvement. The George Kress Foundation donated $1 million to honor lifelong mariner Jim Kress, for whom the tower is named. After its christening in May, it’s now open to the public.

Museum visitors can take in the view rain or shine from behind the large windows installed in three sides of the 10th floor, or they can gaze out from the rooftop Baumgartner Observation Deck. It’s like touring miles of Sturgeon Bay from a bird’s-eye view: Directly below, tugboats were lined up at Sarter Marine Towing, and across the bay to the left, 1,000-foot vessels were docked at Fincantieri Bay Shipbuilding, including a littoral naval ship from Marinette.

Floors two through nine of the tower are works in progress, but three of them should be completed by the fall, and the rest by May 2022. Each floor will offer a different interactive experience, with the maritime environment, the peninsula’s people, maritime navigation, commerce, shipbuilding, recreational boating, fishing and shipwrecks of Door County as the themes. For now, an elevator takes visitors straight from the first floor – where an introductory informational video plays – to the 10th.

Installed under each set of windows are user-friendly, interactive kiosks that supplement the viewing experience without distracting from the view. They display an image of the view outside each window, with numbers that label the landmarks. Wondering what that building is in the distance? Curious about the significance of each bridge? Just click on the corresponding numbered image on the kiosk, and you’ll find images and descriptions for the Sturgeon Bay Canal Lighthouse, the Bayview Bridge or any other major landmark that you can see from the tower.

Ready for the open-air viewing experience, I headed up a flight of stairs to the rooftop observation deck. Those who don’t mind heights will appreciate the panoramic perspective of Sturgeon Bay. On the day I visited, boats glistened and water shimmered in the sunlight, and the wind was mild enough to allow me some time to enjoy the view. The rooftop viewing deck is accessible May – October.

The water of Sturgeon Bay appears incredibly vast when viewed from above. This perspective, as well as information from the 10th-floor exhibition, explains the significance of the bay as a maritime hub: Because it was just 7,400 feet short of connecting the bay of Green Bay and Lake Michigan, workers dug the remaining way across, and by 1890, their efforts finally offered complete maritime transportation that didn’t involve passing through the dangerous Porte des Morts (Death’s Door). The shipping canal isn’t all that visible from the lighthouse tower, but the aerial perspective allows you to see where the bay channels into it.

I heard a tugboat below sounding the end of a tour, and I noticed the distant rumble of cars passing over the bridges that frame the lighthouse tower. The Michigan Street Bridge – or “steel bridge” – briefly halted traffic while a vessel passed through, and I watched as two bridge sections gradually rose as a ship from CenterPointe Yacht Services left its dock to head toward Green Bay.

The tower offers a new perspective on familiar sights such as these, and it’s sure to enlighten visitors about some unfamiliar ones, too.