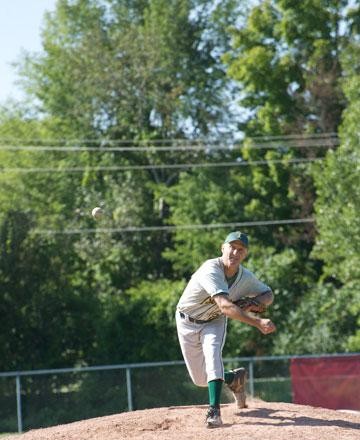 The ageless Mare Woerfel carries the Islanders to an upset over Egg Harbor in the DCL playoffs.

It was an ordinary August day 10 years ago when Washington Island won its first Door County League (DCL) baseball playoff championship in 26 years. But the game played that day, and the career of the man at the center of it, are not ordinary at all.

In a 13-inning contest that is still talked about as one of the league’s most memorable, the Islanders beat the Institute Cubs, 4 – 3. The hero was pitcher Mark Woerfel, who threw a complete game that included 10 strikeouts, hit a two-run home run to tie the game in the 11th inning, and scored the winning run after bunting in the 13th – all at the age of 46.

“That game,” said then-Washington Island manager Ted Jorgenson, “was something you couldn’t even write.”

The game, which Woerfel describes as the most memorable of his career, marked the first time in 46 years that Washington Island won both the regular season and playoff championships. But it also serves as an apt microcosm for Woerfel’s 29-year journey through Door County baseball – a journey that continues today.

Woerfel, widely considered the best player in DCL baseball history, first joined the league as a pitcher for the Sister Bay Bays in 1976. Success came quickly, as Woerfel led the Bays to a regular season championship in just his second season, picking up the 1977 Pitcher of the Year honors along the way, the first of 11 such honors. Sister Bay, in its Bay Days heyday, would go on to win 10 regular season titles in the next 18 years.

“He was a dominant pitcher from the time he got out of high school,” WDOR radio station owner and longtime broadcaster Eddy Allen says of Woerfel, who pitched at Gibraltar High School and later at a junior college in Iowa.

Woerfel says his pitching style has changed as he’s aged.

“When I was younger I struck out a lot of guys because I could throw pretty hard, and I always had a good curveball,” he says. “Now that I’m older, I rely more on mixing speeds and that type of progression. If I had known how effective that was when I was younger, I wouldn’t have tried to strike everybody out.”

After his dominant run with Sister Bay, Woerfel spent seven years playing in Menasha before getting the itch to return to the Door County League in 2000. That’s when he ran into Jorgenson at the league’s hall of fame banquet.

“Ted, I wanna pitch for the island,” Woerfel said. Jorgenson was dumbstruck. Woerfel had been a target of the island’s notoriously harsh fans over the years, and he lived two hours away.

“How many beers have you had?’” Jorgenson responded. He still doesn’t know why Woerfel wanted to come, he’s just happy he did. “He brought the championship back to the island. They love him up here now.”

Woerfel said the decline in pitching talent over the course of the 1990s led him to play for the Islanders.

“I think years ago, there was better pitching in the league – there were more top-notch pitchers,” Woerfel says. “That’s kind of why I ended up on the island, because I felt they could use the pitching.”

But Woerfel has embraced the youth movement the league has seen of late.

“The young kids that are playing ball are staying in better condition and really focusing on aim,” Woerfel says.

Over the course of Woerfel’s career, the league has seen the rise of aluminum bats and designated hitters. Clark Erickson, Woerfel’s former Sister Bay teammate and now the Bays’ manager, marvels that Woerfel is still pitching at a high level. Woerfel ranks sixth in innings pitched and ninth in strikeouts this season, and says he was clocked at 80 mph around the time he won the championship with Washington Island.

“I don’t know how his arm’s lasted that long,” Erickson says. “Nobody knows how. It’s kinda just a freak of nature thing.”

Woerfel attributes some of his endurance to his work as a painter, which he says strengthens his arm. He also works hard to stay in shape, cross-country skiing, riding a stationary bike and lifting weights in the offseason. Once the weather gets warmer, Woerfel bikes and runs sprints. He can throw year-round in his basement, and takes advantage of the baseball fields near his Neenah home during the summer.

A strong competitive streak doesn’t hurt either. Jorgenson calls Woerfel one of the toughest competitors the league’s ever seen.

“Sometimes he ruffles some feathers with opposing players,” Jorgenson concedes. “When he walks on the field he’s there to win, and he can be intense. But after the game he’ll have a beer with you and leave it on the field.”

That’s what’s kept him making the two-plus hour drive up to Washington Island for every home game, to lead a team that he brought back from the cellar 10 years ago.

Woerfel says he’s thinking about retiring after this year, but isn’t sure yet. For now, he continues to embrace the spirit of Door County baseball, a spirit that, even for the best player in league history, couldn’t be more simple.

“It’s not like work for him,” Allen says. “He just enjoys playing baseball.”