It was almost the end of the World’s Toughest Mudder, and Matt Hanson heard he was just a few minutes behind the guy in fourth place. Hanson was 92 miles into the race, he’d completed the last big obstacle, and he wanted that fourth place.

“I’m a barefoot runner,” Hanson said. “I knew I was faster barefoot, so I kicked off my shoes and did the last quarter mile barefoot… I beat him by 40 seconds.”

The barefoot sprint will probably cost Hanson eight toenails, but that’s okay. Those grow back. 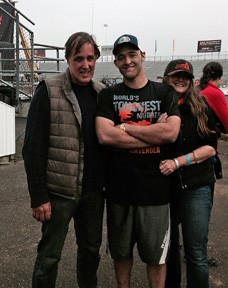 Matt Hanson with his parents Jon and Patti. Photo submitted.

This was Hanson’s second World’s Toughest Mudder, a 24-hour race where participants compete to rack up the most laps around an obstacle course. The obstacles involve extreme heights, frigid water, electric wires and plenty of physical and mental endurance.

Hanson works year round to prepare for such a grueling competition. He exercises for about six hours a day, starting with a 15-mile run at 4:30 am. In between classes at Northern Illinois University where Hanson is in graduate school to become a school counselor, work and homework, Hanson fits in more time for CrossFit, weightlifting and swimming. On the weekends he surfs Craigslist, looking for runners selling their spots in nearby marathons.

“Think about how much time you put into your hobby, watching TV or going on the Internet,” he said. “I get that same excitement and enjoyment out of working out.”

Hanson hasn’t been participating in these extreme, or ultra-endurance, events for long. He played sports in high school, had always lifted weights, and until about 15 months ago had hated running.

“I was done working out for vanity,” Hanson said. “It was no longer interesting to me… I’ve got the attention span that doesn’t allow me to do one thing for a long time, so having a bunch of things going on at once [like the World’s Toughest Mudder obstacles] gives me a way to exercise and have a lot of fun at the same time. I have to put my whole attention on the race.”

The World’s Toughest Mudder isn’t the only ultra-endurance competition Hanson’s tried. He regularly runs marathons and even longer races, and this summer he participated in The Death Race, a three-day race in Vermont where participants sign a waiver that simply says “you may die.” The obstacles in that race are more down-home, like chopping wood, but that doesn’t make the race any easier. Ninety percent of participants in The Death Race don’t finish. Hanson was one of 19 who did.

Training for these ultra-endurance races hasn’t taken away from the other aspects of Hanson’s life. Instead, he said it helped him get back on track.

“This has revitalized my drive to do a lot of different things,” he said. “It helped me be more optimistic about a lot of things in my life. I ended up graduating early and going to graduate school because I felt a little more driven. Things that used to seem impossible seem a lot more possible because I reached the top of a mountain.”

That mountain isn’t the last Hanson plans to scale. He’s gunning for first place in next year’s race, even at the expense of 10 toenails.