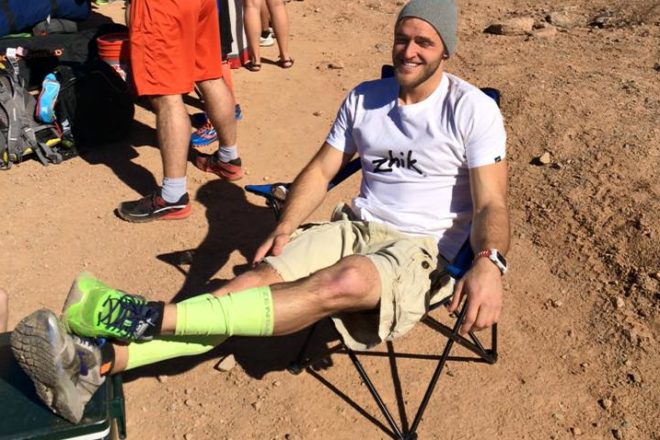 Matt Hanson before the World’s Toughest Mudder in 2015. Hanson finished 11th after running 75 miles before being taken to the hospital to be treated for cold exposure. Submitted photo.

Sturgeon Bay native Matt Hanson will compete in his fifth World’s Toughest Mudder in Las Vegas, Nev. this weekend. Hanson returns to the 24-hour obstacle course race with a renewed determination and training plan after dropping out due to hypothermia the past two years.

“I ran my third World’s Toughest Mudder and I got hypothermia and ended up in the hospital,” said Hanson on his 2014 attempt, which echoed into the 2015 event as well. “Which killed me because I come from Wisconsin.”

Hanson is seeking the success that he had in his first two attempts at the event, taking 7th place in 2012 and 4th place in 2013, finishing 95 miles in the 24-hour time limit. His move to Rock Springs, Wyo., this year was in pursuit of the conditions he would face in the high and dry desert of Nevada.

“I applied to 40 jobs, none of them in places less than 6,000 feet,” said Hanson, who just finished his graduate degree in counseling from Northern Illinois University. “When I moved out here, I moved to the side of a mountain. Since then I’ve been trying to do 12 miles a day plus a workout.”

Hanson competed in a string of marathons and ultramarathons (running races of more than 26.2 miles) upon moving to Wyoming, trying to get acclimated to the altitude. He ran the Kat’cina Mosa 100k race in the Wasatch Mountains of Utah and a marathon in Colorado the next week. First crawling his way up the mountains as his lungs learned how to do more with less oxygen, he can now float up mountainsides on his way to course records and race wins across the country.

The World’s Toughest Mudder takes place on a five-mile course filled with obstacles ranging from frigid pools and barbed wire crawls to electrically charged chains and monkey bars. Athletes complete as many laps of the five-mile course as they can within the 24-hour cutoff. The winner typically runs more than 100 miles.

Despite his success at other events, Hanson admits that all of his other events are in service to the World’s Toughest Mudder.

“Everything else I do in preparation for this,” said Hanson. “Where I live now is identical to the terrain in Las Vegas. The last two years I’ve been in the top five when I fell. If I had held my pace I would have won both years.”

Some of the most prolific athletes in the ultra endurance world say these events are not a matter of going fast, but rather, not slowing down. Leading up to this year’s event, Hanson has re-evaluated his hypothermic downfall, setting aside his cold-weather Wisconsin pride.

“I always think I’m above getting cold and I’m too cocky about that,” said Hanson. “Staying warm is my top priority. I think the big issue is I just never put my wetsuit on early enough.”

Hanson is also battling the higher profile of obstacle course racing, which now brings some of the best athletes in the world with prizes of up to $100,000. What was once a sport for a few crazy fitness nuts has now become a career for some athletes, with media coverage and a fan base bringing a brighter light to the sport.

“I think a big change has been the competition has become a lot more stiff,” said Hanson. “To be a school counselor who wants to beat these pros… There are so many pro runners that come out here and they have fans.”

Hanson’s parents and siblings will join him in Las Vegas, standing by his side at the finish line instead of a hospital bed.

“It’s going to be a much different race this year,” said Hanson.

To watch live coverage of the 24-hour event, go to toughmudder.com/events/worlds-toughest-mudder.