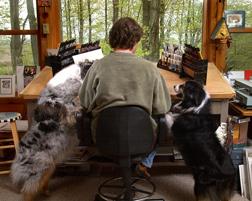 McCartney at work in his studio with Amos and Cosmo at his side.

As a sixth grader, cartoonist Mike McCartney didn’t think his talent for drawing cartoons was anything special.

According to McCartney, he belonged to the “artist” clique. He says, “The guys I hung around with could all draw very, very well, and I just thought it was a normal thing to draw. It wasn’t until I moved away from that environment that I saw everyone could not do what we could do so easily.”

Making fun of friends, relatives, and teachers by drawing cartoons was McCartney’s way of getting attention in school. His sixth grade teacher designated an entire bulletin board for him and his friends to post their artwork. He says, “That was really special.”

Fast forward to 1979, when McCartney and his wife DeDe moved to Door County. Upon arrival in the county, he got a job at the shipyard, and a year later, he got laid off from the shipyard. It was then that he decided to try to make some money with his cartoon abilities.

He started in 1981 by drawing caricatures of people for $4 a piece at festivals like Mayfest and the Door County Fair. Even though it has been 25 years since he drew at the fair, he is still remembered as “the guy who drew cartoons at the fair.” 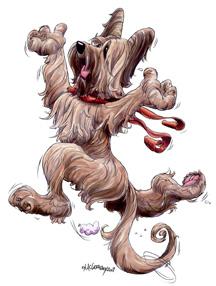 During this time he also had a short stint drawing animals for a greeting card company, and he drew designs for a bar napkin company.

While McCartney dabbled in drawing, his career as a dog cartoonist started in part because of his mom and her Great Danes. He used to draw her Great Dane cards for Mother’s Day and birthdays, and she showed these cards to some of her Great Dane loving friends. One thing led to another, and his mom encouraged him to come to a Great Dane dog show she was attending and draw caricatures.

The McCartneys then attended an all breed show, where over one hundred breeds of dogs were present. He says, “Someone came up to me and asked me if I could draw a Whippet. I didn’t even know what a Whippet was.”

McCartney and Company’s first products were black and white cards. Because the business was brand new and small, they cut costs by folding and packaging the cards themselves. McCartney recalls the entire family getting involved including his two children Butch and Stevi.

“We would sit around the house and fold and package cards,” he says. “It was what we did.”

The beginning of the company was a learning process for the McCartneys – from learning what a Whippet was to deciding what breeds would sell the most. They started with 25 breeds and McCartney says, “Naturally the 25 breeds we had rarely came to the booth, so I’d go home and quickly draw the rest of the alphabet.”

Their new business took them all around the United States to various dog shows. The whole family would travel to the shows on the weekends, taking them anywhere from the Carolinas to Minnesota and back to school on Monday morning.

Today, McCartney and Company has wholesalers all over the world including Germany, Italy, Japan, England, Canada, Australia, and some Scandinavian countries.

While McCartney has never been to these countries to see his designs, he has seen one of his t-shirts in a rather unexpected place. He says, “One time we were at Mount Baker in Washington State, and there was someone standing at the top of the mountain with one of my shirts on; and I just said, ‘nice shirt.’”

Besides selling his goods to wholesalers, maintaining a Web site that customers can order from, and selling at dog shows, another way McCartney’s designs reach the masses is through Purina. Since 2002, he has drawn a calendar for Purina every year. From the beginning of March until the middle of July each year, he devotes his time to developing this unique piece of art. He incorporates 150 breeds into his calendar and each month has a different theme. He says, “Once I get into drawing the calendar, I can’t wait to get out [to my studio], it starts to take shape as I build it.”

The calendar takes a lot of work for McCartney to design and requires DeDe to take on the entire workload of the daily operations of McCartney and Company for over three months, but it is worth it to them. 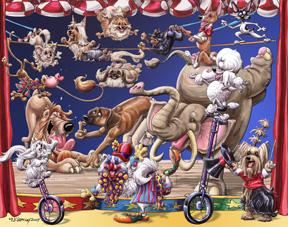 “McCartney’s name next to Purina is a beautiful thing because they’re one of the oldest companies in the country,” he says.

Currently, McCartney is always busy drawing dogs, shipping out goods, and attending dog shows, but in the future he has some new projects he would like to tackle. One such project is a coffee table book, telling the history of the breeds along with his designs. On this project he hopes to pull in his artistic children.

“I would love to have both kids lay it out and design it,” he says. “It would be an honor.”

Another project in its beginning phase are children’s books he and DeDe have been working on featuring Bianca and her dog Whimsey. Mike draws, obviously, and DeDe writes the stories.

Mike is the hand that draws the cartoons but DeDe is the creative mind behind the company. 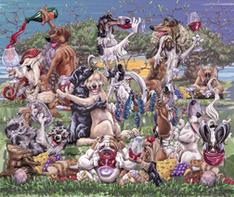 McCartney says, “DeDe is the one who has all the ideas – the good ideas anyway. That is the team part of it.” She gives him the themes to use for the Purina Calendars, comes up with new product ideas, and gives him creative input on his designs on top of running her own business, Madison Avenue Wine Shop and Door County Olive Oil Company.

DeDe walked in during our interview to give Mike numerous messages and he asked her, “Where do all the ideas come from?”

When I asked him if he saw retirement in the future, McCartney said, “Are you kidding me, this is retirement.”

To check out all that McCartney and Company has to offer, visit their Web site http://www.mccartneysdogs.com. In Door County, their products can be found at Pet Expressions on Highway 42 in Carlsville.