The soon-to-be star of the Open Door Bird Sanctuary is a ball of fluff Eurasian Eagle Owl that was hatched March 23 at a breeding operation in Oregon and arrived at its new home at the sanctuary in Jacksonport on April 24. 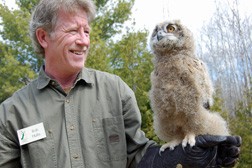 His name is Aisling (pronounced Ashling, Gaelic for “dream”) and he “is growing like a madman,” said Rob Hults, executive director of Open Door.

Aisling has had human imprinting from the beginning. He is being groomed to be an education bird and a representative of all that the Open Door Bird Sanctuary will stand for when it is fully operational. Perhaps its most important function will be as the only bird rehab clinic this side of Green Bay.

At almost seven weeks old, Aisling is already completely comfortable perched on Hults’ gloved hand, which bodes well for his future as an avian educator. Soon Hults will introduce young Aisling to leather straps – known as jesses – that will go around his legs and be tethered to Hults for school and other visits he and Aisling plan to make. 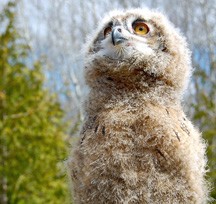 The Eurasian Eagle Owl is, as you may have guessed by its name, a native of Europe and Asia. Hults said it’s a cousin of our Great Horned Owl and Aisling will grow to look like a Great Horned, complete with tufted ears.

With their acute night vision and hearing, combined with excellent flight and gliding skills, Eurasian Eagle Owls are considered top of the food chain raptors. To have one at the sanctuary that has been reared by humans will be an extraordinary experience for all involved.