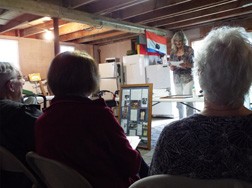 Although he was an unassuming man, “Johnny Fitz” or “John D. Iron Fist” became legendary in Door County for many reasons: his seemingly superhuman strength; working from predawn on; farming prowess; his entrepreneurial acumen; and his recuperative powers.

Having miraculously survived a major heart attack in 1985, Johnny Fitz finally succumbed to another heart attack on Nov 3, 1988, while setting a massive steel dock off of Door Bluff. However, his legacy lives on in his family, his wife Phyllis, his seven daughters and his son and namesake, John, who follows in his very large footsteps.

Kari Fitzgerald Brandt’s book, Seasons of a Farm Family, is a treasure chest of accounts of John David Fitzgerald’s life and times. The book is available at Al Johnson’s Swedish Restaurant & Butik, Island Dairy and Crafters Connection, and from Brandt directly at 920.857.7157.