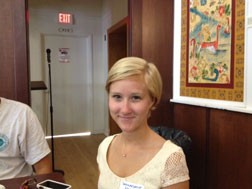 A Gibraltar High School graduate, headed to college in the fall, may wind up on the career path of her famous grandfather, writer Sydney J. Harris.

“I would love to be a writer, maybe for a magazine,” Nora Harris said as she was being recognized as a scholarship winner at this past Saturday’s pancake breakfast run by the Ephraim Men’s Club.

Her grandfather was an award-winning editorial writer, drama critic and columnist for the Chicago Daily News and the Chicago Sun-Times.

Nora, daughter of David and Rebecca Harris of Fish Creek, never knew her grandfather, who died in 1986. She is headed for Northwestern University in Evanston, Ill., where she was admitted to the journalism school and then switched to arts and sciences. She will study English and psychology.

The club served 565 pancake breakfasts, a record number. “It was a lot of fun for everyone,” said breakfast chairman Jim Reeve II.