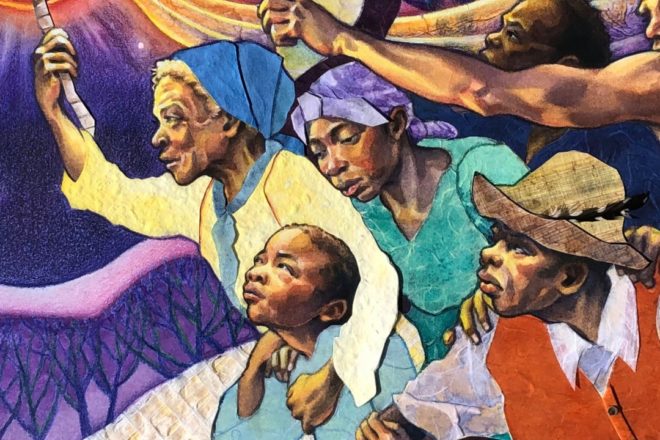 This is the second year when the juried show has been open to artists from all across the state. When it began, it was open only to artists in Door, Brown, Kewaunee and Manitowoc counties; it then added artists in Oconto and Sheboygan counties in 2017; and as of last year, it went statewide.

“This year we had 344 submissions and 70 accepted works,” said Helen del Guidice, curator of exhibitions and collections at the museum. “That is a 45% increase in submissions from 2021.”

Entries came from 71 towns and cities across the state. Artists from the exhibition’s five original counties submitted 105 entries, compared to 125 in 2020, while those in the more recently eligible localities entered 239 submissions.

Frank Jaurez – one of the exhibition’s three judges, along with Meg Lionel Murphy and Brandon Bauer – said he finds it encouraging when art museums such as the Miller create opportunities for artists from other Wisconsin regions.

An artist, award-winning educator and founder of Artdose Magazine in Sheboygan, Jaurez said that “this demonstrates forward thinking on a larger scale of introducing to the local community artists who work traditionally or contemporary, and to provide local artists the opportunity to network with regional artists.”

The show reunited two young artists who were in The Yellow Room Collective’s show at SŌMI Gallery in Sturgeon Bay last November: Claire Kat Erickson and judge Meg Lionel Murphy. They – and jeweler Jen Hough – grew up in Door County, moved away, came back during the pandemic and were surprised to find other young artists working in the area.

In her judge’s commentary, Lionel Murphy said she was impressed by the caliber of the submitted work.

“The submissions to this open call offered a fascinating glimpse into what ‘home’ is here. The art that I advocated for in this show is the kind of work I want to see more of in this state. I crave the political, adventurous, highly crafted, layered, body-centric, playful and probing. I found all of that and more in the submissions.”

However, expanding the juried show to artists across the entire state has not been universally popular.

“I know there has been some discussion about that,” said artist Cheryl Stidwell Parker, who is a member of the Miller Museum of Art’s board of directors and hosts an annual portrait show, the Door Prize for Portraiture. “Some artists said they liked it when it was just Door and Brown counties, [and that it] was more intimate and was a good time for the artists to get together. But at the same time, some people were complaining they saw the same artists getting into the show each year.”

She noted that much the same could be said of the Door Prize for Portraiture.

Personally, Stidwell Parker is in favor of the decision to include all artists in Wisconsin. As an artist herself, she likes to see what others around the state are doing. She also felt the Miller’s juried show wasn’t competitive enough when it was more limited, so the expanded eligibility also means that the museum is earning more from entry fees.

“That helps defray expenses for putting on a good show,” Stidwell Parker said.

And although some Miller observers think the move to statewide for the juried show could impair local fundraising, Stidwell Parker thinks that by appealing statewide, the Miller will be able to raise more money.

Additionally, for area residents who don’t get to the museums and the art scene in Milwaukee, Chicago, Minneapolis or New York, having art from across the state come to them is attractive – for both those who appreciate art and the museum.

“Going statewide is going to bring more attention to the Miller and increase its stature in the state,” Stidwell Parker said.

The Miller Art Museum unveiled its 47th Juried Annual – a survey and celebration of contemporary work by Wisconsin visual artists – during a Sept. 17 reception that welcomed more than 120 attendees. The exhibit also honors artists in several categories.

The 47th Juried Annual, on display through Oct. 31, showcases 70 contemporary, two-dimensional works by 52 Wisconsin artists and marks the second year when artists from across the state were eligible to submit work.