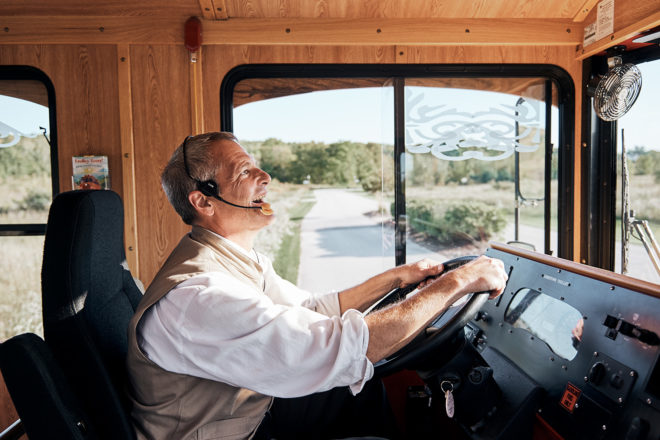 Chainsaws and swords and fires: Oh, my!

Stephan Reynolds stood at the front of a Door County Trolley wearing an old-fashioned district attorney’s outfit and presented a briefcase of clues. Night fell all around, the fog settling just on the other side of the windows that lined the trolley.

In full character, Reynolds held out a Zippo lighter: the first clue in a series of six. He urged us to remember it for our first stop before taking his seat at the wheel of the trolley. He turned on a song with people chanting, “Murder! Murder!” against a backdrop of rattling chains.

“When I really start to get into character is when I put on my outfit,” Reynolds said. “I treat it like it’s a play. It’s not just taking you on a tour and answering your questions and showing off some sites. When I get on that trolley, I am Stephan, former district attorney.”

The Murder and Mayhem Tour, now in its second season, is a form of “dark tourism” that explores places associated with death and tragedy. Door County is not immune to murder, Reynolds said, and there are some “doozies.”

Among the stories are some so gruesome that children younger than nine years old are not allowed to go on the tour. One reviewer even thought the age ought to be 13. The featured stories range from suspicious suicides to vicious stabbings to being burned alive.

Music with references to murder and crime provides the soundtrack for the tour: Johnny Cash’s “Hurt,” the Avett Brothers’ “Murder in the City” and “Psycho Killer” by the Talking Heads.

Some of the tour’s content came from the tour on which Reynolds began his training: Haunted Olde Sturgeon Bay. That tour has since been eliminated, but some of the stories shifted to the Murder and Mayhem Tour. Reynolds was quick to assure me that although those stories were tales of the paranormal, the ones on this tour are based in fact.

“There’s no suspending [belief] with [the Murder and Mayhem] tour because all of that stuff is a matter of public record,” Reynolds said.

The tour makes stops all the way from the trailhead of the Kangaroo Lake Nature Preserve off County E to Buffalo Ridge Road in rural Sturgeon Bay to the White Lace Inn in downtown Sturgeon Bay.

Reynolds – who is also the voice of the Activity Board on The Lodge 106.9 – has worked for Door County Trolley for three years. He enjoys doing research to add his own flair to the framework that the group built.

“I went and found some of my own fun facts,” Reynolds said. “Well, I don’t know if the word ‘fun’ applies as much.”

His research includes talking with people who were directly involved with some of the crimes, including Terry Vogel, a now-retired sheriff who worked on the David Dellis case in 1996.

“[Vogel] gave us all this great stuff, and I love when that happens,” Reynolds said.

Dellis murdered 15-year-old Michael Kasee in Green Bay, moved his body to Door County and then cut it into more than 30 pieces with a chainsaw before going on the run for a week.

Reynolds also stumbled across some information on the Donald Crass murder while playing pickleball at the YMCA. He asked a woman named Sue Crass who works there whether she was related. Through that connection, Reynolds was granted access to a document he’d never seen before and was able to include its details on his tour.

“Even though I’ve got these stories, I’m constantly tweaking them and retooling them,” Reynolds said. “I’m constantly learning new things because this is a small town and a lot of people, they remember these. They’ll take our tour, and they might tell you something you don’t know.”

Through another pickleball encounter, Reynolds met a man who lives in the house where the Durantys lived in Sturgeon Bay, next door to the Harris family.

In 1953, teenager James Duranty brutally stabbed and murdered his neighbors, Grace and Sumner Harris, who was editor of the Door County Advocate. Duranty was known to be fond of his neighbors, so the community was shocked. He himself didn’t know why he did it, saying, “Something upstairs told me to do it.”

The tour stops across the street from the houses. The man who now lives there wasn’t bothered about his address; instead, he found it interesting that he lived there.

Although most of the stories shared on the tour are decades old – the most recent took place in 2001 – relatives of those involved in these crimes are still around, and people live and work in the places where crimes have occurred.

The tour takes place only on public roads and in public spaces, and Reynolds said it’s not the trolley company’s intention to intrude on private lives. The company is quick to react to complaints if there are any, but the only complaint Reynolds has ever received asked him to park on a different side of the street.

In the same way that people love the Ghost Tour of Door County, people are interested to hear about the gore and violence that happens in a place that’s as quaint as Door County seems to be on the surface. Audiences are riveted, and Reynolds loves to be the person to share the stories.

“My favorite part is the storytelling,” Reynolds said. “I’m a performer.”

The Murder and Mayhem Tour runs Monday, Wednesday, Friday and Saturday through Oct. 26. Make a reservation at doorcountytrolley.com, and join the tour at the trolley station in Egg Harbor.