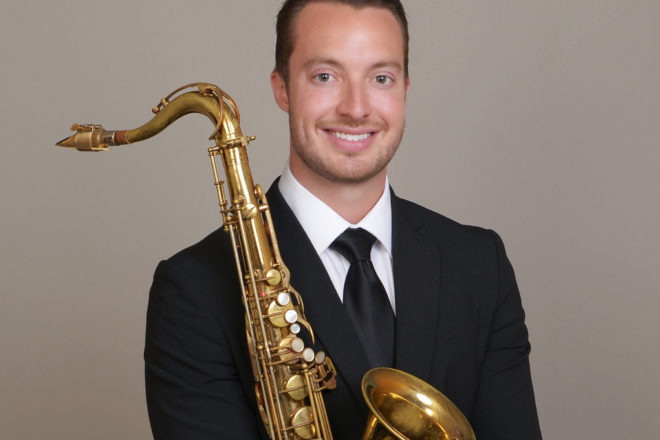 The Glenn Miller Orchestra will play close to 200 shows in a given year, traveling the country several times and crossing the Pacific to play in Japan. But when the orchestra arrives in Fish Creek to play a Christmas show at the Door Community Auditorium (DCA), it will be familiar territory for one key member.

“Birch Creek is really special,” Stabnau said when reached by phone as the band traveled to a show in Fitchburg, near Boston, Mass. “It’s hard to explain to people who haven’t been there that you’re in this small town and you play in a barn.”

On Dec. 11 he’ll return to Door county with a crew of 14 instrumentalists, plus a lead singer and vocal group. The show will include many hits from the original Glenn Miller Orchestra, a name which younger audiences may not recognize, but whose music they almost certainly will.

The band leader was one of the most famous people in the world at the band’s peak. From 1938 – 1942 the big swing band scored 69 top-10 singles – more than the Beatles (33) or Elvis Presley (38). All those accomplishments came by the age of 40, when Miller died when his plane crashed into the English Channel while flying to a show in Paris to entertain troops during World War II.

“I think this band has stayed around so long just for the popularity of that original group,” Stabnau said. “It was important music for the country at that time, and it might have been the most popular band in the world.

Today’s orchestra is composed of elite musicians who typically join the band for a year or two, drawn to the opportunity to play live music and see the country. But some stick around longer. One player recently celebrated his 5,000th show with the band. Stabnau is now in year four. He said the experience never grows old and he genuinely loves the music, but there’s something else that he loves about it as well.

“Having the chance to play live music every night is pretty rare nowadays,” Stabnau said. “The travel is great. We play big theaters, and small shows, ballrooms, outdoors. This is the last band of this style that really maintains that touring schedule.”

At the Dec. 11 show the band will mix in Christmas standards with the long list of Miller hits such as “In the Mood,” “Moonlight Serenade,” “Pennsylvania 6-5000” and “Tuxedo Junction.”

“Generally speaking we make it our goal to sound like the original recording, but the originality comes in the solos,” Stabnau said. “And even if you don’t know the music, give it a shot and you won’t be disappointed. It’s just a fun show to see.”