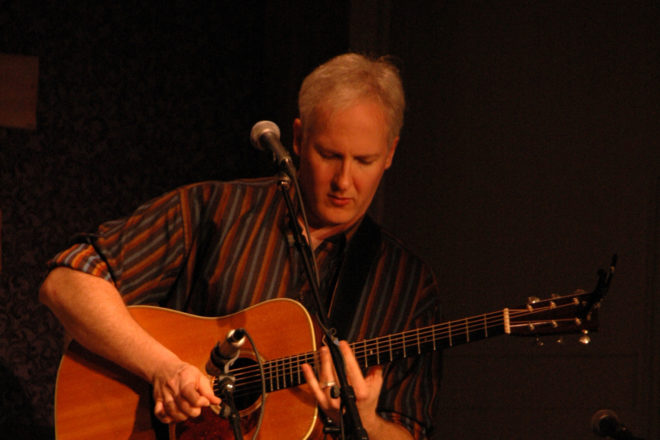 The first words Eric Lewis utters on his live recording at Camp David in Fish Creek are, “I have to say, I didn’t expect this many people to show up.” And once you meet the quiet, humble man with an accent that is distinctly not of northern Wisconsin, you can believe that he was surprised at the size of the crowd in the old concert barn. But that one show was no fluke in Eric’s playing history in the area. The Memphis-based multi-instrumental musician has been packing houses all over Door County for over eight years.

What began as a gig playing in the orchestra pit at American Folklore Theatre in 1999 turned into repeat visits to the county in various other contexts, at different venues and with many locally and nationally-known musicians. Included in the mix are talents such as AFT co-founder Doc Heide, other AFT favorites like Chris Irwin and Claudia Russell, and Tennessee musicians like Tommy Burroughs, Jimmy Davis and Andy Ratliff. In creating such a pattern, Eric has become an ambassador of music between two states, and the name “Eric Lewis and Friends” is now a staple in the Door County arts scene.

Ask Eric why he continues to make the trek from Tennessee to Wisconsin and he will tell you about “the beauty of the land, the beauty of the people” that make for such a warm welcome when he arrives in Door County. Still, Eric does not take his receptive audience for granted. “I aim to please,” he says. And that goes for any show at which he appears, from the “classy venues” like the Door Community Auditorium to the “good vibes” of Camp David, where in nine years his Labor Day concert has grown into a phenomenon, to places where he and his friends can really “let their hair down,” like the AC Tap in Baileys Harbor. Steve Mueller, owner of the AC Tap, looks forward to Eric’s performances because he does play to his crowd so well. Mueller says of Eric Lewis and Friends, as he calls the many combinations of musicians that have played with Eric, “they can feel what the crowd wants.” Mueller has heard Eric start a night with a quieter, folkier set for an older audience who may be sitting down and finishing dinner. However, by the second set he’s moved on to bluegrass and “by the last set,” Mueller says laughing, “it’s a jam session.” On nights when Eric and Friends start rocking, the Tap is so full of people dancing that it is hard to get a foot inside the door.

Even after hearing Eric play in one of these venues, you still could have trouble placing his music in one genre. When asked to classify his music, Eric insists that it does not fall under one label. And this is what makes him so easy to listen to, and to play with, says Doc Heide. Doc says that Eric’s “depth of musical knowledge and eclectic musical background” make it easy for him to play along with anything. When playing with Doc, Eric can move easily from folky bluegrass to lead electric guitar. This talent, together with Eric’s warm, genuine personality, keeps Doc “constantly looking for more reasons to collaborate with him.”

Eric acknowledges the influences of old-timey or country songs on his own writing, but he often “just gets inspired by stuff” and goes with it. He recalls a review of one of his recordings in Bluegrass Unlimited magazine, which criticized the untraditional nature of this “bluegrass CD.” Instead of trying to appease such bluegrass hardliners, Eric embraces the mixing of musical genres. “It’s an American tradition,” he says. “We learn by association and exposure.” Eric would like to remind such sticklers that bluegrass itself originated when Bill Monroe began mixing mountain music and the blues. Eric’s own musical history reflects, as he would say, this “cross-pollination,” beginning with childhood influences.

As a young boy in Tennessee, Eric was used to hearing his mother play the guitar and sing Bill Monroe and Hank Williams tunes. Eric’s grandfather, too, loved this music, and he played the banjo. Then during one trip to the nursing home where his grandfather eventually lived, an orderly walked in while Eric’s grandfather and mother were playing together. The orderly asked if he could play a song, and Eric had never heard anything like the rock and roll that he pounded out right there on the guitar. Eric was 12 years old when that orderly became his first guitar teacher and sparked his interest in rock.

After learning guitar, Eric went on to play several other instruments, including trumpet so well that he earned a marching band scholarship for college. However, Eric’s passion always stayed with the strings. When he was in his early 20s, he was in a traveling rock band. He played electric guitar and had hair down to his waist. Remembering those days makes Eric laugh as he offers sage advice, “If you’re ever going to do that stuff, do it when you’re young.” He loved the wild shows, but the rock and metal music, which Eric describes as “one-dimensional,” soon got old. Another style of music called instead, in the form of Gram Parsons’ twangy folk. After hearing a Gram Parsons recording, Eric returned to the music of his roots. He began playing acoustic instruments in bands that focused on bluegrass, folk and country.

Now, able to move fluidly among guitar, pedal steel, dobro, fiddle and mandolin, Eric has found his niche in combining musical styles. “In order to be considered a serious musician in Memphis, you have to play in at least five bands.” Eric’s ability to navigate among genres and instruments makes it easier for him to keep up with such expectations. He calls Memphis “one of the hardest places in the world to play.” The general public is so used to hearing great music all the time that any performer can become the wallpaper. But Eric says, “These are just the facts of playing in a city full of great musicians.” This same environment is what drives Eric to work as hard as he can at his art; as he says, “I get to play with a lot of talented people.” But even though Eric loves to live and work in Memphis, he looks forward to a different kind of response from the public when he visits Door County.

“I feel more appreciated in Wisconsin than anywhere else,” he says. In this more northern state, Eric’s fast licks and swinging beats are anything but wallpaper. “I can try new things and experiment without fear of criticism for doing what I want, what I love.” Not only does Eric eagerly anticipate this different response, but he cannot wait to share this art community with other Memphis performers. It’s such a nurturing place for friendship and music that Eric says, “It’s my job to share what I’ve gained in Door County with all the talented people I play with.” At the same time, he continues to enrich the musical diversity in Wisconsin by inviting these gifted professionals to collaborate with him here.

Eric continues to release new recordings; he and Tommy Burroughs will celebrate their new CD, “Walk the Road with Me,” in Door County this summer. And Eric continues to bring new talent and new sounds to the county for such events as the annual Camp David concert, which he has been planning for months. (For more information on Eric’s shows and recordings, visit his website: www.fuzzyfingers.com.) With all that he brings with each visit, Eric is a true musical ambassador between Memphis and Door County. As he says, in thinking about this unique relationship, “I have friends all over the country, but Door County is another home.”