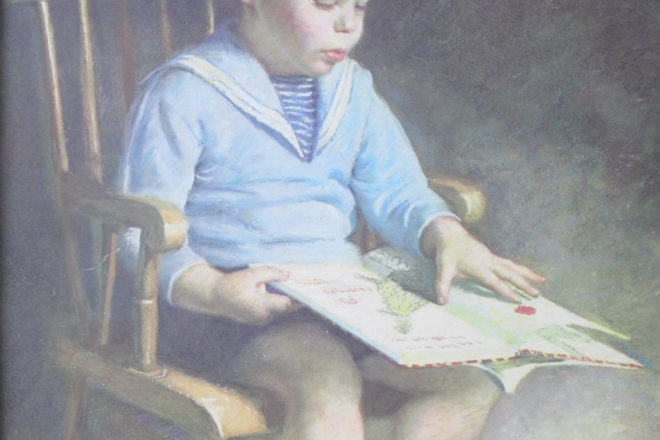 There were two portraits. They were high on the wall above my grandparents’ organ in their living room. One was a girl and one was a boy. 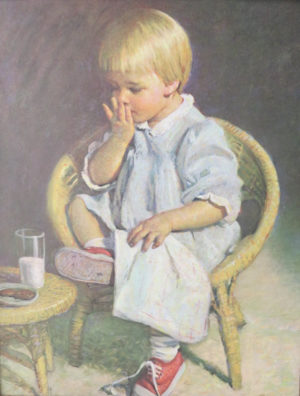 I never knew who painted the originals. When I was young I couldn’t know how much they would mean to me, so never asked any questions about them.

I stared at those paintings often from the time I first remember being in my grandma’s house to about the time I was 10 years old. Her house was on Kolmar Ave in Chicago and, up till that moment in my life, it was one of my favorite places in the world. Those portraits were a big part of that house, and one of the first things you saw when you came in the front door. They looked over everything that happened.

They were there when one of my relatives came home from jail and I was sitting stock-still on the couch right next to my grandma.

They were there watching over me, my brother and sister when we spent the night and slept on a mattress in the living room. I had trouble sleeping in the city and every time a car would drive by my eyes would trail its headlights across the ceiling and every so often the light would illuminate those portraits.

They were there every time I was sick or upset and needed a back scratch from my grandma. Her back scratches were better than any other remedy. I would sit next to her on the couch and lean over so my head was in her lap, and she would scratch my back in circles. She didn’t say anything, but it was magic. When she would do this, I never closed my eyes; I kept them glued to the portraits.

They were there when my grandmother spent her last holiday with us. Refusing to stay in the hospital and unable to move, she was in her hospital bed right under those portraits while we ate our Thanksgiving dinner. That holiday was one of the last times I was in that house and the last that I saw those portraits. 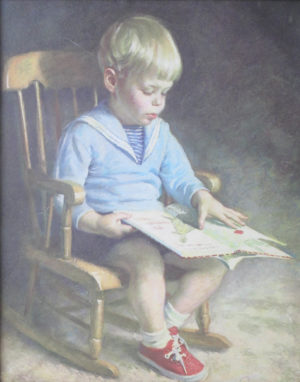 When I see those paintings I can smell a hint of nicotine that clung to everything in her house, I can feel her nails scratching my back, and I can see her smile – I’m convinced it was one of the most beautiful in the world.

Even though I now had a set of my own, I still didn’t know the particulars of the paintings that meant so much to me.

It’s now several years past my 16th birthday and I’m working for the Pulse as assistant editor. I was checking something for our Gallery section and did a Google search of Ingwersen Studio Gallery. I pressed enter and saw in the neat little row of Google images those very same children in red shoes. Sitting in my office chair I felt a pull in my heart. I discovered who created the portraits.

The paintings are titled “Gretchen” and “Gary” and they were done by nationally renowned artist Jim Ingwersen of Ingwersen Studio Gallery in Sister Bay.

Not only had I been living on the same small peninsula all this time with this artist, but this is a man I know, kind of. He wouldn’t remember me, but I served him and his wife coffee and breakfast sandwiches more than a couple summers ago when I worked at a coffee shop in Baileys Harbor. If I had solved this mystery sooner I don’t know what I would say to Ingwersen. I probably would just have said thank you – those reproductions of “Gretchen” and “Gary” are more meaningful to me than nearly everything else I own.