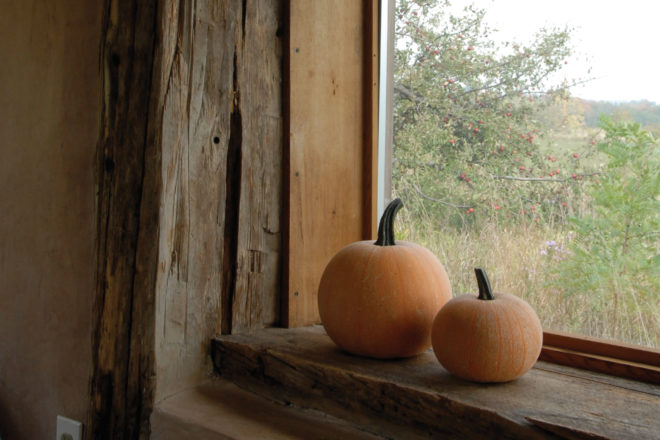 Anyone with a basic working knowledge of children’s mythology knows the dangers of building a house out of straw:  a mere huff or puff from an irritable wolf can take your house — not to mention you — permanently out of commission. A small community of builders and homeowners in Door County, however, are disregarding the moral of the first little pig’s tale and adopting straw as their primary construction material. Their numbers are growing, and their homes — far from blowing down — are thriving.

Though it’s still an unconventional movement in many ways, straw bale construction is by no means a new practice. Straw has been used as a home-building material in the U.S. ever since the late 1890s, when rural Nebraskans first realized that building with straw could help compensate for the lack of wood in their prairie landscape. The practice became relatively widespread by the 1920s, and many of the structures built then are inhabited to this day.

While northern Wisconsin does not share Nebraska’s want of wood, it does boast a plentiful supply of straw and of people looking for affordable, sustainable ways of building homes. At the moment, Door County is home to more straw bale structures than one might think, including at least two complete homes, two homes currently under construction, about a dozen in-home additions and studios, and a chicken coop.

There are countless variations on “typical” straw bale design, but they all share one common feature:  walls filled with baled straw, much like the bales that cushion hayrides or dot autumn farm fields. Most straw bale homes fall into one of two categories:  post-and-beam structure (in which straw bales fill in a wooden skeleton that supports the roof’s weight), and Nebraska-style, load-bearing structure (true to its prairie roots, this building style features no wood; the roof rests directly on the straw itself). No matter what their wall design, most straw bale structures rest on a conventional concrete foundation, with the bales raised at least several inches off the ground to prevent ground moisture from encroaching into the straw.

Once the bales are in place, stacked on top of one another like bricks, they are covered in plaster (most builders in Door County recommend lime plaster for its adaptability and vapor permeability). The resulting walls — usually over a foot thick — roll and undulate along the contours of the straw they contain. The effect is warm, solid, and inviting, more like a fairy-tale gingerbread house than the flimsy shack of “Three Little Pigs” fame.

Like the houses they create, these building techniques are not set in stone. Though he’s unanimously acknowledged as one of the best-informed figures in Door County’s alternative building community, straw bale homeowner and builder Erik Frost emphasizes that straw bale building is still a learn-as-you-go process:  “Nobody’s got something written down that says, ‘This is how you do it.’ We’re all sort of teaching ourselves.” Nan Helscher, who is in the process of building a straw bale home south of Fish Creek, agrees:  “We’re all sharing our knowledge and working together. That to me is a real benefit.”

Door County’s straw bale homeowners seem uniformly pleased with the results of this experimentation. Helscher loves the “soft lines and organic shapes” straw bale homes offer, as well as the way they “nestle into the landscape.” Linda Cockburn, who with her husband, Russ, owns a straw bale chicken coop and home addition, compares straw bale walls to “a big hug. There’s an awe factor, and it’s got personality because it’s not just harsh lines.” Frost says, “It feels very clean, nice to be in. Some even say,” he adds, “that it feels like a manger.”

In addition to its aesthetic appeal, straw bale construction offers a list of benefits so long it could appease even its most pragmatic skeptics. Russ Cockburn, who now stands at the leading edge of straw bale construction in Door County, admits that he initially harbored significant doubts about straw’s viability as a building material:  “My first impression was that it would be a fire hazard, that it would not last very long, and that insects and rodents would get in.” Other common concerns include straw’s susceptibility to mold and rot, as well as its capacity (or lack thereof) to insulate against harsh northern winters.

Straw bale builders have heard all these concerns and more, and they have thoroughly researched responses to every one.

Flammability? As it turns out, straw bale homes fare at least as well in flammability tests as conventional homes; the oxygen-poor density of the tightly packed straw means that when straw bale homes catch fire, as Cockburn puts it, “everything but the walls burn.” It’s bales of hay, not straw, that are famous for their spontaneous combustibility.

Durability? The dozens of intact century-old straw bale homes in Nebraska testify to the technique’s longevity. Cockburn points out that because straw is “just like little pieces of wood, if you keep it dry it’ll last as long as wood will.”

Moisture? Though vapor-permeable lime plaster walls may seem dangerous to a house made of straw, Frost points out that allowing moisture to pass through the walls at a small but constant rate prevents rot-inducing moisture buildup in any one portion of the wall.

And insulation? As an insulator, straw is hard to beat:  whereas a conventionally-insulated wall has an insulation R-value of about 9, most straw bale walls earn R-values between 40 and 50.

Straw’s heat efficiency can save straw bale homeowners significant amounts of money in the long term, adding to the financial benefits of a process that is already estimated to cost 20 percent less than a conventional home. But the benefits of straw bale housing reach far beyond the financial realm. Most Door County builders cite sustainability and ecological concerns as some of their primary reasons for choosing straw bale.

“Straw’s a waste product,” Frost points out, which means that straw bale builders are paying local farmers for something that might otherwise sit unused in the field. Buying building materials locally not only bolsters local economies, but also cuts down on the cost and carbon emissions of material transportation. And a straw bale house is almost entirely biodegradable – so, Cockburn says, “If you tore down a straw bale house, you could basically plow it into the ground and there wouldn’t be a lot of nasty stuff left.”

Despite the many proven benefits of straw bale housing, skepticism from the conventional building community can prove a difficult obstacle for would-be straw bale builders to overcome, particularly because it can block project funding. Relative ignorance of the straw bale process, combined with the lack of similar buildings to use as price comparisons, can complicate bank loans, building inspections, insurance, and resale for straw bale homes. Russ Cockburn laughs when he remembers the first time he asked a building inspector about straw bale construction:  “He said that he’d never really heard about it, but he thought as long as I followed the instructions on the package I’d be fine.”

But to builders like Frost and Cockburn, it is this very lack of packaging that makes straw bale construction so appealing. Frost reflects, “It’s my business in some sense or another to build things, but I hold on to this fantasy that I’m an artist, and straw bale is a lot more fun to work with. [Conventional] four-by-eight sheets are the bane of a person’s existence. Here, you sculpt the straw, and the plastering is enjoyable, quiet, methodical.” With conventional building, Frost says, “it’s bang, bang, bang, all day long.” With straw bale building, he says, miming the rhythmic application of plaster onto straw, “it’s shhh, shhh, shhh.”

Cockburn readily admits that straw bale construction is not for everyone:  “I don’t push it on anybody. But I do think it’s a really good way to build.” As more and more straw bale homes pop up around the peninsula, it seems that quite a few people in Door County agree with him. Asked to think of drawbacks, Frost pauses and scratches his head. “You know, I’m sure there are some. But I add up all the reasons and I can’t see why not to do it.”