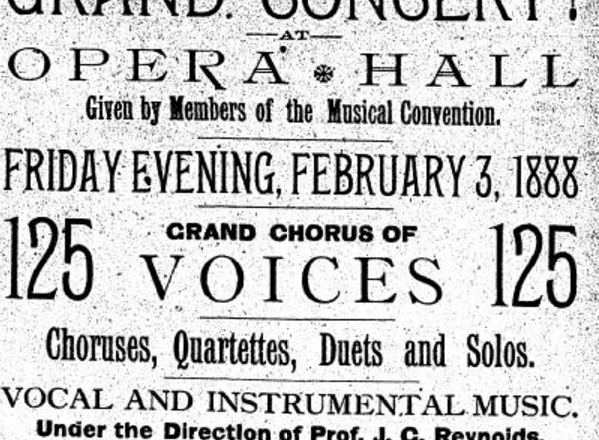 Petty thieves are getting plenty. We heard of many depredations being committed by them. The people had best keep their seven shooters in trim.

It was discovered that the action of the voters of the Tornado school district, at school meetings held Dec. 26 and Jan. 2, in regard to lengthening the school year, was illegal as both meetings were held on a legal holiday. Therefore another meeting was called for Jan. 28, at which the same matters were brought up, and it was decided to have one month more school. It was also decided to build a wood house for the school.

HAS GIVEN IT UP.

The Ann Arbor Steamers Give Up The Menominee Route.

The Toledo & Ann Arbor railway managers have come to the conclusion at last that winter navigation on Green Bay is too costly. It has been proven, however, that the port of Menominee can be reached at any time during the winter, but the expense of reaching it is enormous. It is stated that the coal burnt by the boat on this trip alone cost $150 a day, while the freight for the 22 cars is said to have amounted to only $220.

The Hagemeister Brewing co. commenced to put up their supply of ice Tuesday morning at their brewery in the town of Sevastopol.

Sturgeon Bay has the distinction of having the shortest man in the U.S. army. Private Edward Torstenson, who by standing straight and stretching himself to his fullest height measures exactly five feet.

While Sturgeon Bay has the distinction of having the shortest soldier in the service, the city of Wausau claims the tallest in First Sergeant Louis Hinrichs, who stands six feet, four inches.

It is a peculiar coincidence that the shortest and tallest of Uncle Sam’s soldiers are in the same company, both men being members of Co. G, 128th Infantry.

Private Torstenson was rejected the first time he made application on account of being below the standard regulation height. Later the requirements were changed and he succeeded in getting accepted.

Pastor of St. Joseph Church Elevated to The Dignity Of a Domestic Prelate By Pope Pius XI of Rome

In recognition of his outstanding services to the church and to the community as well during forty years, Father Broens of St. Joseph’s church has been elevated to the dignity of a Domestic Prelate by Pope Pius XI.

It was especially the hardships and sacrifices of the early years, so well remembered by the older generation, which were made known to the Holy Father by the Right Rev. Bishop Rhode of Green Bay. It may be considered an honor bestowed upon the people of Door county, as well as upon the recipient.

The appointment makes the recipient a member of the Papal Household. A Domestic Prelate, or Monsignor, as he is usually called, enjoys some special privileges, should he ever visit Rome, and also at home. He can always be recognized by the purple rabbi. In church he usually wears purple robes and his house garments are also different from those of other priests. In fact, he is dressed and addressed as a bishop, however, without special jurisdiction or episcopal responsibilities. He remains pastor of St. Joseph’s church and Dean of this section of the Green Bay Diocese as before.

Stained glass windows depicting the Wisconsin Indian, the fishing, logging, and sailing industry on Door county were placed in the Door county museum this week on the west side of the building, and within the week the interior of the building will be virtually complete, H.E. Dankoler, in charge of operations, announced this week.

The windows, which were donated by L. M. Washburn, are done in many beautifully blending colors, and add much to the appearance of the building. Their full beauty can best be appreciated when viewed from the interior of the building.

The fireplace, made up entirely of Door county stones from various sections of the county, has been completed, and across the mantlepiece the motto has been burned into the wood:  “The Past the Present, and the Future Cannot Be Separated.”

WPA laborers working on the building will finish their work this week, with the exception of two carpenters who will be retained to make the finishing touches.