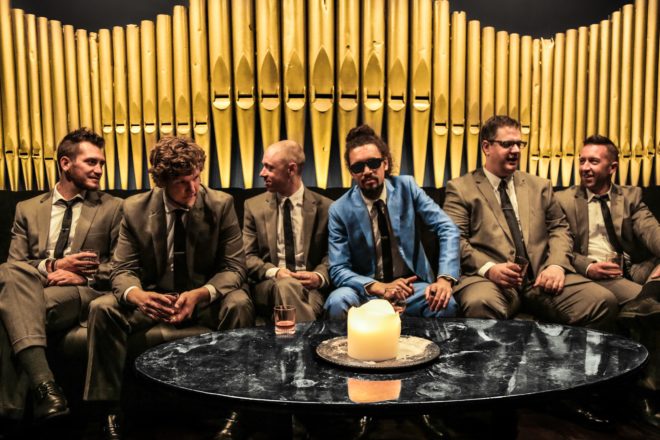 Nooky Jones takes the stage at the Peg Egan Performing Arts Center on July 8 at 7 pm.

After three years of captivating audiences with their unique blend of soul, jazz and undertones of hip-hop, Minneapolis-based Nooky Jones released their debut self-titled album on July 28, 2017 via Young & Foolish Records. A truly cohesive collection of love stories and music that takes listeners to beautiful places alongside deeply provocative characters, the album is an artistic expression of self for vocalist/frontman Cameron Kinghorn.

Produced in the course of 15 months at RiverRock Studios and The Hideaway in Northeast Minneapolis, Nooky Jones’ debut album relies on each musician’s unique style as a critical part of the overall sound. Atop airtight yet comfortably loose drum and bass grooves, often reminiscent of ‘90s R&B and hip-hop, layers of harmonically complex piano, organ, and Fender Rhodes create a lushness associated with jazz that rarely integrates into pop music so tastefully. A non-stop rollercoaster of emotions, the album masterfully draws the listener in with slow burns that eventually boil over, only to be brought back down and start over again.

The Peg Egan Performing Arts Center is located on Church Street in Egg Harbor. In case of rain, all concerts are held at the Calvary Methodist Church, 4650 Cty E in Egg Harbor. Carry-ins welcome. For more information call 920.493.5979.