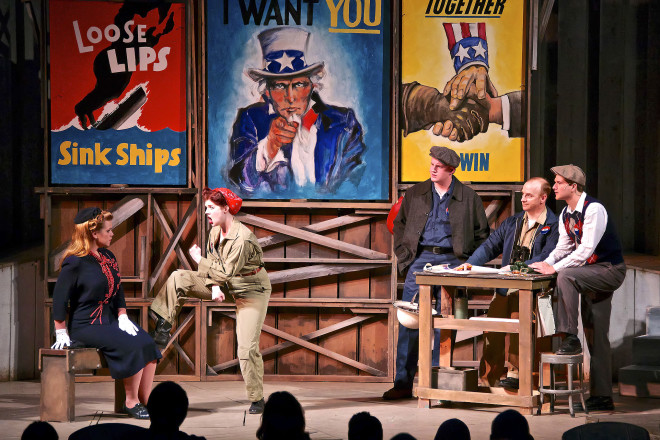 This September and October, one of Northern Sky Theater’s most beloved musicals will be performed at Marquette University’s Helfaer Theatre. Loose Lips Sink Ships originally premiered on the Northern Sky stage in 2001 (then, American Folklore Theatre) and is a collaboration featuring music by James Kaplan and book and lyrics by Laurie Flanigan-Hegge and local real estate broker Jacinda Duffin.

Loose Lips Sink Ships has been called a love letter to the “Greatest Generation.” The musical pays tribute to the men and women of Sturgeon Bay, their willingness to work for the greater good, their love for this country, and their courage. With almost 20 original musical numbers, Loose Lips captures both the swinging sweetness and the bittersweet realities of the 1940s.

In writing the play, Duffin and Flanigan-Hegge interviewed more than 20 people, including women who had worked in Sturgeon Bay’s shipyards, where most of Loose Lips is set.

Of Northern Sky’s 2013 production of Loose Lips, Mike Fischer of the Milwaukee Journal-Sentinel wrote, “At its heart, Loose Lips is a poignant and emotionally complex homage to the men and especially the women of what we rightly remember as the Greatest Generation. Forget the beaches, fish boils, and cherry pies. This show is reason enough to go north.”

Loose Lips Sink Ships is playing as part of Marquette University’s “Celebrating Strong Women” theme. The production will run on select nights from Sept. 24 through Oct. 4. Tickets and more information are available at marquette.theatre.showclix.com or by calling 414.288.7504.